Jeremy Jojola is the recipient of the Don Bolles Medal, which is awarded by the Investigative Reporters and Editors organization. 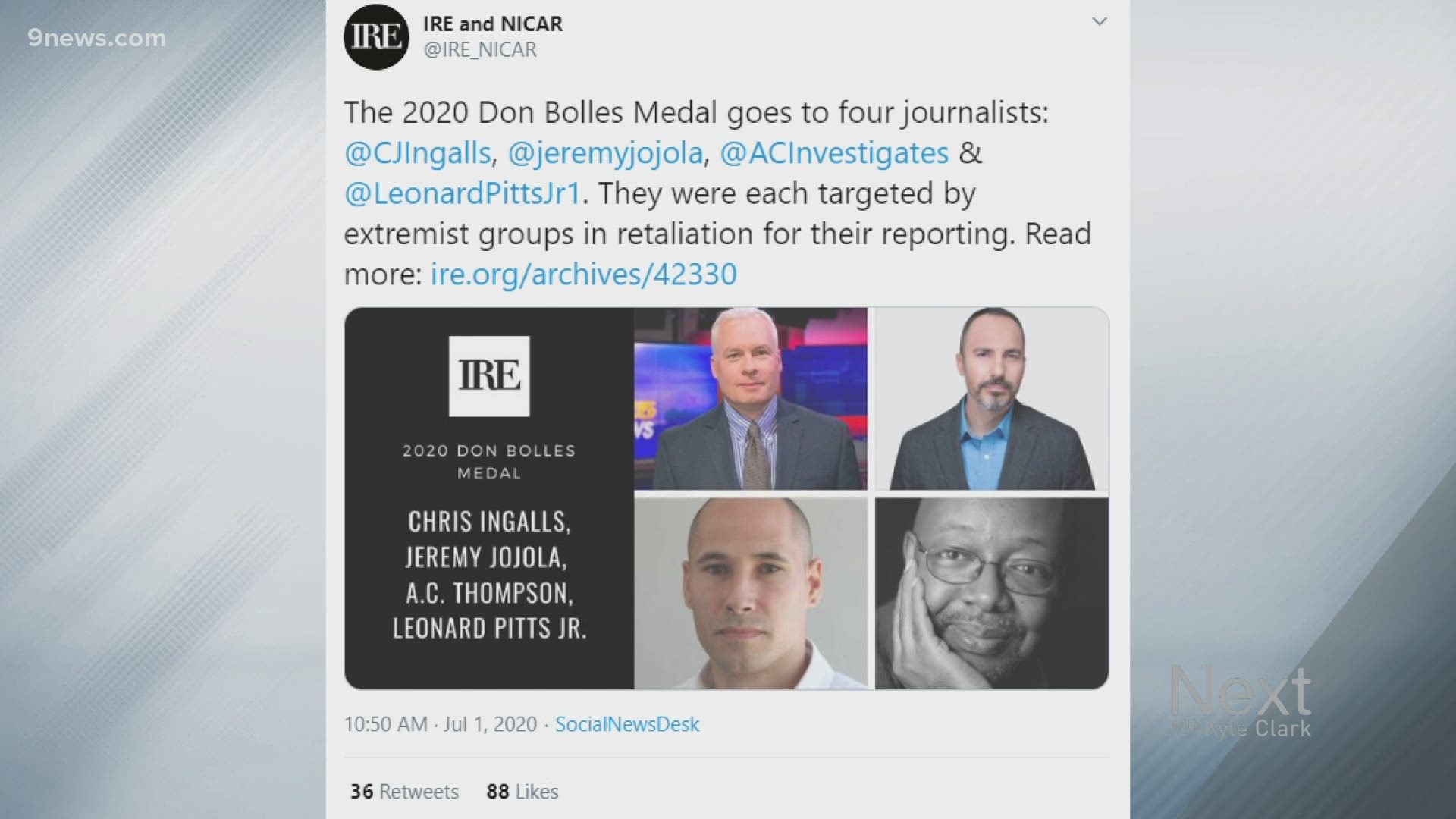 DENVER — Jeremy and I have worked together for many years.

We hired him at 9NEWS after seeing a story he’d done on a guy illegally dumping trash in the desert outside of Albuquerque, New Mexico where he worked as an investigative reporter. While Jeremy was asking the man questions, he tried to run Jeremy over – and hit his news car.

It was then that I knew Jeremy was one of the bravest reporters I’d known.

Jeremy would need that bravery this year when he started investigating white supremacists and extremist groups in Colorado. In a series called Homegrown Hate, Jeremy lifted the veil of secrecy from numerous local extremists.

He spent weekend afternoons attending rallies where groups would protest immigrants, the LGBTQ community and minorities. He listened to their chants, followed their social media posts and asked their members hard questions about their activities and the targets of their vitriol. One of these men was considered the de-facto thought leader of a group that has recently disbanded -- Attomwaffen, a well known international neo-Nazi group.

RELATED: A prominent neo-Nazi lives in an apartment not far from downtown Denver

Jeremy's also reported on smaller yet more locally influential groups as well. And it was members of a local neo-Nazi group that showed up on the doorstep of Jeremy's home earlier this year while his wife and newborn baby were inside.

When no one answered the door, those men called Jeremy from in front of his house. He could see them on his security camera. Police who responded to the scene told us this was a form of intimidation, that these men were trying to send a message.

As journalists we are well-aware of what that message is. It's one we hear almost every day, though not in such a threatening manner: Shut up, stop doing stories on us, we don’t like what you are reporting, we don’t like the light you’re shining on us, on our message, on our activities.

Hate breeds in the dark. Only when confronted and exposed do people understand what groups like this are about. That is what Jeremy has been doing, shining a light on groups that spread intolerance and hate. It’s what Jeremy still does to this day. The threats, the intimidation did not and will not stop Jeremy’s reporting.

And now, Jeremy and three other American journalists are being honored for their bravery in exposing groups like this across the country. The Don Bolles Medal is awarded by the non-profit investigative reporting organization Investigative Reporters and Editors to shed light on the sometimes dangerous work journalists do.

Jeremy is being honored along with Chris Ingalls, an investigative reporter for our sister station in Seattle, KING-TV, A.C. Thompson, a reporter with ProPublica, and syndicated columnist Leonard Pitts Jr.

“These four amazing journalists epitomize the essence of this award,” IRE Board President Cheryl W. Thompson said in a statement. “The threats of violence and intimidation they and their families faced from extremist groups are things that no one should have to deal with just to do their job.”

Jeremy is a long-time member of IRE -- so am I and the rest of the 9Wants to Know team. There are too many members at 9NEWS and other TV, radio, print and online news organizations in Denver and Colorado to name here.

In its release about why Jeremy was chosen for this award, the IRE committee that chose him said:

Jeremy Jojola of 9NEWS in Denver, who reported on local neo-Nazis and a group known as the Proud Boys, was targeted by extremists who visited his home when his wife and child were there alone, court records show. One Proud Boy member threatened Jojola in a tweet that warned: “You are the enemy of the American people we will bring this to your home your work your child’s school. The way antifa does to us. … The fury of America is upon you and your communist friends.”

Those of us lucky enough to work with Jeremy have known about his bravery for years, but it’s good to know it’s now being recognized across the country. Local journalists work really hard every day to bring the news to their communities, whether they are investigating corruption, like Jeremy, or standing in the snow or rain to report on destruction from Colorado storms, or highlighting hometown heroes who do amazing things.

Journalists do what they do because it’s the right thing to do.

About the Author: Nicole Vap is the Director of Investigative Journalism at 9NEWS, where she manages the 9 Wants to Know team.