Before you learn to ski, you've got to take the green trails, but one skier found herself back on the bunny slope even after skiing for 40 years. 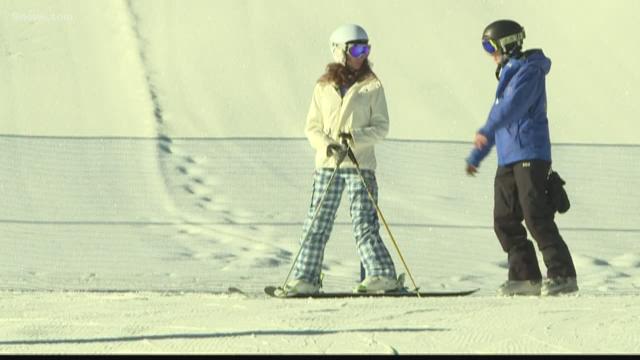 On Sunday morning, there were many people learning to ski on the bunny trail at Winter Park.

Shweta Broberg was one of them, and she's taken a few tumbles this morning.

"I'm going to ski on one leg," said Broberg.

She was born with only one, and on Sunday she had an experienced crew of people without limbs to help her along.

“So my leg is amputated below the knee," said Emily Harvey, the founder of LIM 359, a group that encourages people to get active even while missing an arm or a leg.

His wife is missing both her arms and her legs.

Chris Lentz is an experienced skier, but Sunday brings her back to the beginning once again.

“The very first time, so we’ll see how it goes," she said.

"But she skied for 40 years before prosthetics," said her husband.

Her arms and legs were amputated 4 years ago after she got the disease, sepsis.

“She shouldn't have survived, she was so sick," said Mike.

She took drugs that saved her organs from failing but cut off circulation to her limbs.

Ever since she's been waiting for this moment.

And before she can fly again, she's got to start where all the little ones are.

"Cruising the magic carpet," said her husband, holding a camcorder to capture the moment.

Even her parents get to watch their 50-year-old daughter learn to ski a second time.

On her third run, Chris went by herself and proved she was ready for a step up from the bunny slope.

"Look the instructor is blown away," said her husband.

She said that before her amputation she was pretty bad at using her edges, but today she thinks she's getting it.

“I finally learned how to do it right, all these years I just needed to go to ski school," laughed Chris.