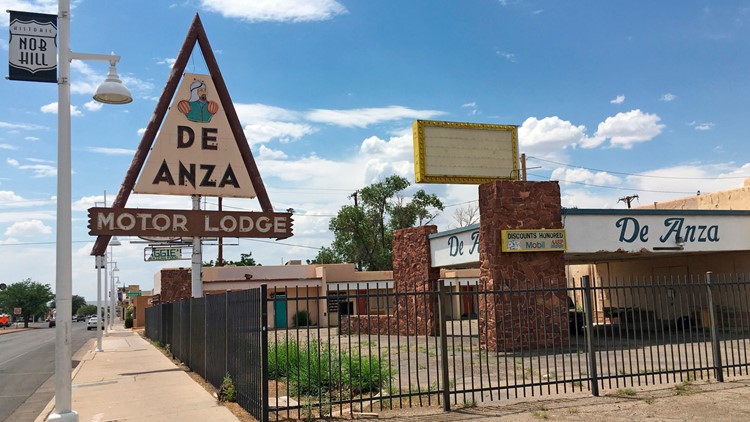 Photo by: AP
FILE - In this June 24, 2016, file photo, the closed De Anza Motor Lodge sits along Route 66 in Albuquerque, N.M., and recently has been highlighted as one of the few places that allowed black travelers to stay during segregated times. " The Oscar-nominated interracial road trip movie "Green Book" has spurred interest in the 20th Century guidebook that helped black travelers navigate segregated America. (AP Photo/Russell Contreras, File)

Travelers can retrace 'Green Book' path with some research

ALBUQUERQUE, N.M. (AP) — The Oscar-nominated interracial road trip movie "Green Book" has spurred interest in the real guidebook that helped black travelers navigate segregated America. With a little research, travelers can find copies of "The Negro Motorist Green Book" online and retrace the route in the movie or develop their own tours of sites that once provided refuge to African-Americans.

The Peter Farrelly film follows an Italian-American bouncer, played by Viggo Mortensen, as he drives a prominent black classical pianist, played by Mahershala Ali, during a 1962 music tour through Jim Crow-era America. To avoid conflict and to protect the pianist, Mortensen's character uses the Green Book — a guide published from 1936 to 1966 by Harlem postal worker Victor H. Green.

The Green Book offered black travelers tips on places to eat, visit and sleep while on the road. The taverns, hotels and gas stations were often black-owned and were identified via word-of-mouth or through advertisements.

"Carry your Green Book with you," the book warned readers on its cover. "You may need it!"

Today, curious travelers can find copies of every edition of the Green Book for free at the New York Public Library Digital Collections or purchase replicas from the Camarillo, California-based About Comics publisher. Inside, readers will find listings in almost every state with addresses of places that catered to African American travelers amid of world of "Whites Only" restaurants, hotels and other establishments across the United States.

Some of the places featured in the travel guide still exist, at least as shadows of their former selves.

In Birmingham, Alabama, the city of the final performance in the movie, the once black-owned A.G. Gaston Motel is now part of a national monument established by then-President Barack Obama. The Rev. Martin Luther King Jr. and aides stayed at the motel while planning demonstrations against legalized racial segregation in the city in 1963.

Now abandoned and owned by the city, the motel once was an upscale haven with a restaurant and live music for blacks seeking safety in a place known as the most segregated city in America. It eventually will be refurbished as part of plans that call for it to become a centerpiece of the Birmingham Civil Rights National Monument.

About 90 miles to the south, in Montgomery, King often got his hair cut in a barber shop inside the Ben Moore Hotel, which was a Green Book fixture at the time King was pastoring a church in Alabama's capital in the 1950s. The hotel still stands on a corner, vacant and decaying.

Meanwhile, in Albuquerque, New Mexico, the De Anza Motor Lodge, a business owned by Zuni trader and Indian art collector Charles G. Wallace, along the historic Route 66 is still standing, barely. It offered black motorists opportunities for a good night's rest and a chance to catch a nearby show of American Indian and Mexican-American doo-wop singers. The motel was listed in some editions of the Green Book and is undergoing renovation after years of being abandoned.

The Threatt Filling Station in Luther, Oklahoma, is on the National Register of Historic Places for its distinction as a black-owned filling station along the Route 66 "Mother Road." The Threatt family's recent partnership with historians to preserve the former station and the movie "Green Book" have brought about a renaissance of sorts for the structure, The Oklahoman reported in December.

Charles Becknell, Sr., 77, of Rio Rancho, New Mexico, said he bought a 1954 edition of the Green Book online after he saw the movie. The retired educator plans on visiting some of the sites mentioned in the book to see what's there now. "I also wanted my grandchild to see this book for themselves," Becknell said.

To be sure, some of the sites mentioned in the Green Book no longer exist and the buildings that once housed them have been replaced or torn down.

Frank's Restaurant in New York City's Harlem neighborhood, advertised in the 1959 Green Book edition, is long gone and a new defunct discount store occupies the spot. The former Booker Washing Hotel and Courts in San Francisco, which once offered black travelers "splendidly decorated suites" and a "cocktail lounge," is now a Safeway grocery store and apartments.

Still, visitors can use the guide to visit the sites and see how a place that once provided safe haven has evolved and contemplate what it meant for black travelers more than 50 years ago.

The movie "Green Book" is nominated for best picture at the 91st Academy Awards scheduled to air Sunday on ABC. Mortensen is nominated for the best actor award and Ali as best-supporting actor.