Arnold Serafin's dad taught him all about cigars. When his father died, it was only fitting to create a one-of-a-kind cigar to honor him. 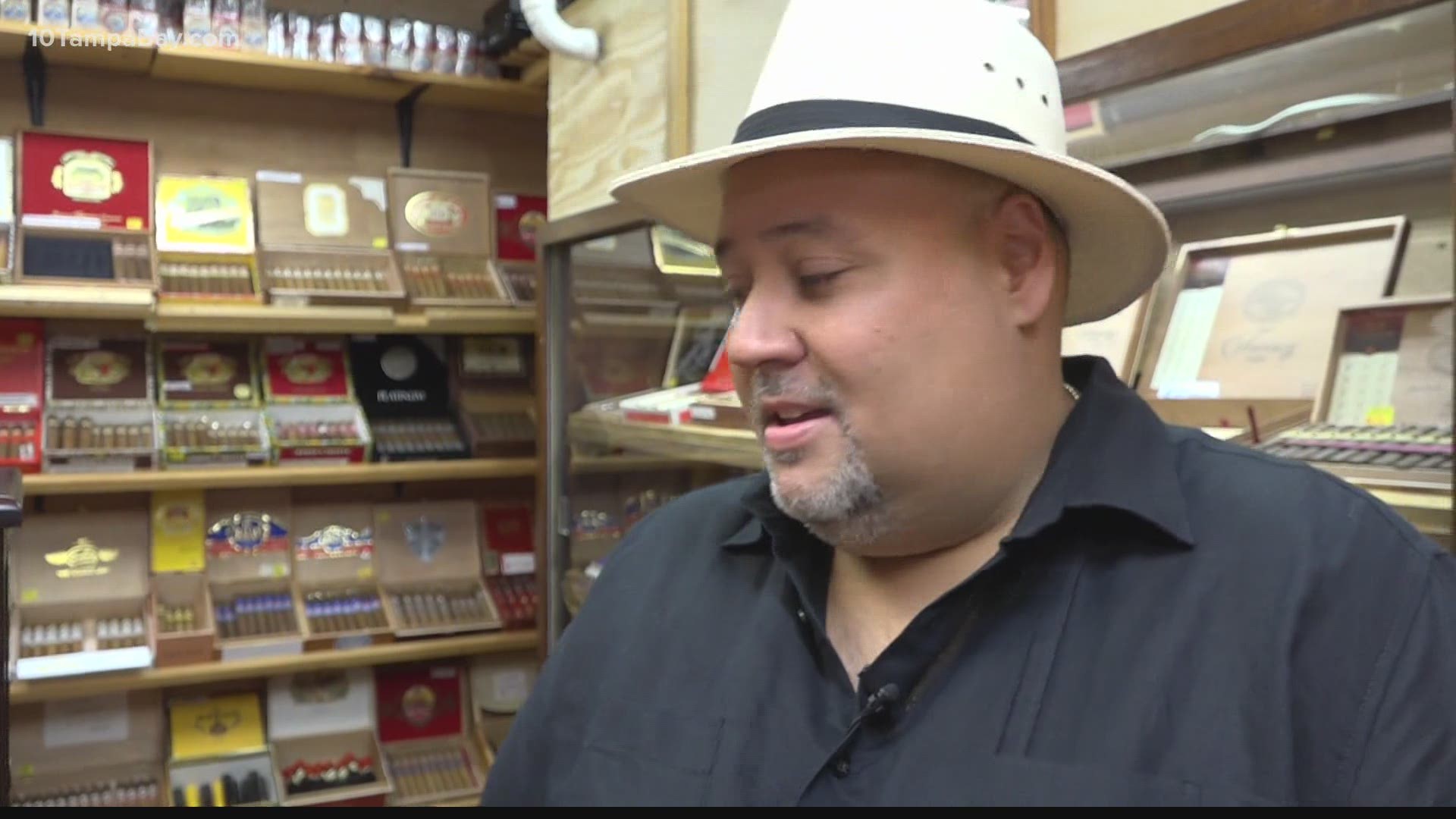 That sound signals the shop owner that another loyal customer has arrived, either to pick up a few stogies, sip some espresso, or just chat.

It’s exactly the vision Arnold and his father envisioned in 2007.

“People always say to me, ‘what’s a Cuban guy doing in Tarpon Springs?'” Joked Arnold. “I really like it here. We came here and have been here ever since.”

Tarpon Springs has a uniquely Greek feel but the Serafin family has carved out its own Cuban corner. One day, while driving through town, Arnold’s father, Ramon, noticed a "For Sale" sign in the shop window.

Ramon made his son pull over to get the information. They eventually bought the place. Both figured it was the perfect spot to put the next chapter of a long family history.

“This is my grandfather, who was from Cuba,” Arnold said, pointing to a brightly colored painting on the wall of his shop featuring portraits of the first three generations of his family’s growing cigar legacy.

Antonio was Arnold’s great grandfather. He was a tobacco grower. Ramon Sr., Arnold’s son, grew up and opened a factory in Las Villas, the central region of Cuba.

His son, Ramon Jr., picked up the family business and eventually came to the United States in 1969 after a three-year stop in Spain. The family first arrived in New Jersey before moving to the Sunshine State.

They settled in nicely.

“I think every Cuban wants to end up in Florida,” said Arnold with a chuckle.

For 14 years, father and son sat at Serafin de Cuba and shared the pleasure of a good conversation and smoke with locals. Bonds formed over cigars and customers took a particular liking to Ramon Jr.’s personality.

Arnold tried his first cigar at 14. He was visiting Cuba and told Ramon Sr. he’d love to take some authentic Cuban cigars back to Florida. Ramon Sr. gave his grandson 100 pesos, sent him to a neighbor for tobacco leaves, which he then rolled into “the best cigar” Arnold ever had.

“This is where the magic happens,” he said, leading the way into his spacious humidor at Serafin de Cuba, which he guesses holds about 10,000 cigars.

Arnold recently added well-known Tampa Bay area brands to his shelves, like Flor de Tampa and the Tarpon Sponger. He carries “top shelf” items like the Opus X, yet, of all the cigars on the shelf he’s most proud of the one honoring the man who helped him start the shop.

“He had a bad heart. He had a heart condition,” said Arnold of his dad.

Ramon Jr. died in 2019. Arnold knew he was going to create a one-of-a-kind cigar to memorialize his dad.

Arnold began work on making the cigar. It took over a year to complete the artwork and branding. He had the box custom-made. He cut it to his father’s favorite size using his favorite tobacco. He named it the Serie don Ramon 1942, after the year his dad was born. He even made a label using the portrait from the family painting in the shop’s entryway.

“I don’t know if he’d be too happy about it. He was a humble guy. He would laugh about it, though.”

Ramon Jr. passed on his passion to Arnold, who has passed it on to his son, Brandon. The fifth generation of cigar growers and rollers runs his own shop in Spring Hill.

Many customers are only learning about Ramon Jr.’s death now after returning to the area after an extended time away due to the COVID-19 pandemic. They have scooped up nearly 100 boxes (20 cigars in each) of the ‘1942’ cigar as a tribute to Ramon Jr. Arnold says many others have picked up singles as well.

“At the end of the day, he loved the fact that people like to come see him and talk to him” he said with a smile.

Ramon Jr.’s obituary card sits on the cash register at Serafin de Cuba. It’s likely never to come down. The walls are covered with photographs of him and other family members enjoying good times over cigars. There’s even one of him smiling with then-President George W. Bush by the shop entryway.

For Arnold, cigar sales are good. But, cigar memories are better. He hopes anyone who picks up a ‘1942’ understands the love that went into the process and the person for whom all that work attempts to honor.

“If they knew dad, I want them to remember him and if they didn’t know him, I want them to say, ‘Hey you know what, it’s a great cigar’ and enjoy it with your family and your friends,” he said. “That’s basically what that cigar’s about. Creating memories.”

In a family full of traditions, the newest one is off to a celebrated roll-out.