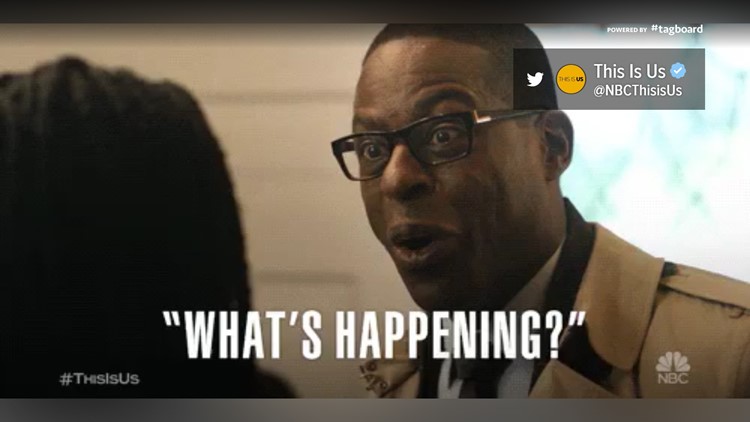 ST. LOUIS — Editor’s note: This contains spoilers to the season 4 premiere of ‘This Is Us’

The season 4 premier of ‘This Is Us’ had a lot of people confused… for the first hour.

This week’s episode was an extended version and went 8 minutes longer. The last 8 minutes is basically when everything started making sense.

But for the first hour, the whole internet was confused.

So, we knew there were new cast members, but we had no clue what their roles would be.

Here’s how the episode starts… Scenes from Rebecca and Jack’s third date, their trip to Los Angeles.

And then… everyone becomes confused because of all these new people.

My personal thoughts during the episode… What is going on?! Who are these people?! …Still confused, oh wait! There’s Jack again. And now I’m confused again...

Then we see Rebecca and Jack again. The two go out to eat at a fancy restaurant with Rebecca’s parents… and things got a little weird.

Rebecca’s dad asked Jack what his parents do for a living.

Jack excused himself after he had spilled a bit on his suit jacket that he borrowed from a store where Miguel works.

He came and sat back down at the table and answered the question, “He hits, she cries… that’s what they do.”

“My little brother? Basically raised him myself,” Jack said. He then goes on to tell Rebecca’s dad he lost his brother in Vietnam. He also told her dad that he's not going anywhere. Rebecca seemed happy with how Jack handled himself to her hard-headed dad.

Rebecca’s dad then seemed like he liked his answers, for a second. He also saw the tag sticking out of Jack’s suit and gave him a little nod. But at the end of the dinner when Rebecca wasn’t there he said to Jack, “I want more for her than you can offer her.”

Jennifer Morrison’s new character, Cassidy, is shown throughout the episode. She’s a soldier. She has a son named Matty and a husband (Nick Wechsler.) After she comes home from the war she has trouble adjusting and at one point she accidentally hits her child.

At the end of the episode we see Deja meeting a boy named Malik (Asante Blackk.) He’s also a father. After Deja met Malik, she went home to Randall and Beth who noticed the big smile on her face.

We also see Kate and Toby with their new baby, who was also shown as Jack Damon throughout the episode. Jack Damon is a singer. He is also blind.

If you’re as big of a fan as we are, join 5 On Your Side’s ‘This Is Us fan group’ on Facebook, click here to join

Can’t wait for the next episode.

RELATED: ‘This Is Us’ returns for season 4, here’s how to watch

RELATED: ‘This Is Us’ makes special announcement in honor of the Big 3’s birthday celebration