They've kept in touch over Zoom, but until Monday night, it had been months since members of the orchestra played music together in the same room. 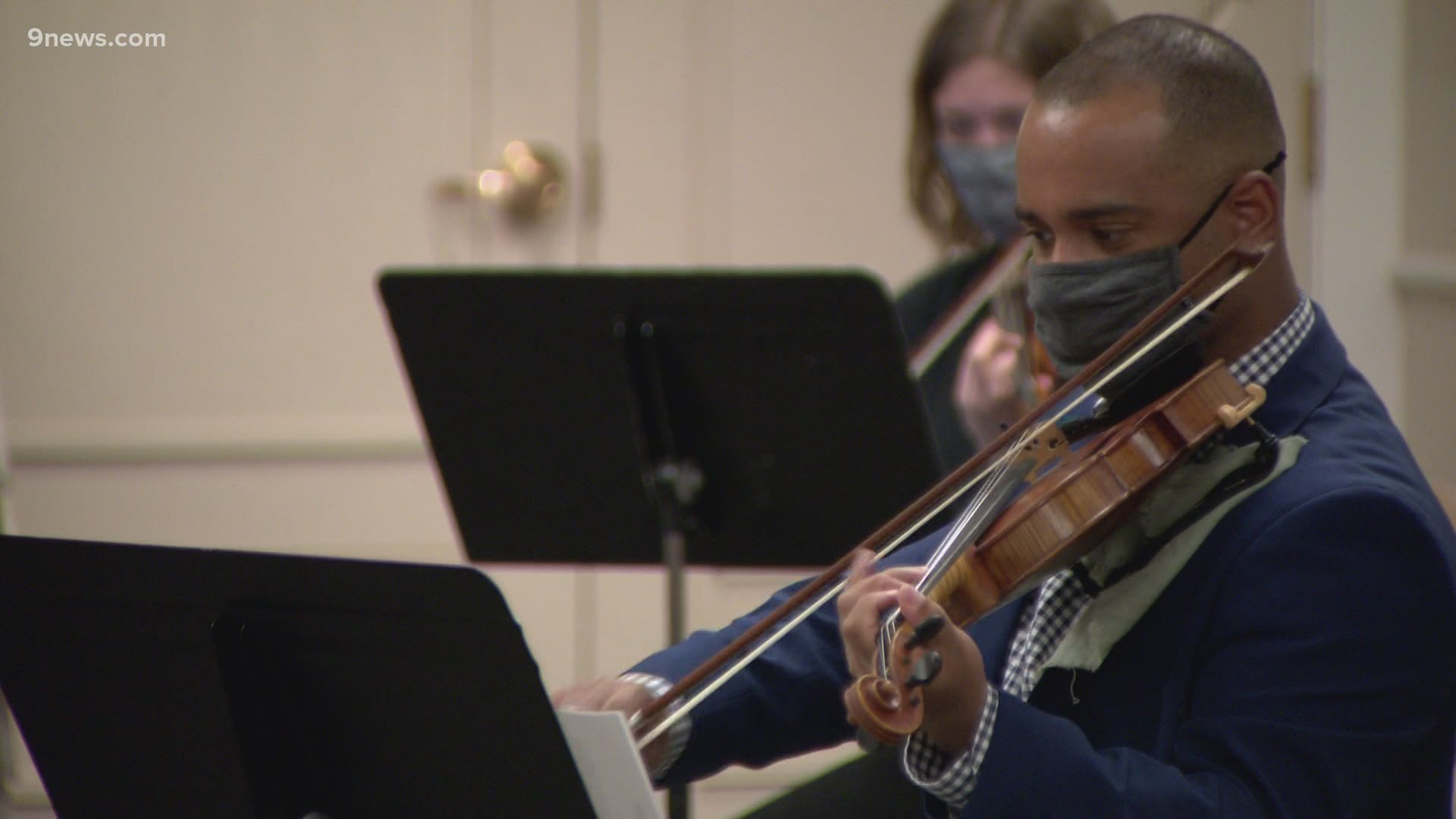 BOULDER, Colo. — Masked musicians sat six feet apart and began tuning their violins and cellos, drowning out the sound of the only wind instruments in the room: two whirring air purifiers.

"Everybody who plays in the orchestra actually is able to wear a mask because we’ve essentially excluded all wind, brass, aerosol-producing instruments," said Devin Patrick Hughes, conductor of the Boulder Symphony.

Monday night, about 20 members of the orchestra filled a large room inside the Grace Commons Church in Boulder to play together for the first time in months.

“This is our first rehearsal tonight," Hughes said. “We have great air filters and we’re just kind of doing everything we can just to keep everybody safe and make everybody feel comfortable.”

Rehearsing felt new for the professional musicians in the room like Hillary Schefter.

“I don’t think I’ve seen my conductor in like a year!" Schefter said. "I’ve seen him on Zoom, but that’s definitely different.”

Schefter, the principal harpist for the Boulder Symphony, spent much of the pandemic plucking strings for an audience of none.

“It’s been kind of devastating on the psyche more than anything I’d say," Schefter said.

On Monday, the musician was thrilled to play music beside other people.

“You get to be a part of something bigger than yourselves while you’re all creating something really beautiful," Schefter said. "There’s really nothing better.”

Hughes was also eager to be back on his conductor's podium.

“I’m definitely ready to plunge back into the life of music," he said.

While practicing felt great, the musicians were most excited to perform.

“We’re doing a little actual live concert at Boulder Theater," Schefter said. "It’s going to be awesome, and I’m really excited because it marks literally a year from when I’ve been on stage anywhere.”

On Thursday evening, the Boulder Symphony will perform two concerts at Boulder Theater featuring works by Debussy, Mahler and Tchaikovsky. Each show will have an audience of 100 people.

“Any audience adds to the performance to the extent that you could be in a dress rehearsal sometimes and play something exactly one way, and then you fill the hall with audience members with warm bodies and it changes the sound," Hughes said.

The conductor said the anticipation of the performance reminded him of how he felt 20 years ago when his career was just getting started.

Come Thursday evening, the Boulder Symphony expects the experience will feel as sweet as it sounds.

“There’s something about being together and making music that is unique and special," Schefter said.