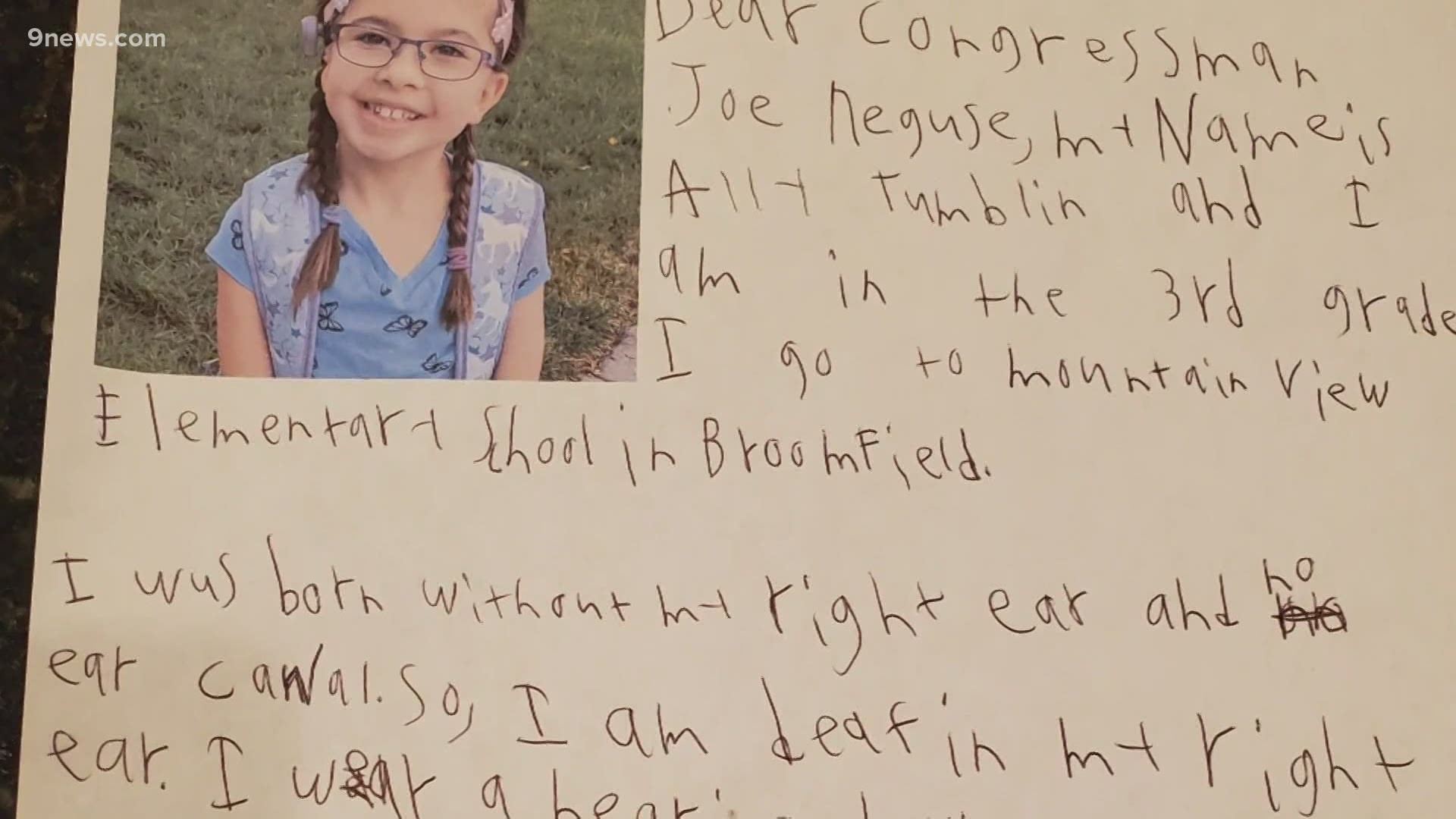 BROOMFIELD, Colo. — When a 9-year-old Broomfield girl, born without her right ear and ear canal, wrote a letter to her congressman in 2019, she and her mother didn't think they would even get a response.

But young Ally Tumblin's letter inspired Congressman Joe Neguse to introduce a bill that would require insurance companies to cover hearing devices for children like Ally, all over the country.

Now, the Broomfield girl is on her way to inspiring a federal law.

"It all started with a homework assignment," said Ally's mother, Melissa Tumblin. The then third-grader and her mom sat down in May of 2019 to write their congressman about something near and dear to their hearts – Ally's hearing loss and the lack of insurance coverage.

"When Ally was born, we were a little surprised that her right ear was gone," Melissa Tumblin said. "I had a perfectly normal pregnancy. I did everything right. As a mother, I couldn’t understand what happened."

The struggle continued as more and more doctors told the Tumblins their daughter's one ear was enough.

Credit: Melissa Tumblin
Ally Tumblin was born with Microtia and Atresia, the absence of her right ear and ear canal.

"On the playground, I would call for her. She would be looking all over to figure out where I was, even looking in the sky, while my other daughter would come right to me," Melissa Tumblin said, recalling her earliest memories of her youngest daughter. "When I went back online to do more research, I discovered this other hearing device specifically for Ally's hearing loss called a bone conduction hearing aid. I was surprised that none of our doctors had mentioned it to us."

By then, her daughter had gone almost a year without the use of one of her ears. The Tumblins learned that Ally had both Microtia and Atresia, the absence of her right ear and ear canal, and needed a bone-anchored hearing aid (BAHA). But the bad news continued, as they also discovered the device she needed was not covered by insurance.

"They are absolutely necessary for the best quality of life for all of these children and adults," Melissa Tumblin said. "I can't see how insurance providers continue to deny coverage for these devices."

At 9 years old, Ally wrote Neguse about her bone conduction hearing aid, and how her device had been denied coverage all her life.

The congressman and father said he was thinking of his own daughter when Ally's letter came across his desk in 2019.

"Thinking about what it would be like if she had to experience the struggles that Ally has experienced, that certainly had an impact on me and motivated me to really take a close look and ultimately get to work on trying to fix it," Neguse said.

Neguse said all the credit goes to the mother-daughter duo because it's really their story that inspired him to take the initiative to introduce this bill.

"They have captured the hearts and minds of many of my colleagues in the Congress, including Senator Elizabeth Warren and Senator Shelley Capito," Neguse said of his Senate partners on the bill. "We're very excited that this is the year that we think that we can get it done."

As support for Ally's Act continues to grow, the Broomfield girl is on her way to inspiring a federal law.

Melissa Tumblin is also the founder of the Ear Community Organization, a nonprofit that has helped thousands of children and adults around the world born with Microtia and Atresia.

"We thought nobody would really respond," Melissa Tumblin said. "But to actually get a piece of legislation in place, and have it be so successful so quickly, it's amazing."