For the past two years, Ty Godwin and Liam Gutierrez have been running together. They've complete 10 races, despite living in separate states and Liam's condition. 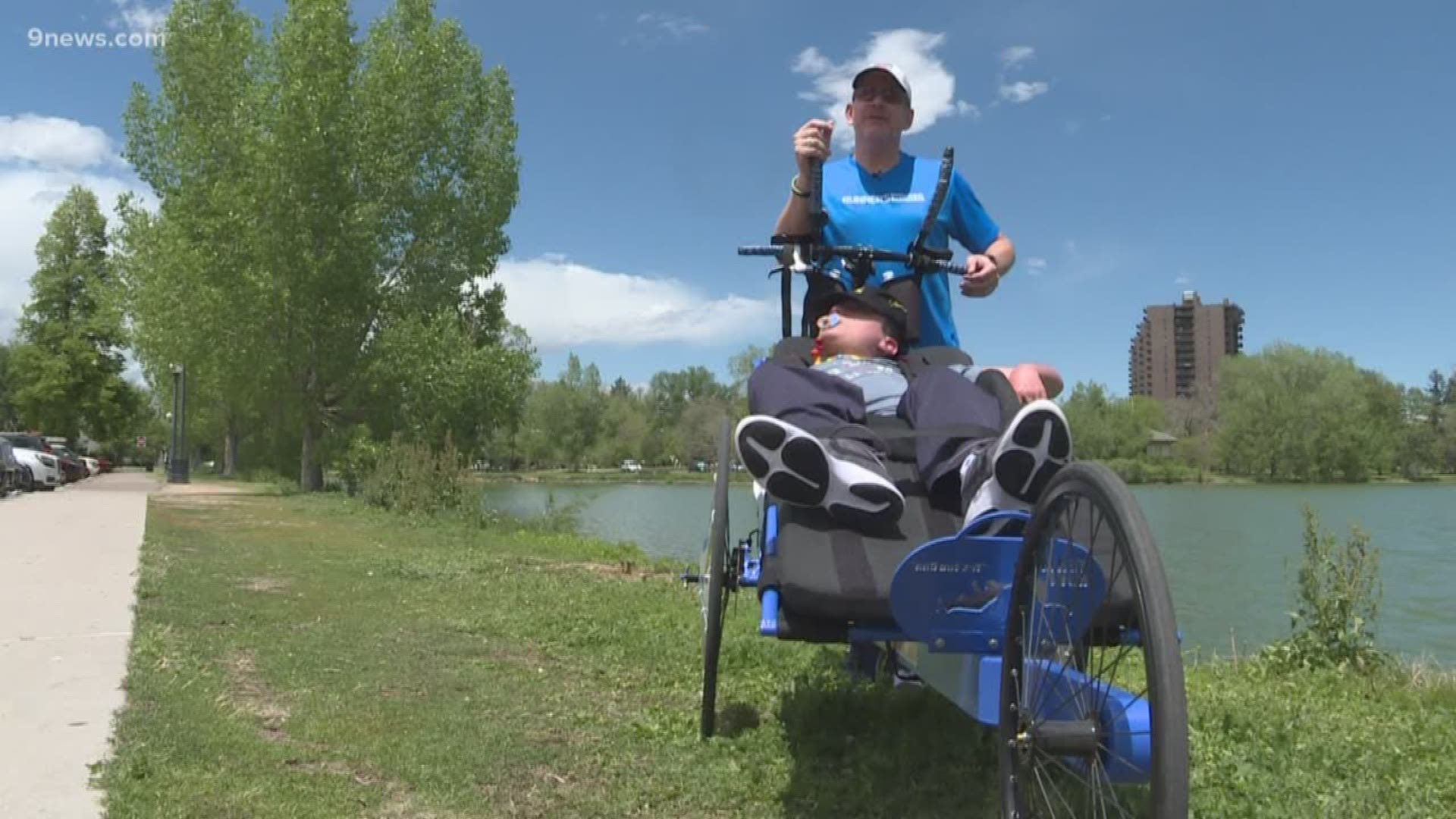 Crossing the finish line in a marathon is an accomplishment worthy of a medal for any athlete. For Liam Gutierrez and his parents, the medals he's received for the 10 races he has completed are nothing compared to the true reward.

Twenty years ago, Liam was born in Naples, Italy. Shortly thereafter, doctors diagnosed Liam with Hydrocephalus. Liam's mother, Joan, explained Hydrocephalus to 9NEWS as "a condition where the brain fluid gets backed up somewhere where it then pushes pressure on the brain tissues." Liam was quickly flown to the U.S. where doctors placed a shunt to address the leak. It didn't take long for Joan and her husband to notice the shunt was leaking, "we had to go back and that kind of started the whole experience of brain surgery after brain surgery," Joan said.

Liam now lives in San Diego with his family. According to Joan, he has had more than 150 brain surgeries. He now has two shunts. At one time, he had four. Joan told 9NEWS that her son "lost his eyesight, has cerebral palsy, hemiplegia, one side of his body he has no control over, and he also lost his ability to speak." Yet on Sunday, Liam Gutierrez completed his 10th race, the Revel in the Rockies Half Marathon.

Liam started racing two years ago with the help of Ty Godwin. Godwin, who lives in Denver, told 9NEWS that he "didn't start running until 2000," and ran his first marathon in 2007.

In July 2015, Godwin joined the organization I Run For Michael and so began his virtual relationship with Liam. "It started out as a very small thing, just posting a sweaty selfie to a private Facebook group on I Run for Michael and it kind of blossomed from there," Godwin said. After two years of sweaty selfies and online conversations, Godwin flew to San Diego to surprise Liam for his 18th birthday and race with him for the very first time.

The first finish line Liam and Godwin crossed together was the Carlsbad 5000. Liam's family borrowed a Blade to allow Godwin to run with Liam somewhat easily. "I wanted to give Liam the same experience that I had, so I very intentionally wanted to go as fast as I possibly could. I literally only practiced with the Blade the day before but it was phenomenal. I flew. We had the GoPro hooked up. He smiled the whole way and I could tell that he just absolutely loved it," Godwin said. Joan said that "it was at that point [they] knew, 'okay, [Liam] needed to have his own running Blade.'"

It didn't take long for the creation of Team Liam. "That opened up a whole world of meeting other people who wanted to help make that happen for him," Joan said.

Once Liam had a Blade of his own, he and Godwin got to work. Over the next two years, the two would compete in nine more races. "Some of Liam’s other complex friends like him have been inspired. They’ve since started racing and have started to explore the world beyond what they thought," Joan said. Liam's world has also grown since he entered the racing world. "He's living the fullest life he can possibly live," Godwin said.

Liam was once confined to a hospital room. Now, his parents take him on vacations to New Orleans because "he loves Jazz" and to Hawaii because "he loves going to the beach and loves swimming." Joan told 9NEWS his life of inclusion doesn't end there. "He's gone fly fishing, hiking through the Rockies, racing, hanging out with college co-eds at the CSU homecoming a couple of years ago...he's even done indoor sky diving," Joan said.

Joan and Godwin attribute Liam's active lifestyle to his entry into the racing world. "It's actually given him better health and it's inspired other kids that are friends with him to do more," Joan said.

Liam is also inspired to do more. His to-do list with Godwin is far from complete. "We aspire to do a half-IRONMAN one day," Godwin said. The avid runner has competed in the Boston Marathon five times and hopes to make it six with Liam leading the way.