9Things to know about the summer solstice

Friday, June 21 is the longest day of the year and the official start of summer. 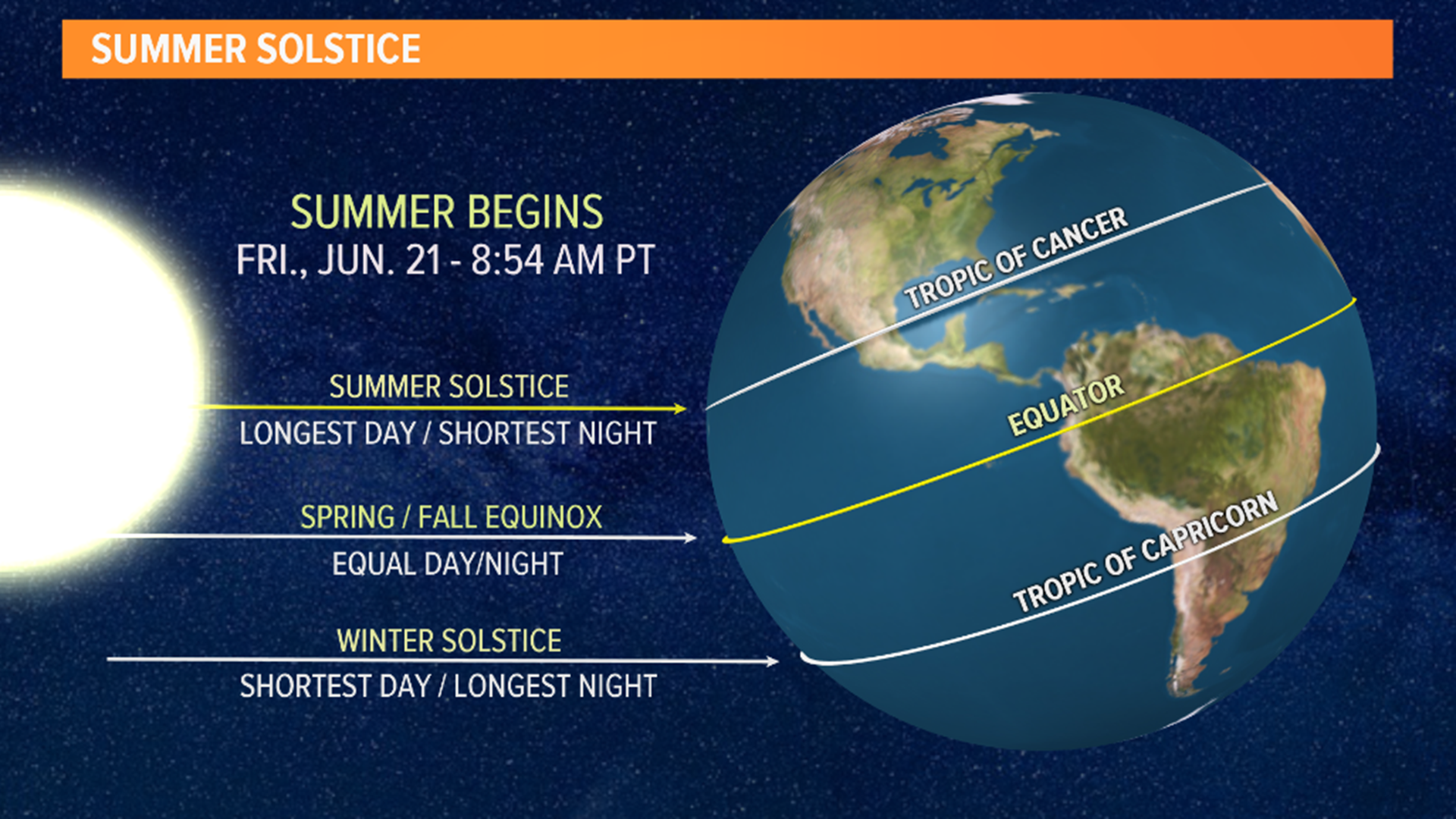 At 9:54 a.m. MT, the sun will be directly overhead the Tropic of Cancer. That’s right: Friday is the summer solstice.

Here are 9 things to know about the summer, or June, solstice:

It’s one of two solstices during the year

The summer solstice is sometime between June 19 to 21 and happens when the sun is directly above the Tropic of Cancer.

The winter solstice, meanwhile, takes place sometime around December 21. That’s when the sun is over the Tropic of Capricorn.

It’s the longest day of the year

During the solstice, the Earth’s axis is tilted as far as it can go toward the sun

The winter solstice is the exact opposite.

"The sun isn't actually moving," Steve Lee with the Denver Museum of Nature and Science said. "It's just how high it gets in the sky.

"The earth is tilted on its axis. The North Pole is tilted toward the sun."

Monday will have 15 hours, 5 minutes and 40 seconds of daylight.

It also marks the first day of summer

Even though most people generally refer to all of June as summer, the season doesn't officially begin until the end of the month.

Lots of ancient monuments coincide with the summer solstice

Like Stonehenge, which is constructed so that when the solstice happens, onlookers see the sun move precisely above its Heel Stone.

WILTSHIRE, UNITED KINGDOM - JUNE 21: People watch the midsummer sun as it rises over the megalithic monument of Stonehenge on June 21, 2005 on Salisbury Plain, England.

In Tulum (which is on the Yucatan Peninsula in Mexico), meanwhile, one building has a small hole at the top that produces a starburst when the sun rises on the summer solstice.

The solstice also had a practical purpose for ancient civilizations.

"Those are the things people needed to feed themselves," Lee said.

Sweden is really into celebrating the summer solstice

In Sweden, they are actually considering turning the solstice – or Midsummer’s Eve – into a national holiday.

During the afternoon, revelers dance around a large pole. During the evening, folks eat and celebrate with friends.

The Arctic Circle has 24 hours of daylight

Due to atmospheric refraction, this phenomenon lasts for a few days before and after the solstice – even from areas as far as 60 miles from the Arctic Circle. In the Antarctic Circle, though, there are 24 hours of darkness!

LONGYEARBYEN, NORWAY - JUNE 21: Mist encircles mountain peaks as the midnight sun reflects off the face of ridges on the West Coast of Spitsbergen early in the morning of Midsummer on June 21, 2008 in Longyearbyen, Norway.

In the Southern Hemisphere, it’s the winter solstice

It’s also their shortest day of the year. In Australia, some folks celebrate with a nude dip into the Derwent River.

It’s the longest day of the year, but it’s not the hottest

It all comes down to how well the planet retains heat.

Think of it this way: In June, many of Colorado’s peaks will have ice at the summit. So, for us to feel the ultimate summer heat, we need snow to melt and our oceans to be warmer.

That doesn’t happen until a few months after the official start of summer.