‘We went all Partridge family:’ Lone Tree family gets musical while staying at home

Cory Cullinan wrote the 'Stay at Home song,' which he performed with his family. 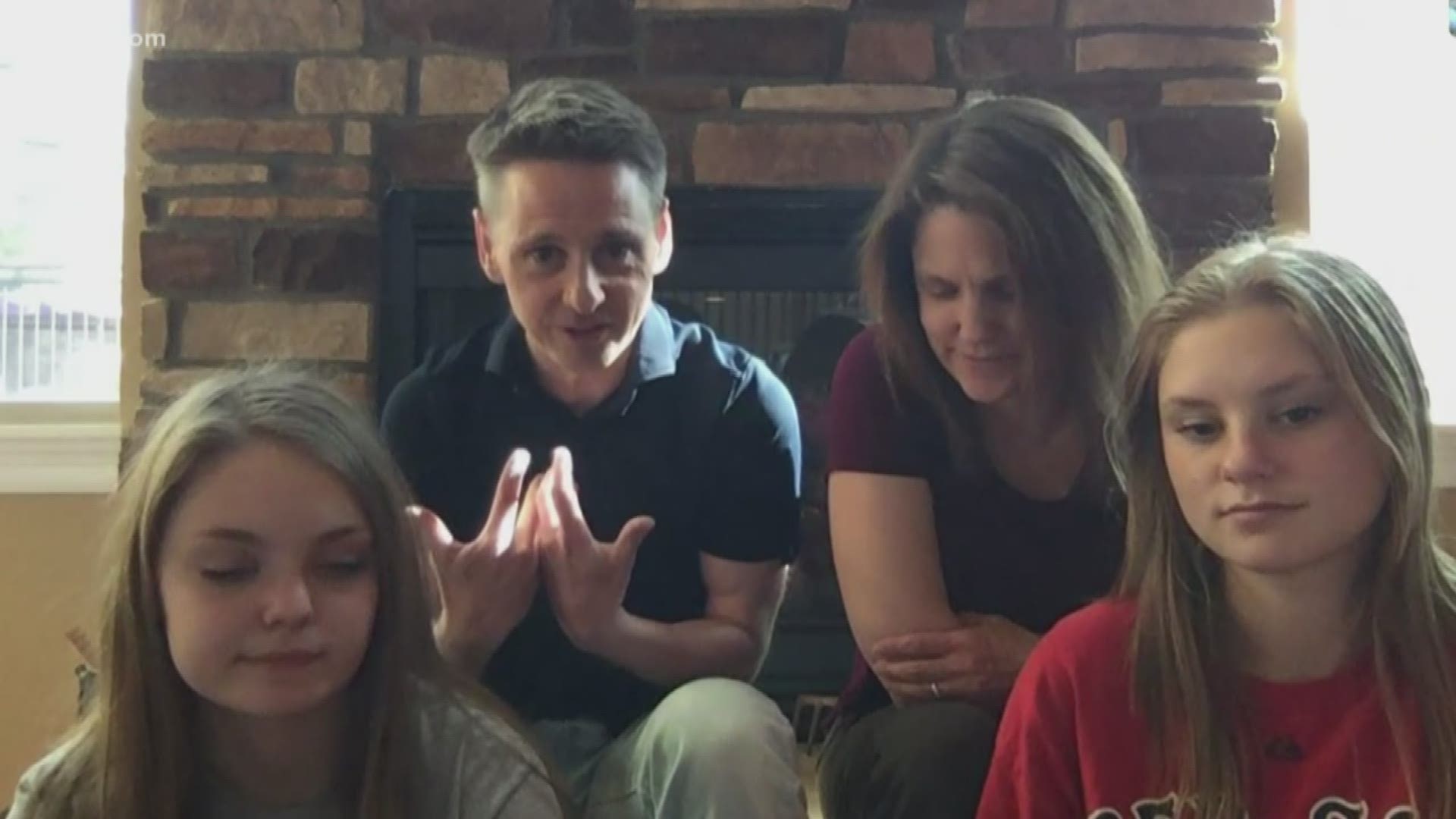 LONE TREE, Colo. — “I’m a cheeseball,” Cory Cullinan said while sitting in front of his family’s living room fireplace. “We all love singing. So, it seemed fun to write a song that would be fun for all of us to sing.”

The Cullinan family, Cory, Janette and their two daughters Riley and Sidney, like most people in Colorado, are all home together, riding out the stay at home orders meant to slow the spread of the virus that causes COVID-19.

“I think we’ve gotten closer as a family,” said 15-year-old Riley, as she, her mother and her sister joined her father in front of their family's fireplace.

“I think the biggest challenge is not being able to talk to your friends and go about normal life like playing sports,” said 17-year-old Sidney, whose soccer season was cut short due to the pandemic. “I kind of miss going to school, which sounds weird.”

Like many families dealing with the realities of being together every hour of every day, the Cullinan family said they have had to find a balance between togetherness and alone time.

The girls said they eat lunch together every day, something they didn’t do before because their lunch times in school were different.

They also said they find themselves with time to do things they once had no time to do.

“We’ve found a lot of things to do,” said Riley. “I got bored one day and I started a puzzle, which I never do.” I know Sidney wants to paint her room, so she got her supplies and we’re going to try it out. That’s something you’d think about doing, but wouldn’t have the time and now we do.”

RELATED: Fun, easy science activities you can do at home

RELATED: 9Things to do at home in Colorado this weekend

Spend any time chatting with the Cullinans and you will see a family that pokes fun at each other constantly and laughs together a lot.

“For better or worse, our kids are stuck with pretty, I don’t know if the word is positive or we have high expectations or delusional parents,” Jannette Cullinan said, laughing.

“That’s the word,” Sidney chimed in, making her parents laugh out loud.

“We pretty much expect we can handle anything, it’s just a matter of figuring it out,” said Janette Cullinan.

That includes an idea Cory Cullinan, a recording arts professor at CU Denver, came up with in mid-March.

“There is always light to be found in the dark days,” Cory Cullinan said. “I’ve found that’s the time you really realize what the light in your life is.”

Cory Cullinan said he has been writing music since he was a teenager.

He began right after he lost both his father and his only sibling in the same year.

As an adult, he has written and performed music through the moniker of Doctor Noize, with a mission of inspiring creativity, curiosity and character through music, art and words, according to his website.

It was through that, that Cory Cullinan wrote the 'Stay at Home song,' which he performed with his family.

“I came up with the idea [on a] Wednesday morning, wrote the song and recorded instruments Thursday,” said Cory Cullinan. “That night, I got my wife and the girls in the studio to get vocals, sent it a mastering professor Friday night and my daughter filmed the video the next day.”

The studio Cory Cullinan mentioned is in the family's home.

Sidney filmed and edited the video, which is currently posted on YouTube.

“It was pretty cool,” said Riley. “I mean, we’ve done stuff like this before. It’s different this time because this time it’s for a purpose. It was for the intention of making people feel like they can do stuff while being stuck at home. It’s another way to connect with people on a larger scale instead of being alone.”

“We’ve had an amazing response,” said Cory Cullinan. “The joy we felt from making it was received and it gave them joy too.”

Cory said the family might do a song every week just for fun.

They have already recorded the sequel to ‘Stay at Home,’ which, Cory said, will be released the week of April 6 after the mixing is done.

“We’re stuck in our house too,” said Cory Cullinan. “It makes us feel more connected. It’s great for everyone involved, including us.”