The 62-inch, 2,797-pound firework exploded nearly a mile above Steamboat Springs on Feb. 8. 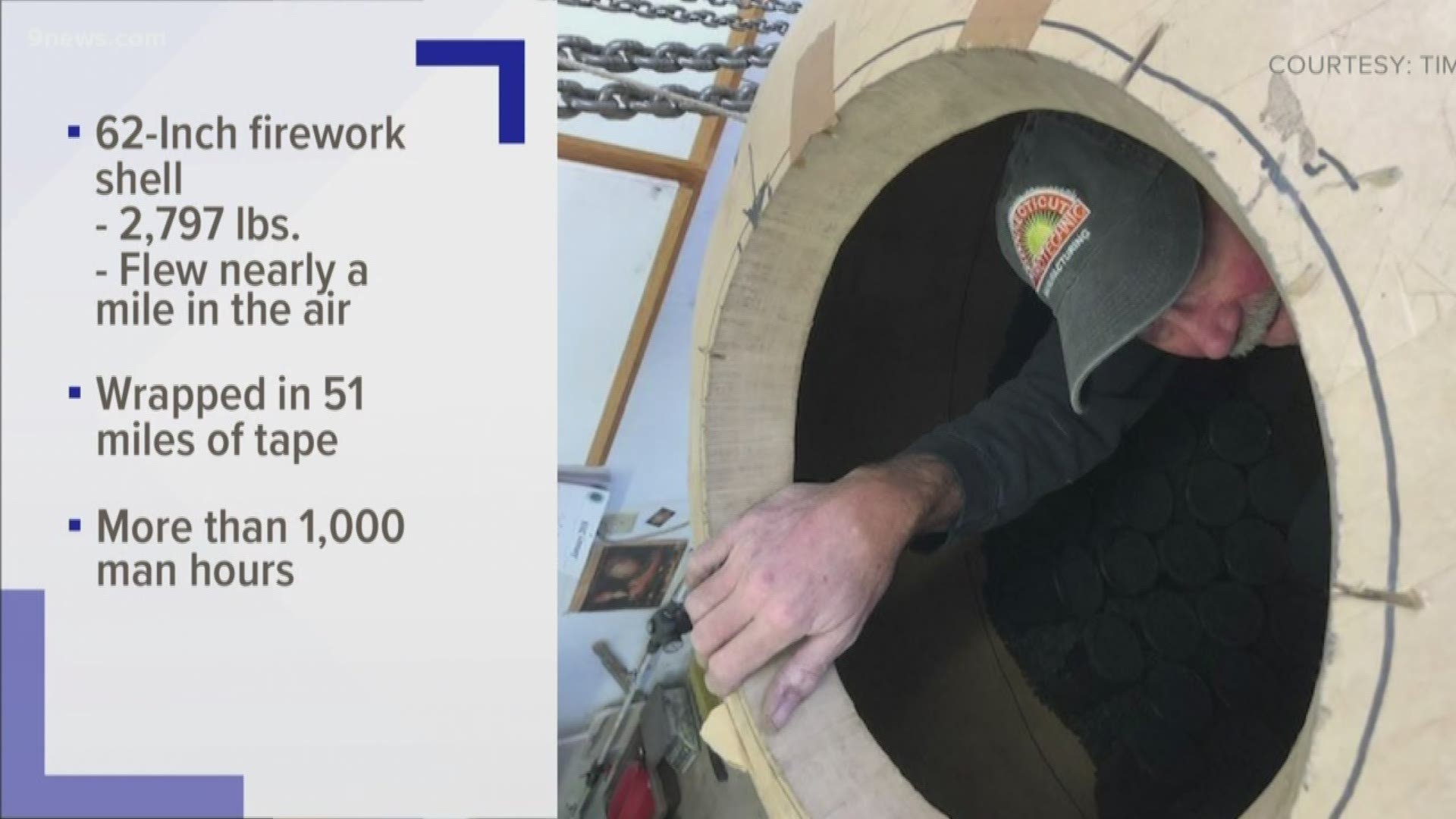 STEAMBOAT SPRINGS, Colo. — “We tried last year, and we failed,” said Tim Borden, project manager at Steamboat Fireworks and one of a four-man team behind the firework that set a world record in Steamboat Springs. “There was a lot more anxiety up there on the mountain that Saturday night.”

The 62-inch, 2,797-pound firework flew nearly a mile into the air before exploding into a bright, colorful and loud ball of light.

“Total relief,” Borden said of the moment the firework went up. “I made the statement ‘one small step for mankind, one giant leap for Steamboat Fireworks.' It’s just amazing when you think you can send 2,800 pounds 2,500 feet up in the air. It was quite a success for us.”

It’s a success borne from failure.

Borden and his team tried in February of 2019 to break the record, but it didn’t launch correctly.

“We had too sharp and too much lift,” Borden said of the explosive meant to send the firework out of the mortar and into the sky. “You know, it’s 26 feet underground.  We believed the shell thickness that housed the explosives was too thin. The result of both caused the firework to blow up inside the mortar.”

This time around, Borden said they thickened the shell by about two inches, making it almost eight inches thick with tape.

“That’s 51 miles of tape that we wrapped around that thing,” Borden said. “We changed the mix for the lift, the explosive that sent it up in the air and we modified it a bit, so it worked.”

The world record firework was launched from property owned and selected by the city of Steamboat Springs.

Once a venue was chosen, Borden’s team maximized the firework, meaning what was launched was the largest firework that could be fired off in that area without being over homes or people.

“We brought it over there in a crane truck,” Borden said.

Once at the mortar site, the firework shell was lowered 26 feet into the ground.

“That is a very difficult procedure because we can’t let the firework touch the mortar walls,” Borden said. “We only have about one-inch clearance on either side of that mortar.”

In the moments leading up to the launch, Borden said he was in constant contact with the city’s emergency services.

Within a few minutes of launch, police officers cleared the fallout area, a designated area where debris is meant to fall, by closing part of a public road and clearing people off the mountain.

“Everything came together,” Borden said. “I got the clearance from the fire department, within seconds, I launched the firework.”

A representative from Guinness World Records certified the world record.

“For us personally, we’re all firework fans and it’s an achievement,” said Borden. “I’m not of any illusion that no one is going to go after this record, but for us, it’ll always be an achievement within our hobby, so it’s really gratifying for all of us to share in this thing.”

If someone were to go after that record, Borden says they have the capability to respond, but that’s way down the road.

“We’re looking at smaller, unique shells with different effects,” Borden said of the near future. “We’re going to experiment with some exotic colors and some figures that we can put into these shells… and try to create some fireworks that you just wouldn’t see anywhere else that are personal to the Steamboat Springs crowd. Maybe someday, they’ll give us the moniker of Fireworks Town USA.”