Injured bear found after Cameron Peak fire weighed just 16 pounds, now it's back in the wild

When found in December the bear weighed just 16 pounds. When released earlier this month it was up to 93 pounds, CPW said. 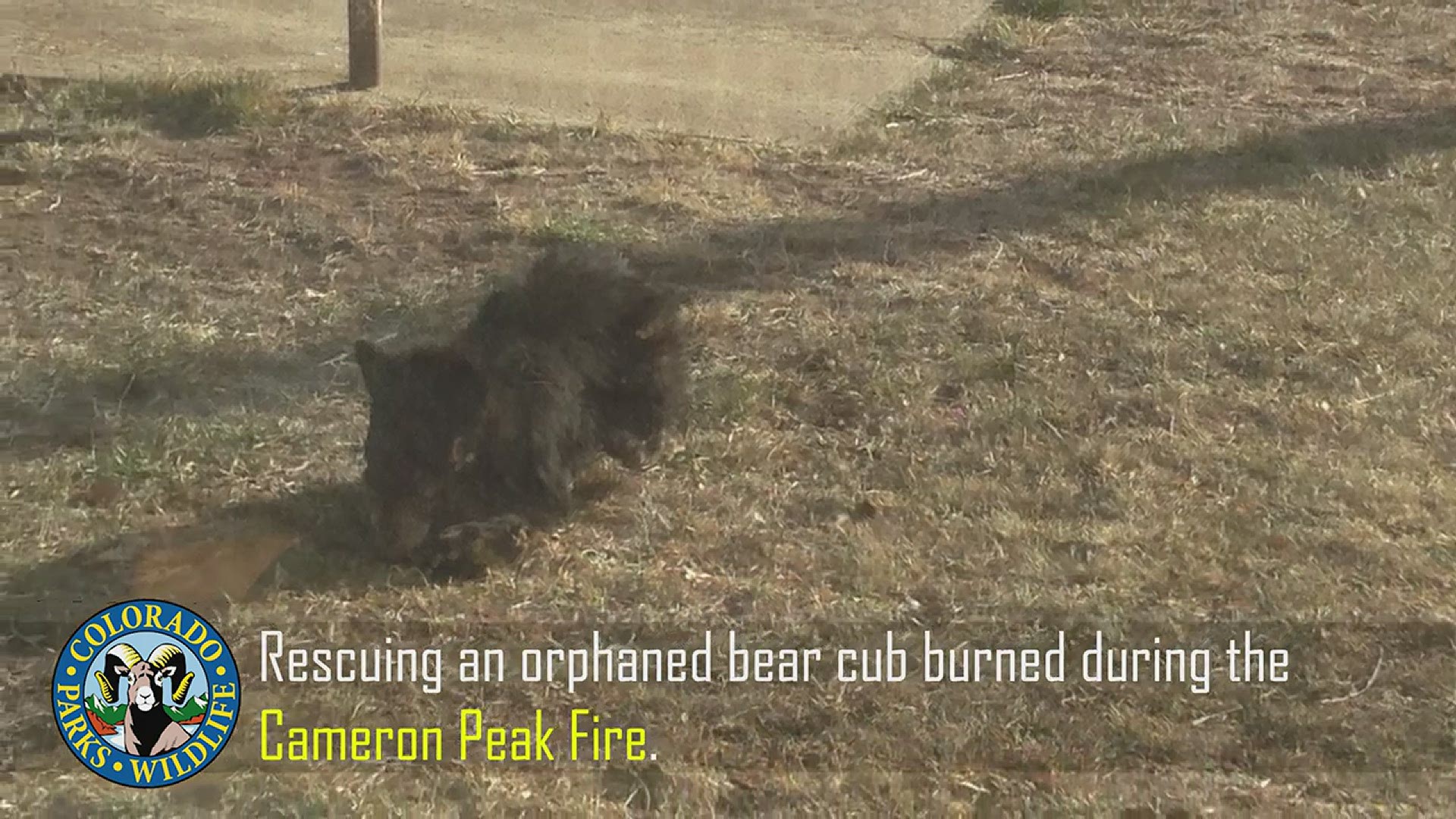 LARIMER COUNTY, Colo. — A yearling black bear cub that was injured during the Cameron Peak Fire in Larimer County last year and weighed just 16 pounds when he was found was nursed back to health over the last few months and finally released back into the wild, according to Colorado Parks and Wildlife (CPW).

“This bear's drive to survive did most of the work and we just gave it a little boost,” said Kristin Cannon, deputy regional manager for CPW's Northeast Region. “This bear went through an awful lot in its first year of life, let's hope humans can now help keep it wild by not rewarding it with our food sources and lowering its chances of survival.”

Landowners on Buckhorn Road northwest of Masonville first called CPW on Dec. 7 to report an injured bear cub seen on their parent’s porch. Wildlife officers responded that day but were unable to locate the cub.

Later that week, on Dec. 11, it was reported that the bear cub was once again sleeping on a porch on the same ranch. A wildlife officer successfully captured the cub that evening.

Credit: CPW
The bear cub getting a meal of mostly liquid on the night it was found severely malnourished and dehydrated.

Over a period of nearly five months, the bear was treated and rehabilitated, CPW said. The male cub was suffering from old burns on its feet sustained during the Cameron Peak Fire. Its ears were infected from frostbite, it was covered in cockleburs, was severely dehydrated, weak and starving, according to CPW

“This is an incredibly fortunate bear,” said CPW Area Wildlife Manager Jason Duetsch. “Most wild animals don’t survive the myriad of injuries they are exposed to, let alone be found, captured, and treated successfully. He definitely would not have made it through much longer. It is the smallest bear cub I have ever seen at that time of the year, which helped us make the decision to try rehabilitation.”

Once captured, the bear cub was brought up to CPW’s health lab in Fort Collins. There it was examined by veterinarians Dr. Pauline Nol, Dr. Karen Fox and Duetsch at the health lab, and despite being lethargic, officials believed it had a chance to survive.

“Since the foot injuries on this cub appeared to be healing well, and his other wounds were very treatable, we felt that with supportive care and nourishment his prognosis for recovery was very good,” Nol said.

Because the cub was weak and struggling to stay warm, they used heating pads, monitored its temperature, breathing and heart rate closely, and gave it supplemental oxygen while under sedation.

The cub fared well through the examination and sedation. The cockleburs were removed, its feet cleaned and bandaged, frostbitten ears treated, and fluids, pain medication and antibiotics were administered.

The cub had lost portions of both ears due to the frostbite, which is not an uncommon area to freeze if exposed. Wildlife officials suspect the orphaned cub didn’t have the wherewithal to find adequate shelter and had been exposed to the elements.

The Cameron Peak Fire - the largest wildfire in Colorado history - burned 208,913 acres in Larimer County from Aug. 13 when it started through Dec. 2 when containment finally reached 100%.

RELATED: These are the 9 biggest wildfires in Colorado history

The southeastern edge of that fire did travel all the way down to Buckhorn Road near Green Ridge, which was where this bear cub was found by landowners.

CPW officials and vet who cared for the bear couldn't determine when the cub was orphaned or when it was burned, but the new tissue growth on its feet when it was captured suggested that it had been quite some time.

“We could already see really nice healing because it had an amount of fresh tissue that granulated in,” said Michael Sirochman, manager of CPW’s Frisco Creek rehab facility in southwest Colorado, where the bear cub was rehabbed. “The most logical time is probably a month or more since it sustained the injuries to its feet.”

Credit: Jason Clay, CPW
A photo of the bear following its recovery just prior to its release.

Frisco Creek annually rehabilitates orphaned bear cubs with the goal of returning them to the wild while limiting interactions with humans at the facility. They typically come to Frisco Creek in the summer or early fall months and Sirochman strives to get a male bear up to 70 pounds by winter so that it can survive its first hibernation.

Given this bear cub weighed just over 16 pounds, Sirochman kept it awake all winter to allow it to eat and catch up to a normal body weight by springtime. That was a gradual progression, as the cub received a specialized diet starting with very easily digestible foods until he was able to get his digestive system back on track.

“I’m normally pretty optimistic when it comes to starvation with bears because they are a little different,” Sirochman said. “The nature of bears losing so much weight every year in winter torpor, they seem to be able to come back from that more easily than some other species. When the cub arrived at our facility it was feisty in the trap, and that bodes well to have that spunk still in it.”

Credit: CPW
The bear runs off into the wild after spending several months undergoing rehabiliation.

By the time the bear was ready to be released back into the wild, the now one-year-old weighed 93 pounds. It was released to a drainage area where officials believe it might have originally come from and has some suitable post-fire habitat.
SUGGESTED VIDEOS: Animals and Wildlife