A former humane dairy farm-turned sanctuary, houses 23 different animal species. There, they can live out the rest of their lives. 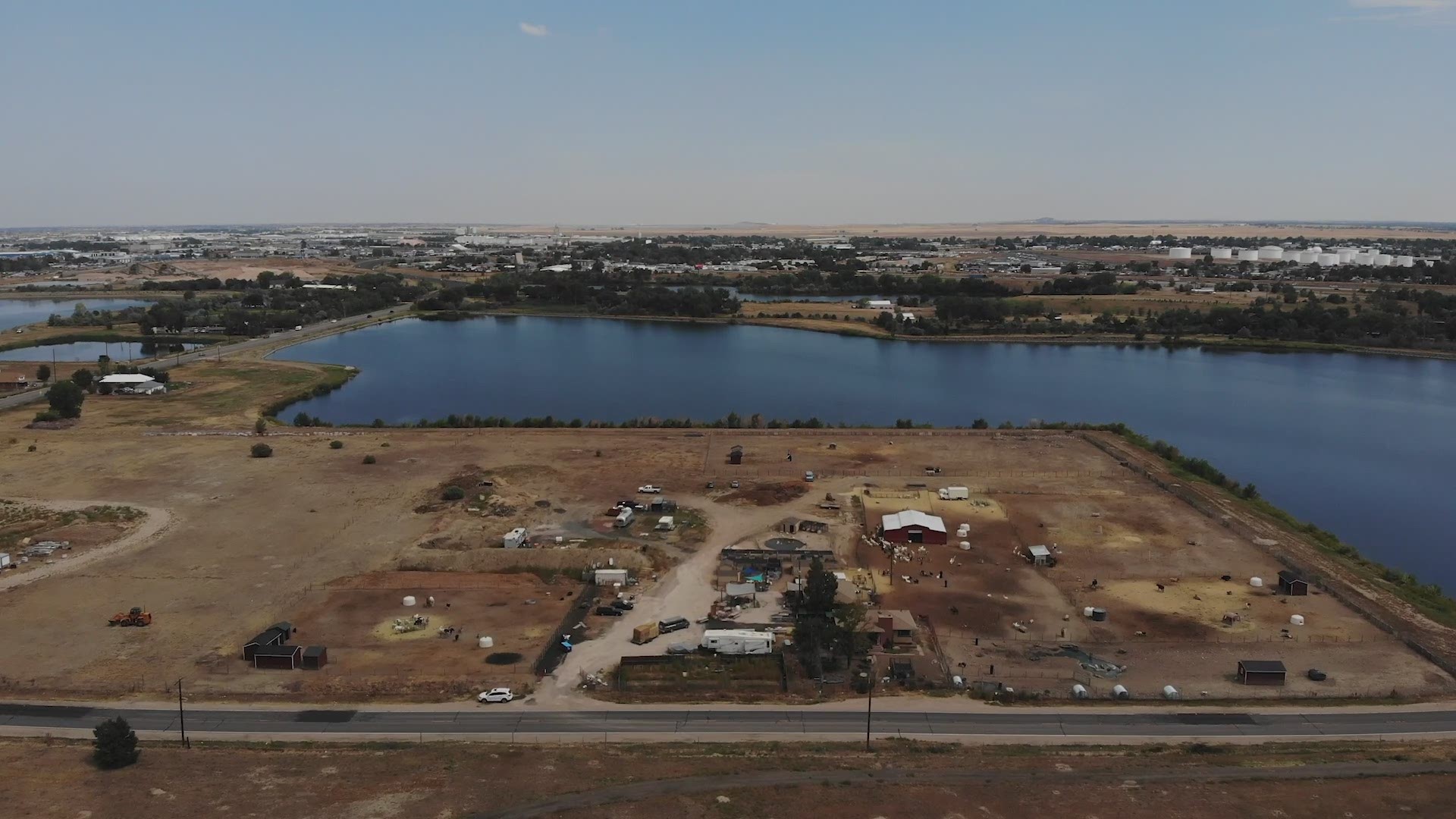 On a cool overcast Friday morning in September, Andrea Davis, director of Broken Shovels Farm Sanctuary, stood behind a white picnic table with her handy tablet to check in visitors for the sanctuary’s monthly First Friday Morning Tour. Davis stood out with her auburn hair and electric blue polka dot tank top and smiled as each guest approached her to enter the sanctuary. A young child’s curious face lit up when a group of clucking chickens confidently strode by with complete freedom to strut wherever they wanted to go.

Davis said she is doing exactly what she is meant to do.

“My heart is in rescue,” Davis said.

She said she wants to share her passion for rescue with the world and show people that these once slaughter-bound and neglected animals want nothing but love.

Davis said she knows that the animals, when together with people are “their own most powerful advocates.”

Davis started on her journey to forming Broken Shovels in 2009, but her devotion to animals started when she became a vegetarian at 15 years old. She contemplated how she could raise animals to provide food for herself, which as a vegetarian meant raising animals for eggs and milk only. The best solution Davis thought of to raise animals for food in the most humane way was to intern at small family-owned dairy farms to gain a better understanding on how they operated.

“In keeping animals, I really wanted to be responsible and know exactly what I was doing before I just jumped in all the way,” Davis said.

Fortunately for her, the perfect opportunity came to her when the library she had been working at closed for remodeling in 2009. Davis moved to both North Carolina and Hawaii to work various internships. She witnessed first-hand that there was a harsh reality behind dairy and egg farms.

“What I hadn’t expected to see was that there is a lot of animal slaughter that goes on in dairy farms — and especially egg farms,” Davis said. “Most people think it doesn’t kill a cow to milk the cow, it doesn’t kill a chicken to take the eggs, but the industry itself being profit-motivated only uses animals when they are young and productive.”

Davis explained that for a goat or cow to go into lactation, they must have recently given birth to a kid or calf. The mother, who is set to be used to produce milk, might be artificially inseminated. At birth, the newborn animal is taken away from its mother and sometimes the newborn may be discarded entirely, sent to slaughter for their meat or used later to produce milk.

Davis’s current rescue, Apollo, a Jersey calf, was taken in by Davis and her team after he was discarded from a dairy farm. This rejection meant being put up for auction and sold for just a few dollars to be used as a practice calf for rodeo roping, according to Broken Shovels Farm’s Instagram page. Apollo became sick with pneumonia and could not participate in rodeo roping any longer — as of June 13, 2019, a year after his rescue, Apollo is reported to be a healthy teenage-cow.

Before most of Davis’s rescue work began, she decided to establish her own slaughter-free humane dairy farm. This idea came to her after her time as an intern witnessing what some of the animals endured. She thought she could expose the industry of big and small dairy farms — while also providing customers with fresh dairy that came from happy animals.

In 2011, she returned to Denver from North Carolina with 24 birds and 16 goats who were on death row. She bought the property she currently resides, which is now known as Broken Shovels Farm Sanctuary, in 2012. 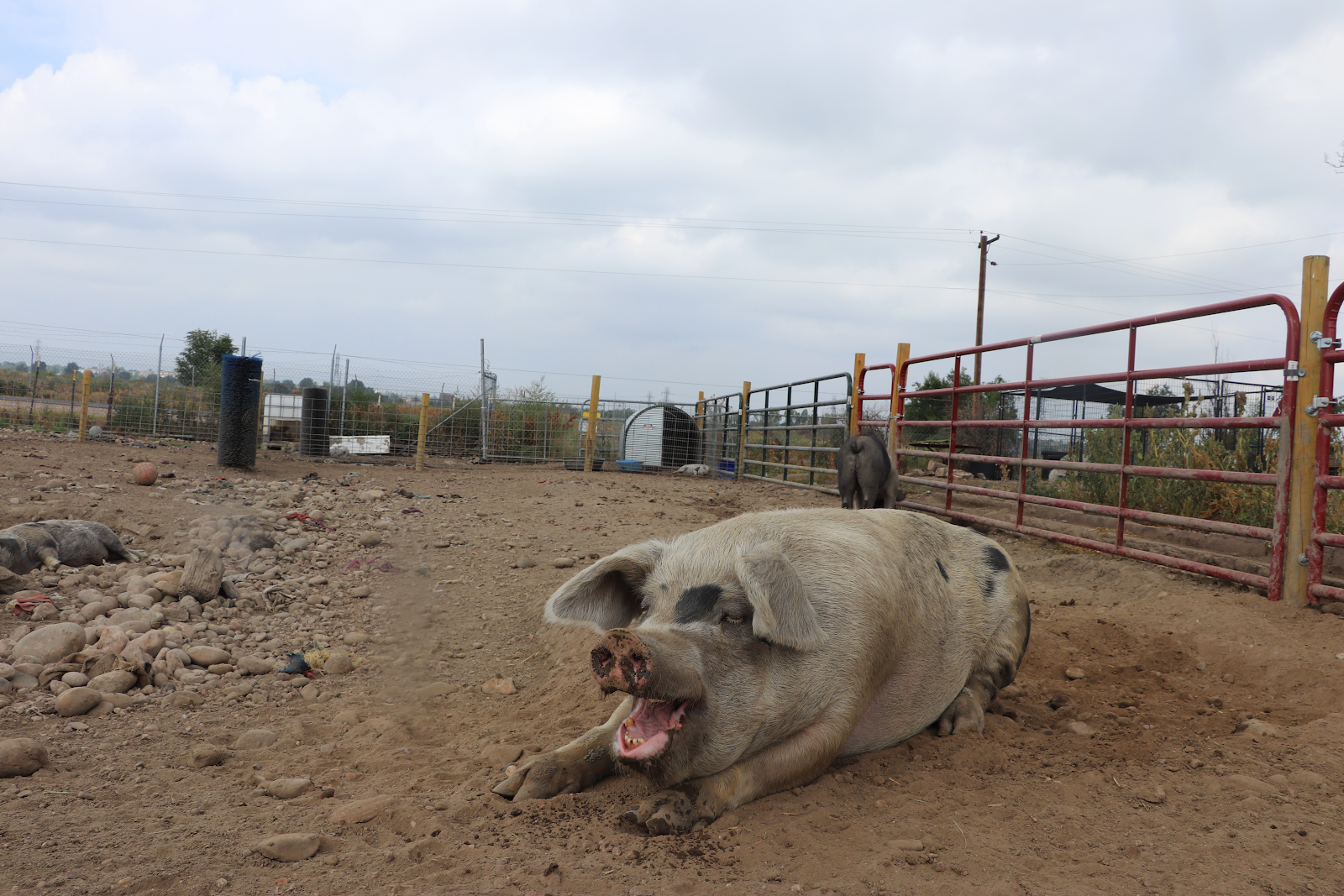 ‘It’s all been a learning process’

Davis educated people about industry dairy farming and soon expanded her farm. She began to take in all kinds of slaughter-bound farm animals, and Broken Shovels became more about rescuing animals than producing dairy.

“The feed bills were going up but the profits weren’t,” Davis said on why she changed Broken Shovels’ mission. She also said the dairy business did not align with her values, and pulling apart goat families to produce milk was no longer ethical to her. 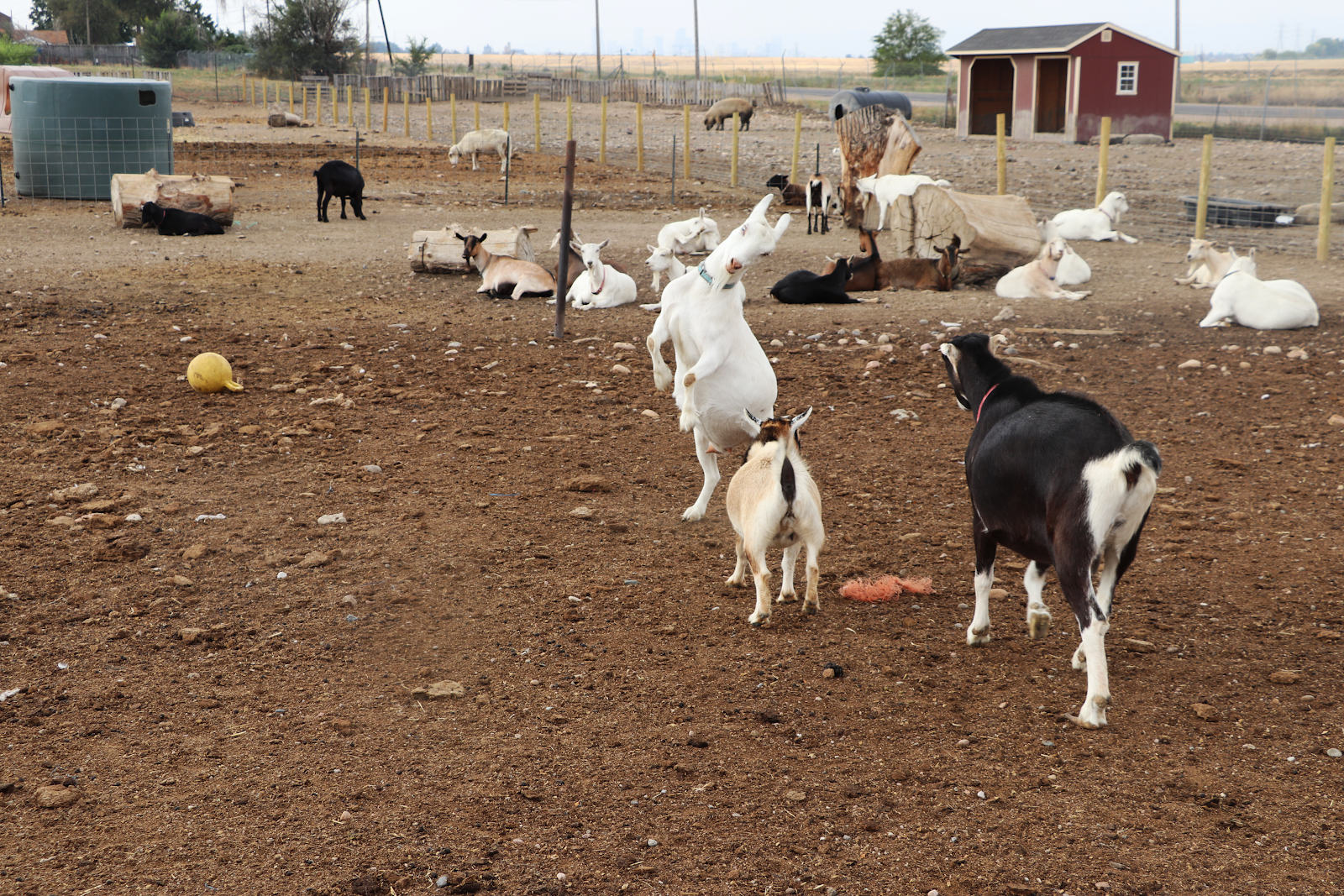 Goat jumping around in the main area of the sanctuary on Sept. 6. Photo by Sheridan Keith.

Davis closed the dairy in 2017 and concentrated exclusively on rescues. She also began practicing a vegan diet.

Along with rescuing slaughter-bound farm animals, before Davis knew it, she had a horse and water fowls, cats and dogs, llamas, sheep, miniature donkeys and more.

“Every time we take on another species, there are definitely considerations for different needs that have to be met,” she said. “[There are] different skills we have to have in caring for them — sometimes it’s different food, minerals. It’s all been a learning process.”

Davis said the animals also go through an adjustment period when a new animal is introduced. A newly introduced animal may be “hazed” before they are fully accepted. Farm animals are considered to be prey animals, according to Davis. When a new member is introduced, it’s imperative to the group that the new animal is not a weak member that will attract predators toward the herd. 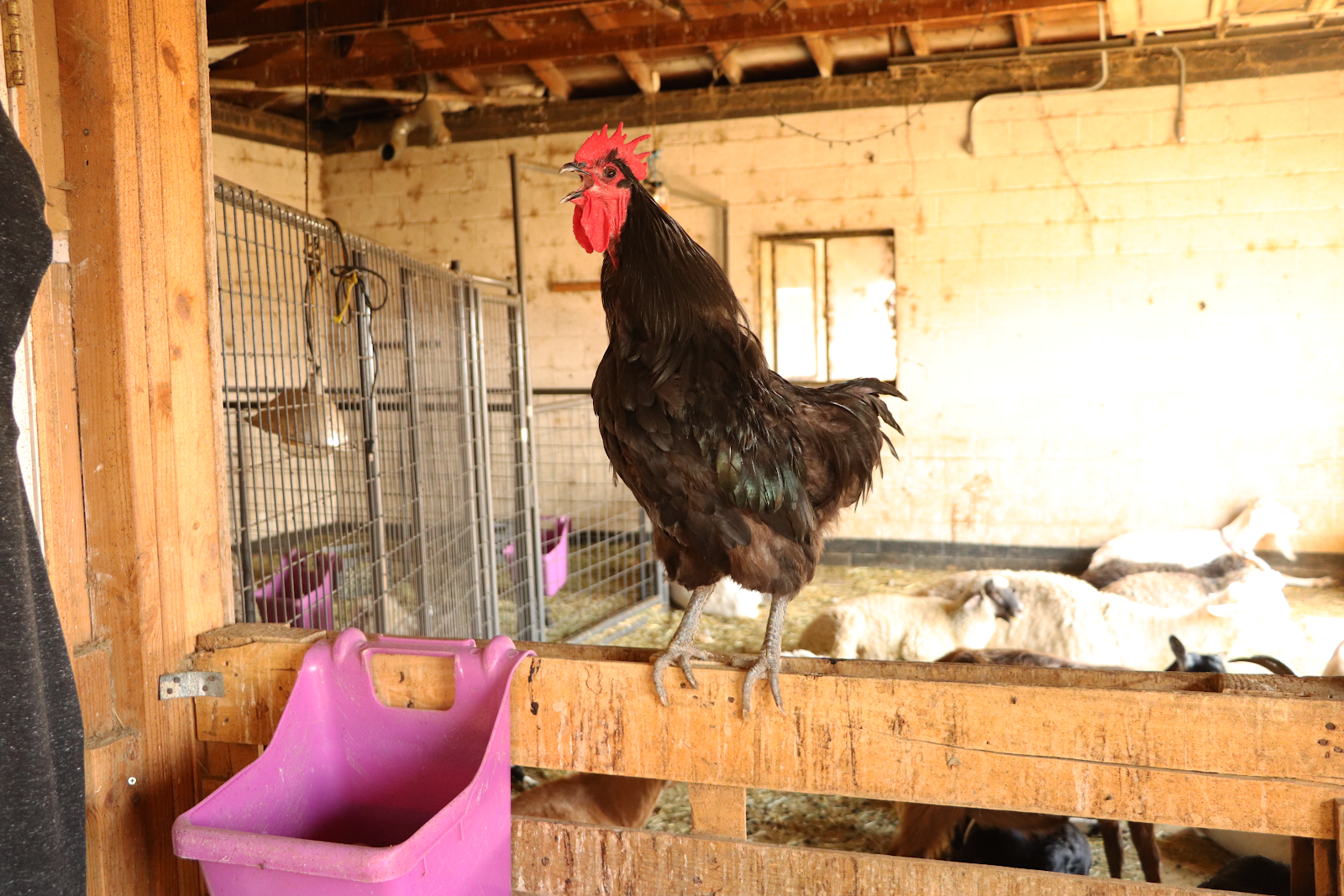 Rooster crowing in the barn at Broken Shovels on Sept. 6. Photo by Sheridan Keith.

“So few people have actually met the animals that are used for food in meaningful ways,” she said. “They might have seen them in petting zoos, through a fence, as exhibits at the state fair, in the process of being used — which is much different than coming to their home and seeing their true nature and behavior in a place where they are comfortable and well cared for and loved as individuals.”

Davis recalled some people she saw come in to the sanctuary who proudly wore barbecue shirts and made bacon jokes, who ended up leaving in tears. She told one story about a 60-year-old man who brought his family to the rescue with the impression it was a petting zoo, only to experience a tender moment with one of her cows, Maximus. Davis said he expressed that he had never met a cow before and, after this experience, could no longer eat beef.

“The big goal here is to bring joy,” Davis said. “Bring joy to the animals who live here, bring joy to humans who are here.”

(Editor's note: This story was part of a school project at Metro State University of Denver. Sabrina Laratta is a 9NEWS intern. Kenneth Bisio, professor; and students Sheridan Keith and Nathaniel Ortega also contributed to this story.)