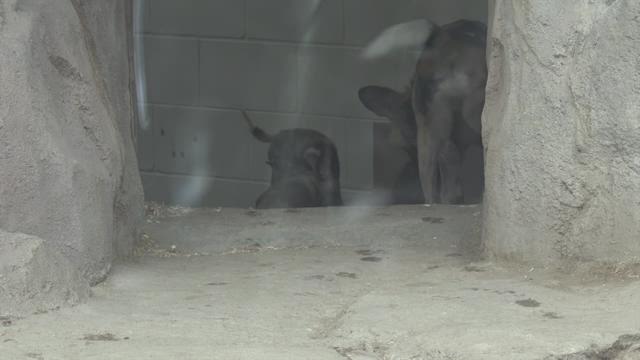 "Happy #PresidentsDay from our very own presidential pup: Theodore Roosevelt, African wild dog, named for a president who protected wildlife and was famous for his conservation work," the zoo said.

Theodore and his siblings Livingstone, Nigel and Cholula celebrated their second birthday in November, where zoo officials treated them to a 100-pound horse carcass.

"Our Theodore—quite the character, according to keepers—is caring and playful, and often the first to interact with new enrichment," the zoo said. "When his brother Nigel was first recovering from his leg amputation and wasn’t moving as quickly, Theodore would wait for him when they were shifting habitats within Benson’s Predator Ridge"

The quartet was born back on Nov. 20, 2017. The worldwide population of African wild dogs is estimated at just 6,600, according to the zoo. You can spot them in various habitats all over the Benson Predator Ridge, depending on the weather.

African wild dogs are native to the open woodlands and plains of sub-Saharan Africa. Full-grown adults weigh between 40 and 80 pounds and stand 30 inches tall at the shoulder.

"If you want to say hello on your next visit, look for the African wild dog with a notched ear and white band that goes across his entire neck," the zoo said.

The International Union for the Conservation of Nature puts them on the endangered list due to habitat destruction, human action and disease.

RELATED: Promptly fall in love with these African wild dog pups at the Denver Zoo