The buck was wearing an orange dog collar. He was put down following the attack. 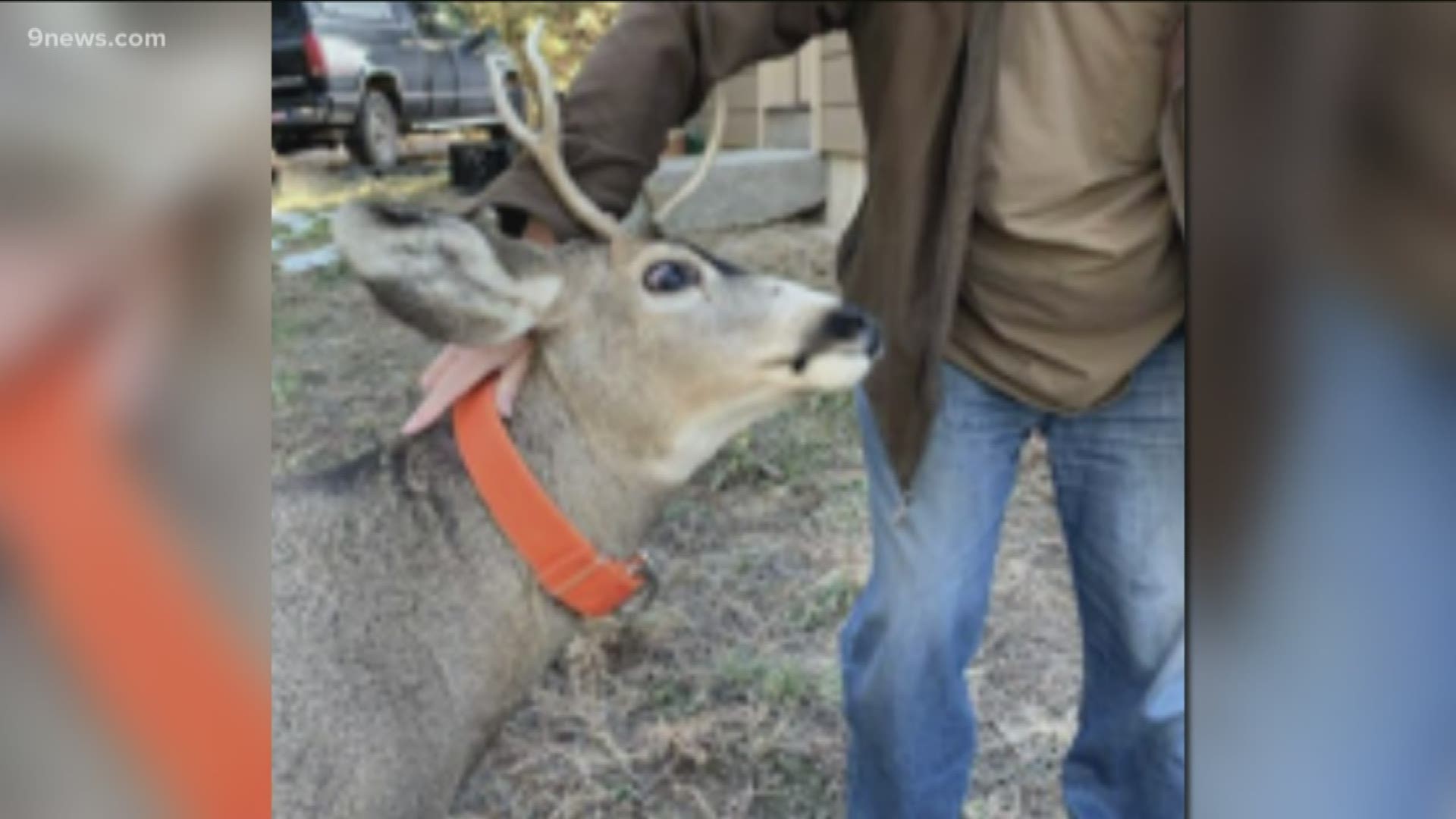 A domesticated deer that was wearing a bright orange dog collar gored a man in Franktown and was later put down by a Douglas County deputy, according to Colorado Parks and Wildlife (CPW).

The 56-year-old victim, Jordan Winn, and his wife told CPW officers they saw the “friendly deer” on the other side of their fence around 4:50 p.m. Wednesday.

Winn's wife, Janica, reached over the fence and the deer approached her and touched her finger with its nose, then the buck came through a break in the fence line, CPW said.

It then approached Janica Winn and knocked her back, pinning her into the barb-wire fence, according to CPW. Her husband tried to intervene and the deer attacked, knocking him to the ground and dragging him around the yard, CPW said. He sustained wounds to his lower body from the buck's antlers.

"He knocked me on the ground and we wrestled for about five minutes or so," Jordan Winn said. "It seemed like an hour at one point. I got him by the collar and the antler and I shoved his nose into the ground."

During the attack, Janica Winn ran inside and called for help. She also shot a pellet gun toward the buck, which distracted it long enough for her husband to get to safety, according to CPW.

Jordan Winn was taken to the hospital and released the same night.

"I get into the paramedics' ambulance and they're like, 'How you feel,'" Jordan Winn said. "And I'm like, 'I feel like I just won the Super bowl. My heart's racing a million miles an hour. I'm really hyped up.'"

The deer was put down by a Douglas County Sheriff’s Office deputy who responded to the couple's 911, CPW said.

RELATED: Misguided, but not illegal: Woman won't be cited after putting bobcat in her SUV

CPW said the deer was sent to a lab to be tested for rabies and chronic wasting disease.

Wildlife officers believe the buck was about 2 years old and was domesticated and set-free in the area recently.

“Every indication we see points to this deer being raised by people, one from its collar and two from its behavior,” said Wildlife Officer Casey Westbrook. “We suspect somebody was raising it and released it after they couldn’t handle it anymore."

Prior to Wednesday, CPW had no previous reports of a collared deer in the area. About two hours before Jordan Winn was attacked, a different resident contacted CPW with concerns about a picture on Facebook that showed a man interacting with the deer on Saturday.

Wildlife officers contacted the man in the Facebook post. He said the buck had approached him on Saturday while he was doing yard work at his home in Elizabeth. The man stated the deer had attempted to push him around with its antlers and showed the officers several pictures of him fending off the animal.

Just a few minutes before Jordan Winn was attacked Wednesday, CPW received another report that the same deer had chased a 10-year-old boy near Tomichi Drive and Caribou Drive in Franktown. CPW said a man pulled his car in between the child and the deer to prevent an attack. That incident happened just down the road from where Jordan WInn was gored.

“If this was reported to CPW on Saturday instead of being posted on Facebook, we might have been able to prevent this,” Westbrook said. “The behavior of any wild animal can be unpredictable, and the behavior of wildlife that get domesticated can be demanding and aggressive.”

It is illegal to own or possess wildlife in Colorado. If anyone has information about people raising or attempting to domesticate wildlife, it should be reported to CPW by calling 303-291-7227. It can also be done anonymously through Operation Game Thief at 1-877-265-6648 or sending an email to game.thief@state.co.us.