The group wants to sell the water to Denver-area developments. The area is home to thousands of sandhill cranes. 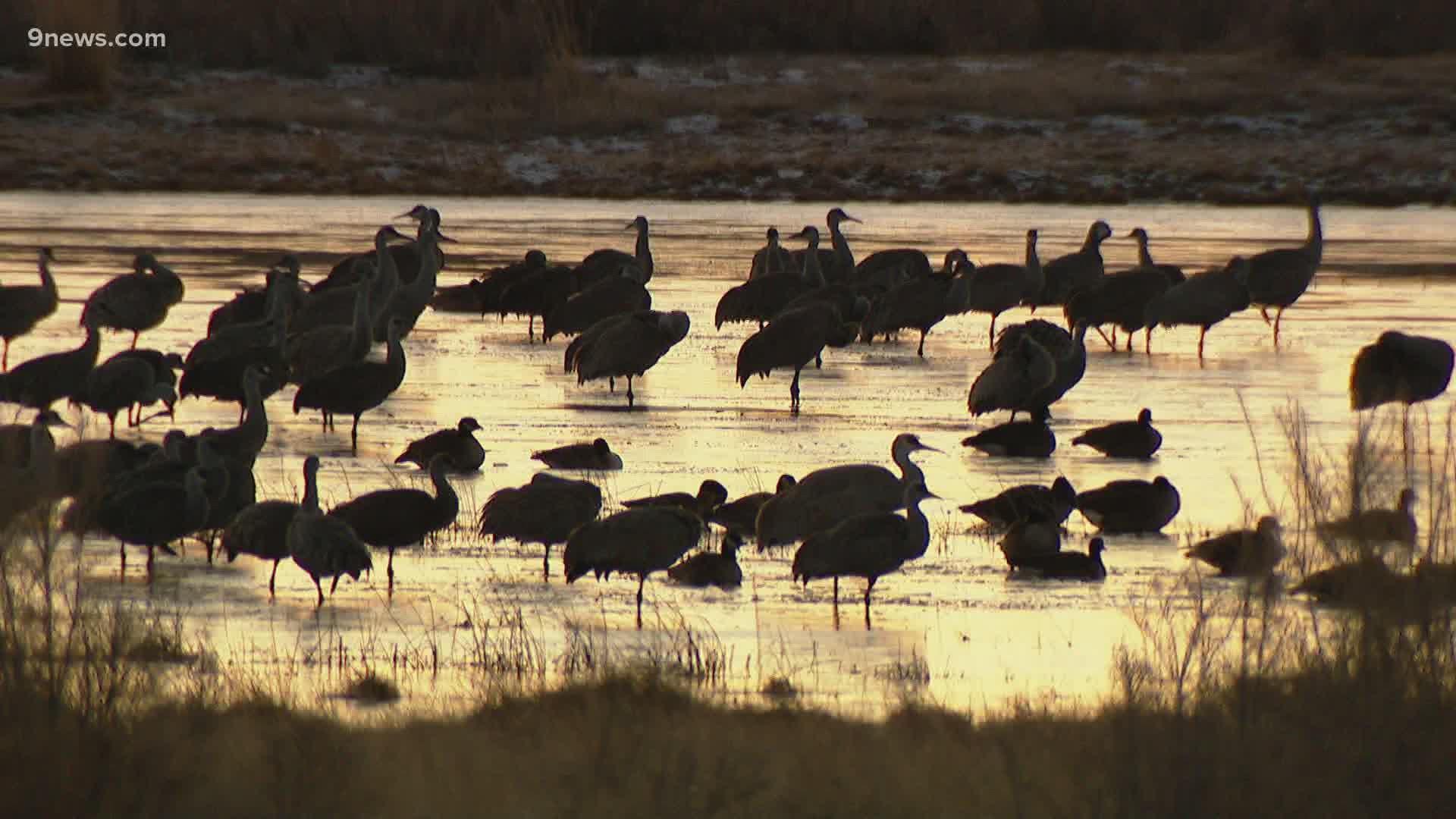 “Every spring when you hear that sound — that sound is just so incredibly haunting,” said retired wildlife biologist Deb Callahan. “It’s always a thrill.”

When the sun is just peeking over the Sangre de Christo mountains, thousands of sandhill cranes begin walking, often heard before they are seen. Some 25,000 birds have been counted here in recent years.

“You kind of know the grip of winter is done when you hear the cranes,” said Jenny Nehring,  a partner and biologist at Wetland Dynamics.

Both Nehring and Callahan love living in the valley, where they have plenty to look at through the binoculars that are always hanging around their necks.

“A lot of people think of it as a wasteland, but when you learn about the unique habitat it is, and the wildlife it supports, it’s just a fascinating ecosystem,” Nehring said. “But it used to be a whole lot wetter than it is now because our aquifer is dropping.”

The water in the area has for years kept the cranes happy. They sleep in wetlands, and that’s part of why the valley was so appealing to them when they started migrating there thousands of years ago. The ground and surface water also kept farmers happy. When the area became an agricultural spot, farmers and ranchers secured their water rights and made a living. The cranes didn’t mind that either, now stopping over for both the grain farmers grew and the wetlands.

Nehring said irrigation coupled with drought is a problem, and the water levels in the underground aquifer are low. She said there are proposals that would export water out of the valley that endanger the supply even more — and that would hurt agriculture and the landscape and wildlife.

“You start the export, and you’re not really sure where it might end,” Nehring said. “The aquifer supports us, and you pull the bottom out of that, and it could just crumble potentially.”

The group Renewable Water Resources is proposing to buy water rights from farmers and ranchers in the area. They’d then sell that water to developments on the front range.

In a statement, they wrote, “Our project and location do not impact the sandhill cranes, as our project is not located in the crane habitat. Additionally, because the water will come from 2,000 feet below ground, there will be no adverse impacts on wildlife or vegetation.”

Nehring said she doesn't believe any water should leave the valley. Neither does Cleave Simpson, a fourth-generation farmer and rancher in the valley, and the new Republican State Senator for Colorado Senate District 35.

“The pressure around rural Colorado, particularly around water, was a real motivating factor to me," Simpson said of why he initially ran for office. “I certainly didn’t envision myself standing here in front of the capitol in this capacity.”

Simpson said this is nothing new for his constituents. As the general manager of the Rio Grande Water Conservation District in the San Luis Valley, he said he knows about water issues and the fights that are often waged.

“About every decade, there’s another effort or proposal to export water out of the basin, [and it's] almost exclusively about drilling wells into our aquifer system and pumping water out,” Simpson said. “Every time this comes up, the stakeholders in the community [have] come together, risen up and said, ‘We’ll challenge this.’”

He said he is opposed to the newest proposal as well. He knows that some farmers and ranchers might be tempted to take the money Renewable Water Resources offers because of need, though he won’t be selling his water rights.

“The best way to do this is to support agriculture so they don’t have to succumb to financial pressures that come with exporting water,” Simpson said.

Nehring has another solution that she said she thinks might help put a dent in the problem.

“What can Denver and the Front Range do?” Nehring asked. “They can know where their water comes from, but they can also be very careful with their water use — Kentucky Bluegrass, probably ought to be in Kentucky.”

Nehring and Callahan said that this recent proposal of exporting 22,000 acres of water might not impact the landscape now, but they worry about the future and if this opens up the possibility of more export.

Callahan, who plans the area’s annual crane festival with Nehring, said the cranes helped lure her to the valley. She said it wouldn’t be the same without them.

“Spring would feel kind of empty and just so different,” Callahan said.

The cranes only spend about 8 weeks in the valley, and when it’s time to go, the skies are quiet again. The friends said they hope that the valley isn’t never completely silent.

“They’re such an iconic, charismatic bird,” Nehring said. “Nobody hates the cranes. Everybody likes the cranes.”

RELATED: Denver Zoo's lions played in the snow like dogs, and there's a video to prove it