When the smallest debt is paid in full, the money that had been going to pay it down is rolled into the next smallest balance. 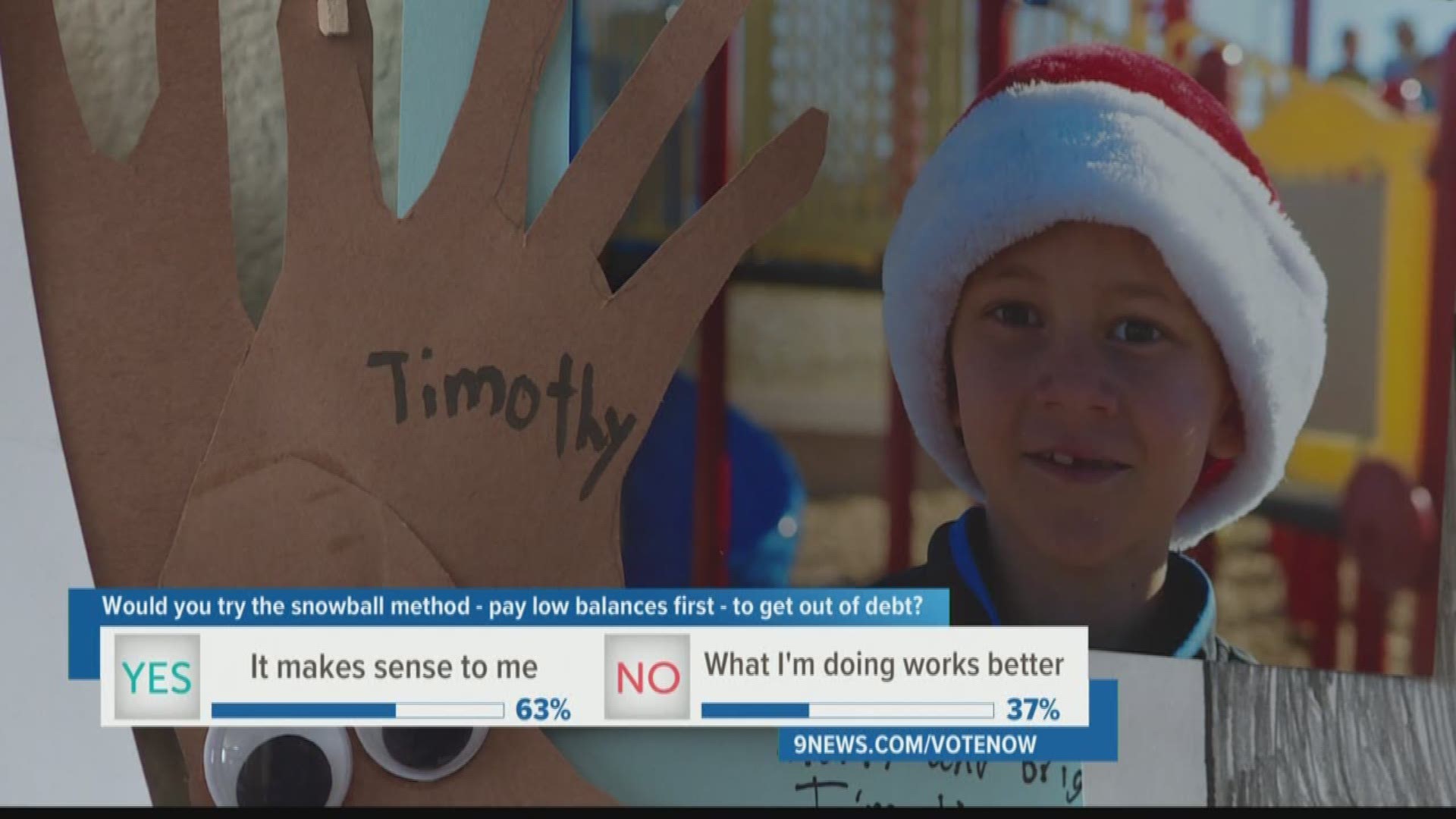 HIGHLANDS RANCH – Despite a few expensive life changes, a couple in Highlands Ranch has managed to rid themselves of $55,000 in debt over four years using what’s known as the debt snowball method.

Author, financial broadcaster and motivational speaker Dave Ramsey pioneered the method where debtors pay off balances in order of smallest to largest, gaining momentum as each account is paid off.

When the smallest debt is paid in full, the money that had been going to pay it down is rolled into the next smallest balance.

“It started when we just, we were basically maxed out on all of our credit cards and couldn’t get more,” Angie Cheline said. “And we discovered Dave Ramsey.”

Cheline, a mom of three young boys, said she and her husband Chris had just gradually made a lot of little financial mistakes.

“Instead of waiting a few months to buy something, we’d put it on the credit card,” she said. “A couple of very dumb car loans – just much higher and more than we needed – when we could have saved up and got a car that we could’ve had, you know, owned free and clear.”

She said they weren’t paying attention to where their money was going, and then it got out of control. That’s until a relative mentioned Dave Ramsey. They began to listen to Ramsey’s shows and podcasts, and began to follow Ramsey’s ‘baby steps’ for getting out of debt and building wealth.

“The first step is to save $1,000 just in case emergencies come up because they’re going to,” Cheline said. “And then once we did that, we listed our debts and just started going through one at a time.”

They were making a budget every month and making sure all the bills were paid first. Everything else, they used to pay off debt.

They used only cash and closed all of their credit card accounts.

That meant there was only so much cash for every expense, including trips to the grocery store and gas station.

“That was one of the biggest things – just switching that mindset,” Cheline said. “We were a lot more aware of what we were actually spending. It’s not just handing over a piece of plastic.”

They were also very intentional about doing a budget every month and working out exactly where every dollar was going.

“We quit eating out altogether,” Cheline said. “Unless we had a gift card, we didn’t eat out. Everything goes to our daily needs and paying off our debt.”

A few years into their debt snowball, Chris lost his job and was out of work for nine months.

The couple also welcomed the birth of their third child. They were able to pay for both with their savings.

“We had the budget, and we knew what we were paying every month,” Cheline said. “We had enough saved up that we didn’t have to go back further into debt during that time.”

Cheline described the moment they paid off their last non-mortgage debt as surreal.

“It was really exciting,” she said. “We had all of our boys with us when we did it. We all sat there around the computer to make that final payment. We aren’t slaves to anybody else anymore.”

After that last payment, the Chelines drove to Nashville to meet Dave Ramsey and do their debt-free scream, a regular feature of Ramsey’s broadcasts.

Cheline said she still uses cash most of the time and will never use credit cards again. She also said the money-saving habits are rubbing off on their kids. Those kids are now able to participate in extracurricular activities such as sports and theater.