The first official Indigenous People’s Day in Denver drew hundreds of people to the steps of the Capitol Saturday, just hours after the annual Columbus Day parade passed through. 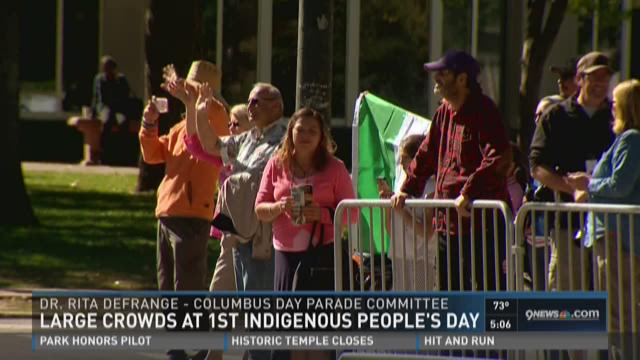 DENVER – The first official Indigenous Peoples' Day in Denver drew hundreds of people to the steps of the Capitol Saturday, just hours after the annual Columbus Day parade passed through.

The parade route was shorter this year, and organizers admitted the crowds were smaller.

“We’re a little light on turnout, but we’ve got a lot of dedicated folks who are here,” said Dr. Rita DeFrange, president of the Columbus Day Parade Committee and historian for the Sons of Italy.

1 / 19
The first official Indigenous People’s Day and the Columbus Day parade were celebrated in Denver Saturday.

Denver has celebrated Columbus Day for more than a century, although it hasn’t been without controversy or protest.

“In the past, we’ve protested their parade, just anything to prevent the parade from happening,” said Tessa McLean, member of the American Indian Movement of Colorado.

McLean applauded the decision made by the Denver City Council Monday night to approve the creation of an official Indigenous People’s Day to be observed on the second Monday of October each year.

“That’s great. It’s a great foundation. It’s something positive to celebrate for our people and it’s not just for us, but everyone who shares this land with us,” she said.

On Saturday afternoon, McLean led one of four, large groups of American Indians and others that converged on the steps of the Capitol. The celebration included singing, drumming, dancing and several speeches. Many wore traditional ceremonial clothing.

“It’s just one day where people can think about the original people of this land and how many of us were murdered and massacred, but we’re still here,” Mclean said.

McLean and many in the crowd at the Capitol wanted to see Columbus Day abolished.

“There’s a lot of negativity that surrounds him, but we are a evaluating a man that is 500 years old by today’s standards and we can’t do that,” she said.

The debate will go on, so long as two celebrations continue in Denver.