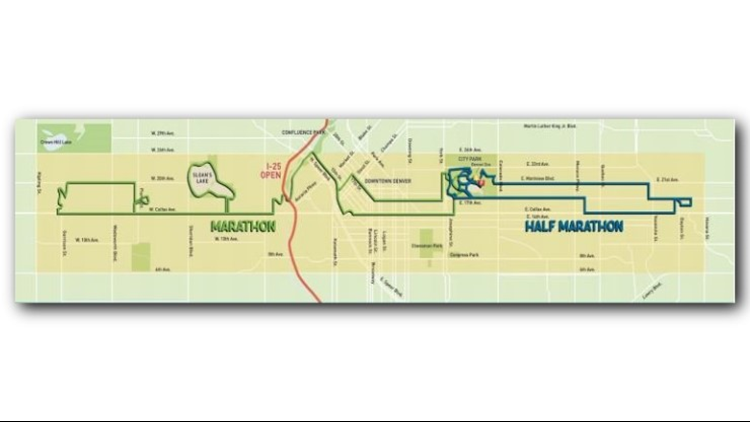 KUSA — Don’t say we didn’t warn you: the Colfax Marathon and its other races are this weekend, and that means there will be road closures and light rail service disruptions as thousands of runners take to the streets of Denver, Lakewood and Aurora.

Drivers looking to avoid delays should avoid the yellow area shaded in the map below from 5:30 a.m. to noon on Sunday if they can:

With that being said, expected full and partial closures of westbound and eastbound Colfax Avenue from Aurora to Lakewood from 3 a.m. to 1 p.m. Sunday.

We’ll have a full list of all the closures for the full and half marathons below. But, it’s also worth mentioning that dozens of bus routes and the D, F and H light rail lines will also be detoured or delayed from 3 a.m. to 2 p.m. No bus shuttles will be provided, RTD said.

Good luck to all the runners! Here’s a full recap of the closures from the Colfax Marathon:

- Westbound Colfax Avenue will be closed from Havana Street to Yosemite Street at 5:40 a.m.

- East 17th Avenue will be closed to all eastbound traffic from Colorado Blvd to Yosemite Street at 7 a.m. until 11 a.m.

- East 16th Avenue will be closed to all east and westbound traffic from Havana Street to Chester Street at 6 a.m.

- Yosemite Street will be closed to all north and southbound traffic from Montview Ave. to Colfax Ave from 6 a.m. to 10 a.m.

- Westbound Colfax will be closed from 4 a.m. to 9 a.m. from Esplanade to Speer.

- Colorado Blvd between Colfax Avenue and East 23rd Avenue will be closed from 5 a.m. to noon.

- Southbound off-ramp to I-25 at Colfax Avenue will be closed until noon.

- Speer Boulevard at Colfax Avenue in both directions will have very long delays from 6 a.m. to 11 a.m.

- The only places to cross Colfax Avenue will be at I-25 or Federal Boulevard.

- Seventeenth Street will be open as the runners will be in the far north lanes only. Some cross traffic and turns will be limited.

- The last runner will cross westbound Colfax Avenue at Speer Boulevard at approximately 7:30 a.m. and the road will open shortly after.

- The last runner will leave Raleigh and Colfax (they will go north and south on Raleigh to Sloan’s Lake, encircling it) at approximately 8:45 a.m.

- The last marathon runners will pass through downtown at 11:15 a.m.

- North to south streets that cross Colfax from Sheridan Boulevard to Garrison Street will be closed to through traffic from 6 a.m. to 10 a.m.

- To move traffic north and south through the area, motorists will be funneled on detour routes to Interstate 70 and Federal Boulevard, using West Sixth, West 26th and West 32nd Avenues.

- Traffic traveling east on W. Colfax will be diverted south on Garrison Street, then continue east on W. 14th Ave.

- Traffic will be allowed to proceed westbound on Colfax from Garrison.

- Traffic will be allowed limited access to local only traffic across W. 20th Avenue at signaled intersections, expect delays.

- Local traffic and marathon spectators will be permitted access.

- Access to Colfax businesses open on May 20th will be allowed from side streets either through limited-access lanes on Colfax Avenue marked with cones or through police escorts.

- Access to and from residences and churches adjacent to Colfax Avenue will be allowed through the use of side streets.

- The last runner will be off of Colfax Avenue in Lakewood at approximately 10:30 a.m.

- Colfax Avenue will be cleaned and swept immediately following the passage of runners.