It was the year 1884, and Leadville barber John F. Fitzgerald made the journey to Denver's Holladay Street looking for a good time, though he told his wife he had come to the Mile High City to visit a friend.

The Rocky Mountain News headline at the time about the grisly murder of John H. Fitzgerald, a barber from Leadville who disappeared after a light of gambling and prostitutes on a rough-and-tumble Denver street.
Author: Allison Sylte (KUSA)
Published: 10/26/2015 2:20:28 PM

DENVER – It was the year 1884, and Leadville barber John F. Fitzgerald made the journey to Denver's Holladay Street looking for a good time, though he told his wife he had come to the Mile High City to visit a friend. 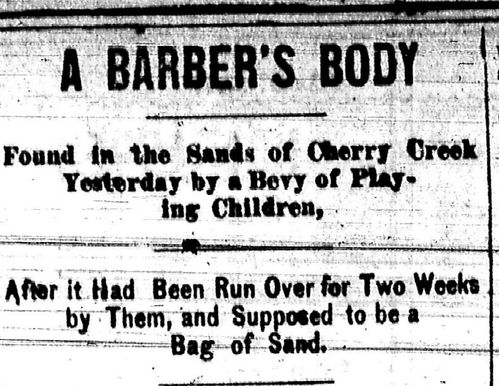 This was a place where "a virtuous woman or an honest man was looked on with vast suspicion," the Rocky Mountain News reported. And it was the place where, after a night of gambling and prostitutes, Fitzgerald was last seen.

That is until two months later, when three boys playing in Cherry Creek saw his pale, decomposing hand emerge from the mud; his lifeless body was so buried in the sand that it took a crew armed with spades to dig him out. The spectacle occurred in front of a curious crowd that swelled to 1,000, the Rocky Mountain News reported at the time.

"The body was badly decomposed, and it was almost impossible to remove the clothing," that 1884 news report read. "The clothing was good, and the underclothes were of fine character. It had on a heavy overcoat, heavy woolen socks and a pair of new shoes."

He also had his tools as a barber. Inscribed on them was his name: "John H. Fitzgerald." He also had a pocketbook of "sentimental poetry."

Fitzgerald's death would baffle local authorities -- that is, until they learned what transpired on March 20, 1884 during the barber's first and last night in Denver.

The tale would begin when he entered the gambling establishment of "one Georgie Lyons," the Rocky Mountain News reported in 1948. While here, he flashed a "respectable roll" of money – a seemingly insignificant action that would seal his fate on those hard-scrabble streets.

Police later learned that Fitzgerald had gone to Belle Worden's "house of prostitution." Neighbors told investigators they heard cries of "Murder!" the last time Fitzgerald had been seen.

"… but then, there were similar cries almost every night from some place, and they didn't really mean anything," the Rocky Mountain News wrote.

Though cries of "murder" may not have been cause for alarm in 1884 Denver, this tip was enough for police to act. They raided Belle Worden's house in June, arresting everyone they found – including Belle herself, Mattie Lemon and Berry Gates – who the newspaper said was Mattie's "handyman, hatchetman and… spare-time lover."

Two days later, police arrested Charles Smith, a driver who authorities said had confessed on behalf of all four. Smith is believed to have enticed Fitzgerald to the house, and told Belle about the roll of bills the Leadville barber had in his possession.

After entertaining Fitzgerald for a brief period of time, the Rocky Mountain News says he retired with Mattie to her room. When he fell asleep, "she banded a blanket, Belle picked up a basin, Gates took a knife from his pocket."

Gates is believed to have "expertly" cut Fitzgerald's throat, while the women held him down – clutching a basin so they didn't soil their clothes. And the roll that they sought? It was a mere $115. They also took a gold watch.

The next night, they dumped his body in Cherry Creek.

A barber who dropped by Belle's house the day after Fitzgerald was found testified that Belle had "leaped out of her chair, crying 'Who was found?'" when he mentioned the body. The Rocky Mountain News said when the barber told her it was Fitzgerald, she fainted.

Though none of the four confessed during the trial, a jury promptly found them guilty of murder. During sentencing, they asked the judge for clemency, claiming innocence – and it's something the Rocky Mountain News said they got.

Each of them was sentenced to only 10 years behind bars for the grisly murder.

While leaving the courthouse, they were heard talking about what jobs they wanted during their time in prison.

To this day, it is rumored the ghost of Mr. Fitzgerald haunts Union Station.

Information in the article was gathered from History Colorado and the Denver Public Library. Have an idea for something we should research? Email us!

Easy and creepy Halloween snacks you can make at home