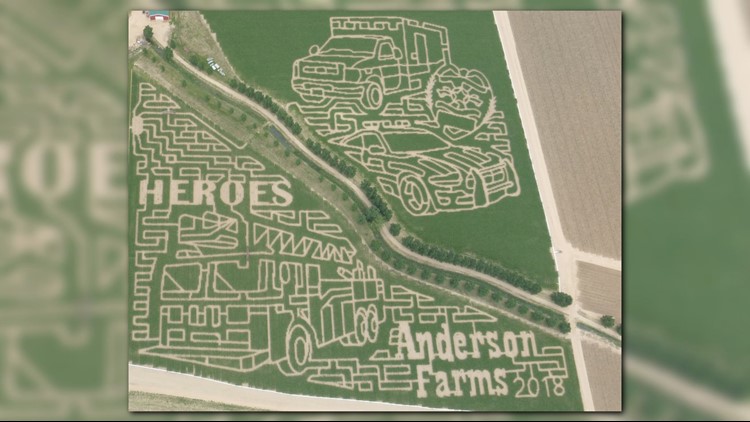 Anderson Farms has been creating a unique corn maze design every year since 1999.

This year, the design includes firetrucks, police cars, ambulances and a badge -- all meant to honor first responders.

That's according to Rachelle Wegele, operations manager for Anderson Farms, a farm attraction in Erie that includes an 8-mile corn maze (which becomes haunted at night), a pumpkin patch, pavilions, camping fires and more.

"The idea came from one of our managers after Colorado first responders had experienced a difficult first few months," Wegele said. "We wanted to honor those who risk their lives every day for us past and present."

Creating the maze for the festival is a long process. MazePlay, an Idaho-based corn maze designer creates the design in the spring and cuts it into the Anderson Farms' corn field in early June.

"Our corn is about 6 inches tall when they drive a small tractor with a tiller on the back through the field," Wegele said. "They have a GPS unit in the tractor cab that tells the driver where to go."

Anderson Farm workers then make ditch rows for irrigation and add the bridges and checkpoints right after the maze is cut.

Corn then grows over the summer, and Anderson Farms staff in early September go back through the field with a small tractor to retill the paths and make them flat again -- a process that takes about a week, Wegele said.

Wegele said the maze is a family-friendly activity.

"We have four different sections to the maze with varying difficulty," she said.

One section, for example, is a third of a mile-long and has a game designed for 2-year-olds and 8-year-olds. Another section is 3.4 miles long.