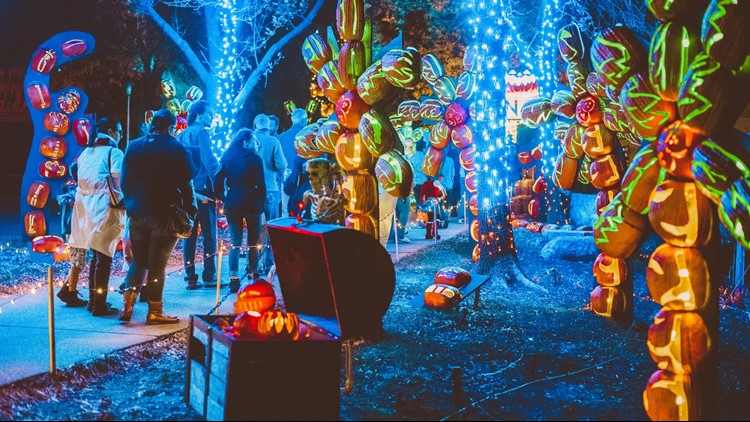 KUSA — Denver is one of just four cities in the country that will be treated to an impressive display featuring thousands of jack-o'-lanterns for 18 nights this Halloween season.

Pumpkin Nights is described as a family friendly, multi-sensory festival including more than 3,000 hand-carved pumpkins at the the Adams County Fair and Regional Park Complex from October 17 to November 4.

Guests will be able to wander along a half-mile path through eight Pumpkin Lands, each with a different theme, to check out the immersive displays. The event was started in 2016 at the Minnesota State Fair, and expanded to Colorado for the first time this year.

“We’re excited to bring the magic of Pumpkin Nights to Denver for the first time!” Pumpkin Nights co-founder Chelsea Kasen said in a news release. “We are especially excited to give attendees a behind-the-scenes look on our social media accounts at how the Pumpkin Lands are created and introduce the talented artists behind the installations.”

The different Pumpkin Lands include:

General admission tickets cost $20 and can be purchased here. If you’re looking to save a few bucks, night owl specials are also available on the Pumpkin Nights website. Kids three and under get in for free.