A business owner in Broomfield found a way to inspire his customers to shop local, and also share that extra help with schools in his community. 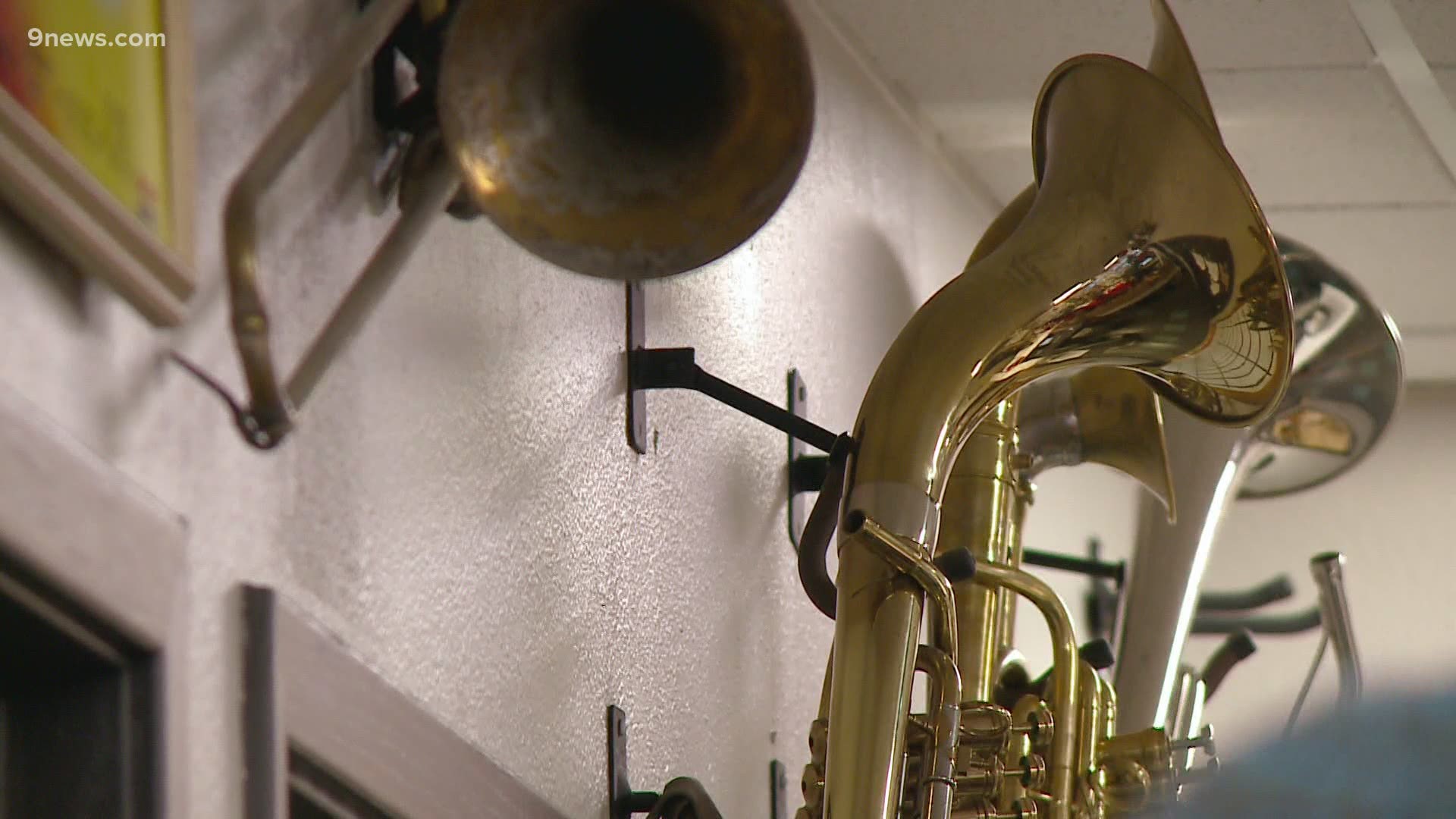 BROOMFIELD, Colo. — Like so many other small business owners, Brian Stevenson watched the pandemic turn his world upside down.

He and his wife own Rocky Mountain Music Repair in Broomfield.

“We never thought that schools would just stop doing music, and we we’re kind of put in a position where we were advocating for what was actually bad for our business,” Stevenson explained.

“We agreed, 150 kids in a room spitting into a trumpet is not a good idea, but at the same time it really hurt.”

Stevenson said school districts make up about 65-75% of his business. Professional musicians aren’t playing much right now, either.

“The simple fact is, if musicians aren’t playing their instruments, they don’t need our services as much,” Stevenson said.

For the holiday season, the shop got creative.

There is always a “shop local” push around Christmastime. This year, he found a different way to promote that idea.

“We started what we call the ‘School Secret Santa.’ The idea started small with, if each customer came in bought one extra thing, a $1-$2 item, we could then donate that item to a school and help teachers when they get back to playing music,” Stevenson said. “But also kind of help us as a local business as well. And it exploded!”

By Wednesday night, two days before Christmas, Stevenson had collected more than $14,000 worth of donations. Items included instruments, accessories, cash donations and more.

The donations went beyond just items in Stevenson’s store, too. Local musicians donated lessons, some of his vendors donated instruments and Stevenson repaired any donated used items so they were ready to go.

Some donors instructed their gift benefit a specific school. Other donations went into a big collection of items and Stevenson decided to let the teachers pick what they wanted from the pile. He hosted an event on Facebook Live so community members could watch how their gifts were received.

“I was shocked, definitely shocked there were so many things, shocked at the outpouring of community,” said Kati Sainz, a band teacher at Casey Middle School in the Boulder Valley School District. She was one of the teachers who participated in the giveaway event Wednesday night.

“It’s so frustrating when a kid has a broken reed or instrument, and we’re already hindered by the way were interacting now, and I can’t go over and adjust an instrument or hand a kid a new reed," Sainz said. "Brian is helping us out with supplying supplies, cleaning supplies – boy is that important right now. We’re really appreciative."

Stevenson said his shop benefited, too.

“The goal was to make the season kind of normal for us. Not looking to make some extra money, but we were way, way down and we were expecting to be down," Stevenson said. "If you’re not playing, what do you need to buy stuff from us for? So this made this part of the year a little more normal.”

The idea did more than just inspire customers to shop local this holiday.

It shared that help with schools in the community too.

“We don't want a year at schools where there [are] just no kids playing music. Whatever we can do to give them the best tools and opportunities to start music, love music, and do it for the rest of their life – that's what we want.”

Stevenson, who dressed up for the day in an elf sweater and played charismatic host during the virtual giveaway, said he hopes the event becomes an annual tradition.

"It got huge," he said "Way bigger than I thought, and I want to make it bigger next year!"

RELATED: AG Weiser in talks with ticket sellers and entertainment venues about possible refunds for Coloradans

RELATED: Colorado restaurants say COVID-19 bill is a band-aid, not a solution