Temperature swings, drought and freezes have taken a toll on Colorado's trees. 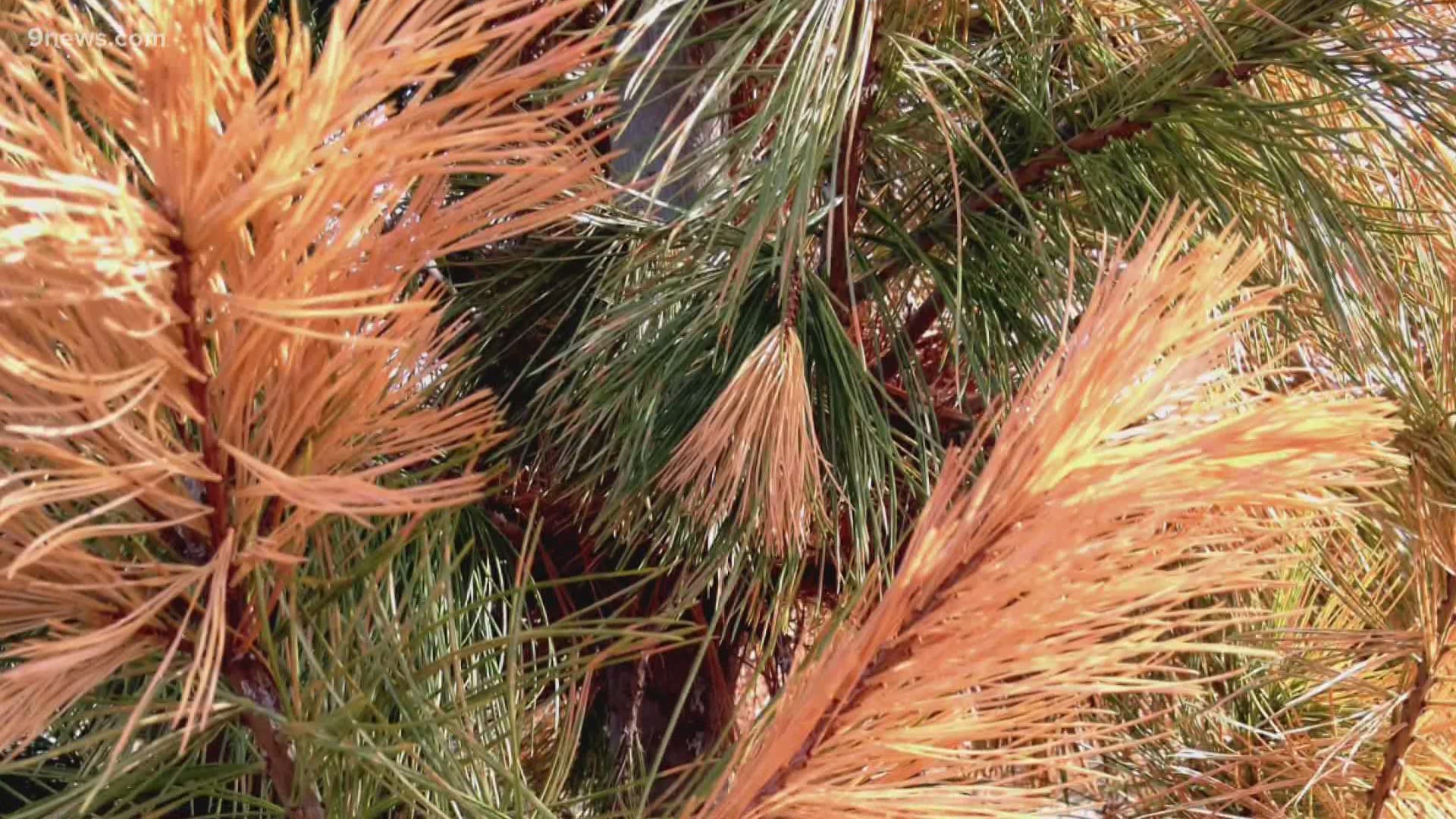 COLORADO, USA — The tree damage around the Front Range is very noticeable this spring.

There are also a lot of dead blossoms and even trees with no leaves at all yet.

Arborist Tony Hahn with Denver Commercial Properties said there were three bad weather events that were the root cause of that tree in Colorado since the end of summer.

The first weather event was the October 9-10 cold snap. Denver’s temperature dropped from 83 to 13 degrees. The 70-degree drop was the biggest 2-day temperature swing on record in Denver during October. And it tied the fourth biggest swing for any time of year.

"The timing couldn't have been worse," said Hahn. "Trees need time to do what we call 'harden off.' That's how they prepare themselves for winter."

Hahn described the hardening off process as when the tree converts free water in its cells and combines it with different soluble materials to create a kind of antifreeze.

He said that is a gradual process of temperature recognition, so when the temps drop that fast, it doesn't have time to react and protect itself.

Then another October storm brought all-time record low temperatures on the final two days of the month. The temperature swing wasn't bad, but there were single-digit lows three days in a row.

Hahn said he is finding mostly damage to pines across the Front Range. He said the needles are a rusty brown color, but the damage is mostly to last year's needles and not fatal to most trees.

"Most healthy trees can withstand a swing like that without too much trouble, but some of the older and weaker trees could have been killed by a cold swing like that," said Hahn.

A short period of drought hit the Front Range over the winter months. Only three storms brought measurable precipitation to the area through December and January.

That was just .44 inches of precipitation for two months, with the one long dry spell of 29 days with nothing at all.

"That's not too bad for the deeper part of winter when the trees are prepared," said Hahn. "But it could have weakened some of the older, weaker trees a bit."

Hahn said what he is finding so far this spring along the Front Range, is damage to lawns that were not hand-watered during that mid-winter dry spell.

The final blow to the trees was the freeze in mid-April. This time it was a deep freeze that got a lot of the stone fruit blossoms, like apples, plums, cherries, apricots, and even the famous Palisade Peaches.

Hahn said that the timing once again couldn't have been worse with this weather event.

"Most of the blossoms were just in the process of opening up," said Hahn. "If the blossom was still closed at the time, they may have survived."

Hahn said that he expects to see very little fruit on most trees, and some trees may not get any fruit at all this year.

RELATED: Here's why you might see rust-colored needles on your trees

Impacts of no peaches

Palisade peach farmers are reporting between 85-95% losses of their peach crops as a result of the April freeze.

The obvious impact is that Coloradans will be deprived of one of our greatest food traditions this year, but the trickle-down effect will be there as well.

"Our second biggest fundraiser of the year is the sale of Palisade Peaches," said Chris Hovendon a member of the Westminster 7:10 Rotary Club.

"Our saying, or our motto, is 'service above self,'" Hovendon said.

Rotary 7:10 has been working with C&R Farms in Palisade for years to get peaches at low cost, but that will not be happening this year.

"We received an email notification last week that said unfortunately due to the very cold weather, they lost 90 to 100 percent of their crop," Hovendon said.

Hovendon said this was a double whammy for the club because they already had to postpone their largest fundraiser of the year which is their annual March Celebrity Roast.

They had former Columbine High School principal Frank DeAngelis lined up for the event, but COVID-19 concerns caused them to put off they large gathering. Hovendon said they are still hoping to get that event done later in the year.

Hovendon said they turn the profits from peach sales into donations to area youth.

"We have one project called Computers for Kids, where we refurbish used computers and donate them to local high school and middle school kids," Hovendon said.

He also said they fund about $50,000 dollars a year to the Imagination Library program that gets new books into the hands of kids under 5 years old, and they also give away about $12,000 dollars a year in scholarships to graduating high school seniors.

“Losing Palisade Peaches is a bad deal for everyone, but you feel absolutely terrible for C&R Farms and the other farms that are in Palisade because that’s their livelihoods,” Hovendon said.

Where are the leaves?

You may also be wondering why a lot of the trees on the Front Range have not leaved out yet. Large deciduous trees like cottonwoods, elms, poplar, and ash are seen pretty much bare still in the area.

Hahn said they were likely stunned by the April cold snap, but thinks they will be OK. He said to expect some leaves to show in the next week or two.