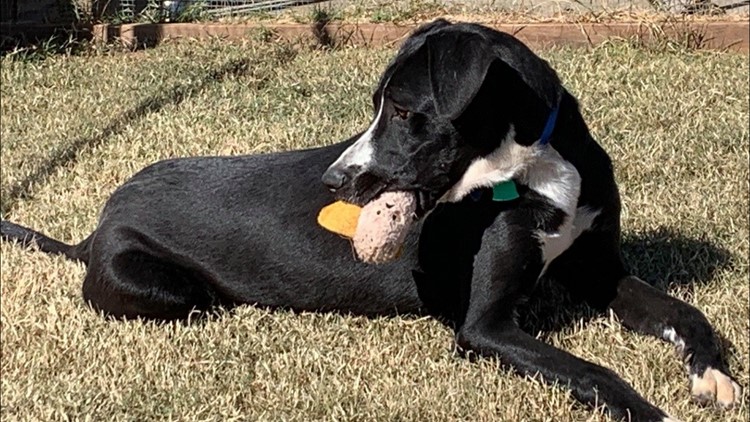 Exactly 5,000 dogs have arrived at the DFL's Buddy Shelter in Castle Rock from the shelter's partner shelter in Oklahoma since June 2016.

Each Wednesday, 25 to 30 dogs and puppies are loaded onto the Peaceful Animal Adoption Shelter’s Ride to Rescue vehicle in Vinita, Okla. to be transported to the Colorado shelter.

According to the DFL, there are times in Colorado when supply does not meet demand for adoptable dogs, while shelters in Oklahoma often have limited resources and more dogs than potential adopters.

Most dogs are available for adoption within days of arriving at the Buddy Center and typically wait less than six days to find new families.

Lucky number 5,000 was an adorable pup named Homer. He arrived at the Buddy Shelter at about 9 a.m. Wednesday. Homer is described an affection guy who was found as a stray in Stephens County, Okla. He was never claimed by an owner and was passed over by potential adopters there due to his large size.

The DFL believes Homer's chances for getting adopted are higher in the Centennial State.

“Homer, like the 4,999 dogs before him will get a second chance at a new life, with a loving family,” said DFL in a news release.

All dogs that arrive at the shelter are transferred with rabies and health certificates. If necessary, they are then spayed or neutered and brought up to date on vaccinations.

The DFL said it invests a portion of each adoption fee for dogs transferred from Oklahoma to fund spay/neuter and educational programs in the communities from where the dogs are transferred.

The DLF Buddy Center is located at 4556 Castleton Court in Castle Rock.