People in Colorado still aren't picking up their dog's poo. Why?!

A lot of Colorado's beautiful parks and open spaces are full of crap. And it's not a dog poo problem, it's a human problem. 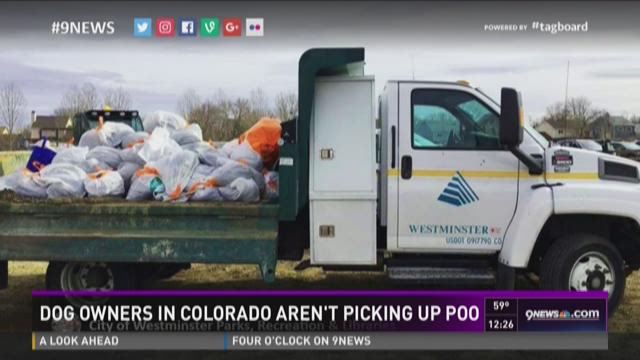 The photos show piles of dog waste, picked up and bagged by volunteers, all because dog owners somehow decided it wasn't worth picking up.

This week, the City of Westminster posted a flat-bed truck, yes a truck, with its entire bed stacked high with bags of poop. Those bags contained HALF A TON of dog waste.

It took volunteers just three hours to find that much feces left behind at the Westminster Hills dog park.

The City of Westminster had volunteers pick up poop at a park over the weekend, and they came up with more than A HALF A TON of crap.&nbsp;

Adult male polar bears weigh about 1,100 pounds. A panda bear weighs about 330 pounds as an adult. So, volunteers spent three hours of their time picking up more than three panda bears' worth of poop!

"Thank you to everyone who came out for this unpleasant but necessary undertaking! Watch for another clean-up in a different section in the near future. Please help keep the park clean and safe by picking up after your dog," the city wrote on its Facebook page.

This is hardly a problem unique to Westminster. More importantly, this isn't a dog poop problem, it's a human problem.

A Denver dog park actually closed because there was too much crap in it. Seriously?!

The Railyard dog park had an "unsustainable" amount of dog waste in it, and closed so that volunteers and dog owners could pick up some of the doody. It later reopened.

The city of Arvada found more than 600 pieces of left-behind poo near the Arvada Center in the spring of 2016.

Last spring, the city of Arvada took a bit more of an artistic approach to the problem, marking waste left behind in their sculpture garden near the Arvada Center with small orange flags - more than 600 of them. Volunteers removed the flags, and the poo, a few days later.

The Jefferson County Parks Department tried to get ahead of the problem with a campaign called "Let's doo it" around the same time.

It didn't help save Elk Meadow dog park, which was nearly shut down due to an overwhelming poop-left-behind-problem.

Why are we, as good humans, making people we don't even know, volunteer their time to clean up after our own dogs? Why?

Volunteers from Jefferson County open space picked up more than 400 pounds of doo doo at Elk Meadow dog park in the spring of 2016.

All this time, kind-hearted people continue to do the dirty work of what responsible dog owners should be doing all along; volunteers picked up more than 400 pounds of poop at Elk Meadow last September.

We bet our dogs, if they could read this story, would be pretty ashamed of the humans who are making other nice humans pick up their poop.

Maybe you're a nice human too, but a human who has said to yourself, "Oh, I forgot a bag" or "I don't want to carry that on my hike."

Well, there is no poop fairy and someone else will have to pick it up if you don't. And that's not very nice at all.

Colorado is gorgeous. We have some of the best nature trails, parks and hiking in the country.

Let's keep it that way.

Can we agree to pack out our pets' own waste next time we're on a walk or a hike? And maybe, for some extra karma points, bring a few extra bags along, too?

We're interested to hear where you think the area is that needs the most help. Maybe we'll do our part to help clean it up. Send us a note here!