$354 million in funding and a breakthrough in testing from researchers at University of Denver may be a big step in the fight against Alzheimer's. 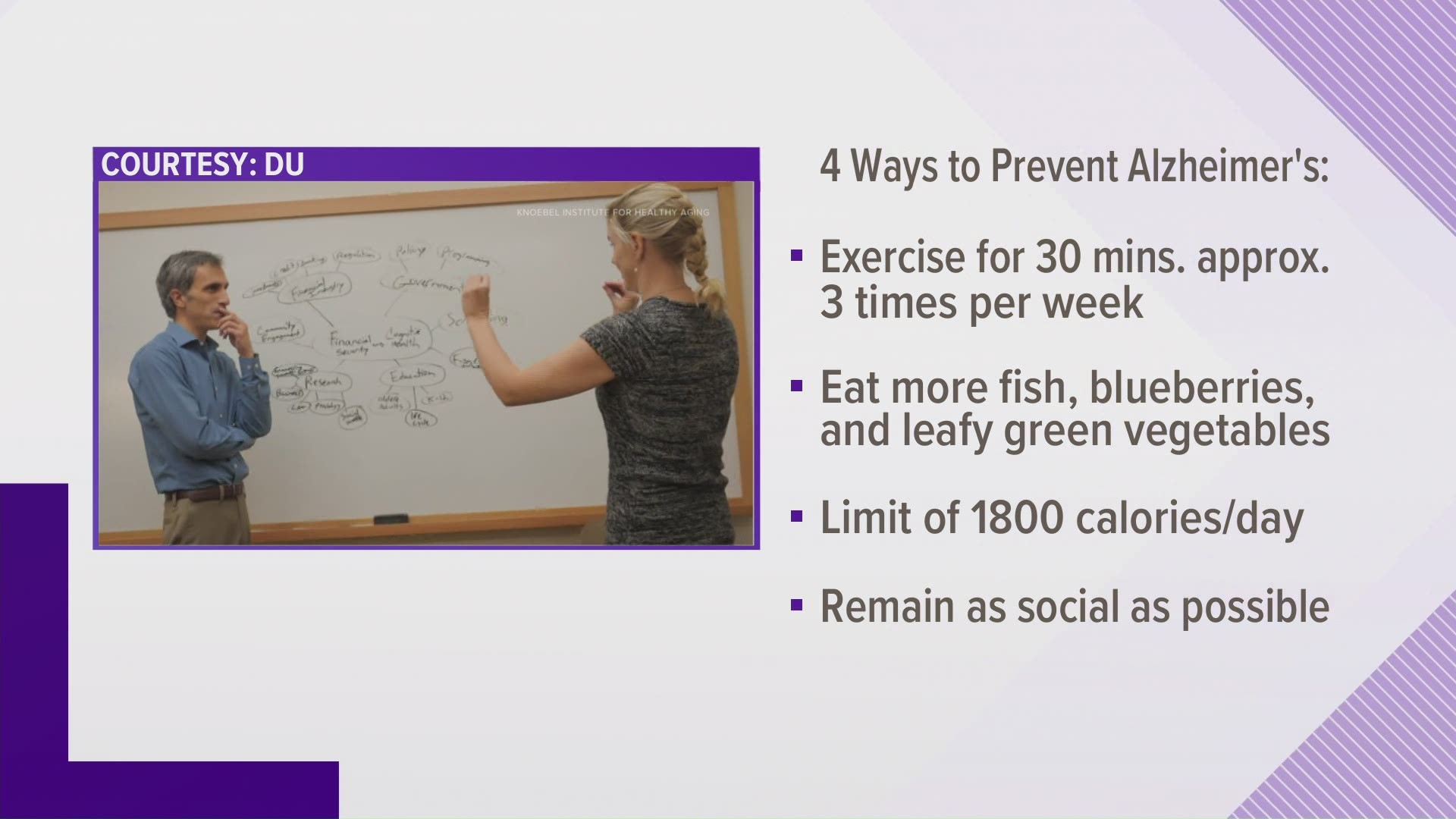 DENVER — The Senate Appropriations Committee has proposed a $354 million increase for Alzheimer’s and dementia research funding at the National Institutes of Health (NIH) in their proposed 2021 fiscal year budget.

The announcement was made by Harry Johns, president and CEO of the Alzheimer's Association.

"If signed into law, annual Alzheimer’s and dementia research funding at the National Institutes of Health (NIH) would be over $3 billion," Johns said.

Jim Herlihy, senior director of communications for the Colorado Chapter of the Alzheimer Association, said that Alzheimer's is the sixth leading cause of death in the U.S., but recent estimates rank it as high as third behind heart disease and cancer deaths in older Americans. Herlihy said it remains the only major killer with no prevention, no treatments and no cure. Further, the cost of care is now running into the billions of dollars.

Hirlihy said the math is daunting. Treatment for patients with Alzheimer's and other dementias in America this year was $305 billion, and that doesn't include unpaid caregiving provided by family members who have moved patients in with them. Hitlihy said those "volunteer" family caregivers provided an estimated 18.6 billion hours of unpaid care in 2019, valued at $244 billion, or more than 11 times the total global revenue of fast-food powerhouse McDonald's ($21.2 billion).

Dr. Lotta Granholm-Bentley, executive director of University of Denver's (DU) Knoebel Institute for Healthy Aging, hailed the new funding, while this week announcing another breakthrough in research. She and a team of researchers have identified a process to diagnose potential Alzheimer's patients early in life.

She said the Knoebel Institute at DU, in collaboration with the Karolinska Institute in Stockholm, has developed a blood test for early diagnosis. Granholm-Bentley said she believes they can now see early on if you are a candidate for Alzheimer's by analyzing tiny little bubbles located in the blood that comes from your brain.

"It's kind of like the murder investigations where you look in someone's trash. Because we can actually identify the bubbles that came from the brain from a simple blood sample," she said. "And then we subtract all the bubbles and we look inside of them. And that's when we discover that 10 years or more before someone has Alzheimer symptoms, there are actually already Amyloid and Tau and inflammation in these little bubbles."

Granholm-Bentley said the Amyloid and Tau are the two proteins in the brain that are responsible for the plaques and tangles that cause Alzheimer's disease. Detecting them years in advance, she explained, means once we have a drug, we can begin treatment far in advance of onset and hopefully eliminate the disease.

Her team discovered this in studies of people with Down Syndrome who have a very high rate of Alzheimer's disease. Granholm-Bentley said that population may ultimately hold the key to a cure for the rest of us.

RELATED: The other side of the pandemic may look very different for big-box restaurant chains

RELATED: Demand for smaller turkeys expected to increase this year