Colorado auto dealers and reports show a rising trend in used car sales, something that has also resulted in rising prices for used cars. 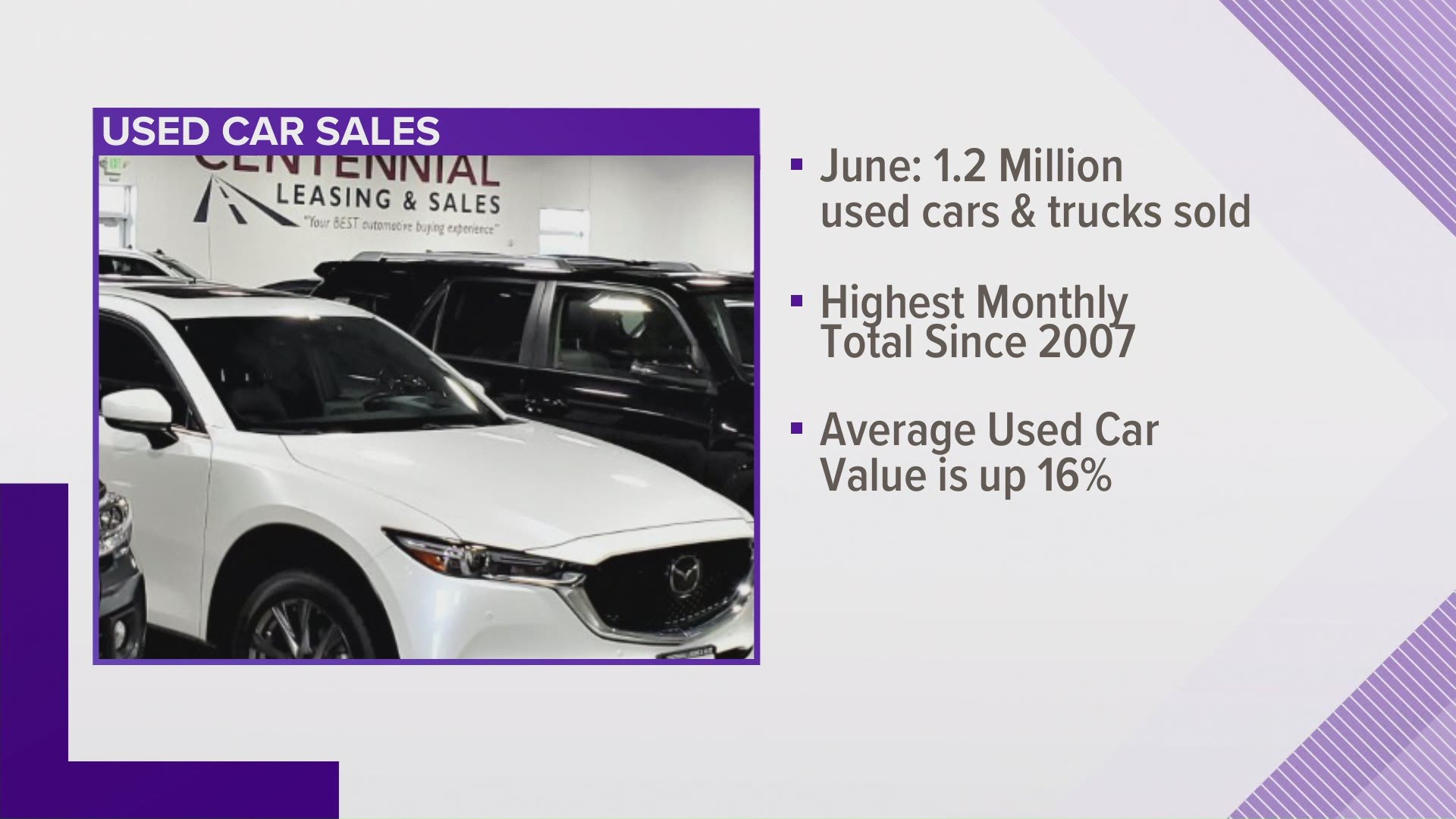 COLORADO, USA — Used cars have in recent months become a hot commodity in the car business, according to local car dealers and the automotive research site Edmunds.com.

"I've been in this business over 40 years and I've never seen this happen,' said Steve Perkins, co-owner of Centennial Leasing and Sales.

Perkins and his team move hundreds of new and used cars every year. He said this year has been "unusual."

"Post-COVID, your car or truck sitting outside is probably worth more today than it was pre-COVID," Perkins said.

Dealers have so few cars, they are running ads and cold calling people asking them if they'd like to sell their old beater. And because a lot of those cars are just sitting in the garage since so many people aren't going anywhere, the owners are cashing in.

Perkins said it's a perfect storm of buyer demand vs. a huge supply shortage.

"It's driven by supply and demand — very Simple," Perkins said. "When the new car manufacturers shut down and their suppliers shut down, they had challenges getting ramped back up."

The increase in demand, Perkins said, developed as consumers were forced to curtail their spending habits in the pandemic and suddenly found themselves with a lot of extra cash.

The U.S. Bureau of Economic Analysis (BEA) in May reported that the personal savings rate hit a record 33%, as reported in a CNBC article.

Meanwhile, an August 2020 report from the BEA said although personal income decreased 2.7% that month, personal expenditures increased by $141.1 billion, or 1%.

"[Consumers] are looking to replace their cars, and they have been, so it's created a shortage," Perkins said.

According to Edmunds.com, franchised cars dealers sold 1.2 million used cars and trucks in June, up 22% from a year earlier and the highest monthly total since 2007. The average value of those used cars jumped 16% in July alone.

A few examples of the increased value of the cars from Centennial Leasing and Sales since the beginning of the pandemic:

Perkins added that this trend won't last a whole lot longer. New car production is coming back online, the economy will get going again, and he said the supply and demand ratios will rebalance. At that moment, he told 9NEWS, used car prices will fall back again.

"Probably by second quarter of next year, we'll start to see some leveling out," Perkins said. "We expect new car supplies to be back up to normal levels. So it's probably six months. I'm not saying they're going continue to appreciate like they have been. They're going to soften some. But it's going to probably be six more months before we see a change in supply-demand."