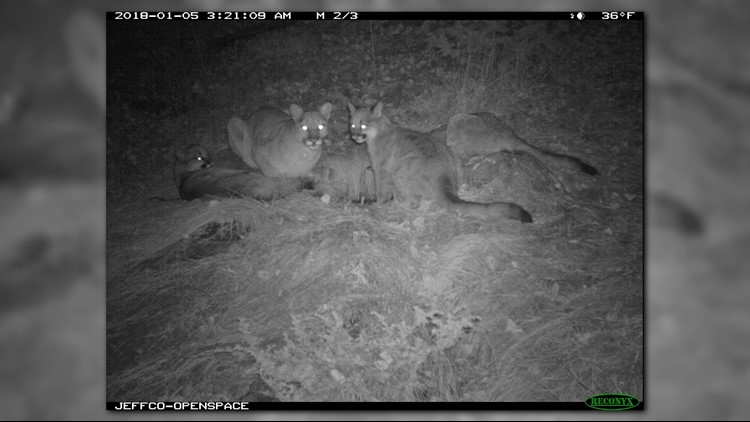 KUSA — KUSA – This weekend marked what some would call the “unofficial end of summer”.

Exploring the great places Colorado has to offer is great as long as you’re not an idiot about the whole thing, that’s great! This sentiment, for the record, goes beyond cleaning up your trash, honoring right of way, cleaning up after your dog, not trampling on fragile plant life and all the other things we like to blame on Texans/Californians (for the record: that was a joke. There are plenty of respectful Texans/Californians and disrespectful Coloradans, don’t @ me).

It’s an ethos that also extends to wildlife. Seriously: you’re exploring their home, and while it might be awesome to see a bear, you probably shouldn’t take a selfie with it. Here are some other tips from Colorado Parks and Wildlife about what to do if you encounter wild animals in Colorado’s backcountry.

Colorado Parks and Wildlife defines bear country as pretty much anything west of Interstate 25. And, since most hiking trails in Colorado are west of I-25, be aware that seeing one of these highly intelligent, huge creatures is a possibility.

The good news? CPW said wild bears rarely attack unless they’re threatened. So, if you surprise a bear on the trail, stand still, be calm – and then let the bear identify you and leave. If you see cubs, that means the mom’s nearby, so make sure to stay out of their way.

RELATED | How to interact with Colorado wildlife

And though it seems easier said than done, CPW said to talk in a normal voice around bears, and never to run or climb a tree.

But, let’s say the bear is legit not leaving. CPW said to continue to stay calm and wave your arms slowly overhead. Bears might seem scary, but they’re really just trying to get to know you.

With that being said, sometimes bears could approach – especially if they think you have a snack for them. CPW said if that happens, to stand your ground and to yell or throw rocks at the animals.

And if the worst happens, here’s what CPW recommends:

“If you’re attacked, don’t play dead. Fight back with anything available. People have successfully defended them¬selves with pen knives, trekking poles, and even bare hands.”

Police remind people not to take selfies with bears, as if that has to be said

‘I can't go because there is a bear behind me:' Colorado Springs woman finds surprise in garage

That viral video of bears in an Aspen tree? Not adorable, experts say

CPW said mountain lions are generally in remote areas with plenty of deer and adequate cover. But, with Colorado growing so fast, more humans are moving into their turf – and that means more encounters with them.

Being attacked by a mountain lion is super rare, and there haven’t been concrete studies about what works best if you see one.

Their first tip is to make sure you aren’t hiking alone in mountain lion country and to watch your kids. Secondly, if you do happen to spot a mountain lion, don’t approach it (this is something that shouldn’t need to be said, but that’s the world we live in).

Like with bears, CPW said to keep calm and talk firmly and calmly. Back away slowly and definitely don’t run – this could make it want to attack you.

Next, do everything you can to appear larger, from waving your arms to opening up your jacket. If the lion starts getting aggressive, CPW said to throw stones or branches at it.

Finally, just like with bears, CPW said to fight back. Seriously, here are their tips:

“Lions have been driven away by prey that fights back. People have fought back with rocks, sticks, caps or jackets, garden tools and their bare hands successfully. Remain standing or try to get back up!”

First off, these things are huge: between 800 to 1,200 pounds and six feet tall. And since they’re large and in charge, they don’t really fear humans in the wild.

So, keep your distance – even though CPW said they are pretty curious and are known to sometimes approach houses and look through windows.

If you accidentally run into a moose, CPW said to look out for signs of aggression which include laid-back ears, raised hairs on the neck and licking of the snout.

Moose especially do not like dogs, so if you’re hiking in the backcountry, keep your pup on a leash or at home.

If the moose threatens you, CPW said to stay calm (again, easier said than done) and to talk, make your presence known and back off slowly.

RELATED | Can you recognize the man who is bothering this moose?

RELATED | The history of the moose in Colorado

CPW said if a moose does charge to run as fast as you can and to put a large object – like a Boulder or a tree – in between you and the huge animal.

Unlike mountain lions and bears, CPW said moose encounters are pretty common, but that not being an idiot (i.e. not voluntarily getting too close to them) goes a long way.

There are coyotes all over the Front Range, and like moose, they don’t really fear people. They’re also known to attack pets and approach people too closely.

CPW said if a coyote approaches you to not run or turn your back, and instead to be as big and loud as possible and to throw objects.

Face the coyote and back away slowly, CPW said, and if you’re attacked, fight back.

If you’re afraid of encountering a coyote, CPW said to hit the trails during the day, walk with a walking stick, have a deterrent spray on you and to carry a noise maker/stuff to throw.

There is a producer at 9NEWS who, as this story was being written, basically admitted to having an irrational fear of mountain goats and bighorn sheep.

Vigorous research revealed that “several aggressive mountain goat encounters” prompted a trail closure in Olympic National Forest. While there haven’t been issues of this magnitude in Colorado, there are two good lessons to learn about goat encounters that are applicable anywhere.

First off, if you’re in mountain goat country, pee at least 50 feet off the trail. Mountain goats are attracted to urine, and it’s not great for either species if they’re hanging too close to the trail.

But, say you do accidentally get too close: CPW said to back away slowly and keep the animal in your view. Never turn your back to a goat or sheep, because butting is their natural behavior.

At places like Mt. Evans where sheep are pretty commonplace, CPW emphasizes not to feed them. Some of them have actually figured out they can go to cars and ask for food – that’s not good, and don’t contribute to the problem.

This is a huge topic. Seriously: if you’re a Colorado trail user, you’ve probably encountered one, and it’s definitely not the highlight of your day.

CPW said if you see a snake on the trail to slowly back away from it and to give it an easy escape route. Wait for it to pass by the trail or give it a few minutes. Usually when rattlesnakes bite people, CPW said it’s because they’re trying to pick them up with sticks.

Rattlesnakes are the most active when it’s between 50 to 80 degrees outside. If it’s too hot, they’re probably in the shade. Also, they don’t go above 9,000 feet, so if you’re on an alpine hike, these critters should not really be a concern.

To avoid a rattlesnake bite, CPW recommends wearing thick boots and pants, since they’ll usually go for your feet and ankles.

RELATED |You asked, CPW answered: What to know about rattlesnakes

Be aware too: this probably means no headphones for your trail run.

What happens though if you are bitten? The Mayo Clinic said to call 911 immediately, and to remain calm. Position yourself so that the bite is below the level of the heart, and clean the wound.

While you’re waiting for help, the Mayo Clinic said not to use a tourniquet or apply ice, and to avoid caffeine or alcohol, since that could speed up your body’s absorption of venom.

Have you encountered another animal? Have a story to share? Just want to talk to a lively and vibrant group of millennials who just want love? Email us at webteam@9news.com!