Trails on the 14ers were covered later than usual while snow, tree trunks and debris from avalanches blocked many backcountry roads that give access to trailheads. 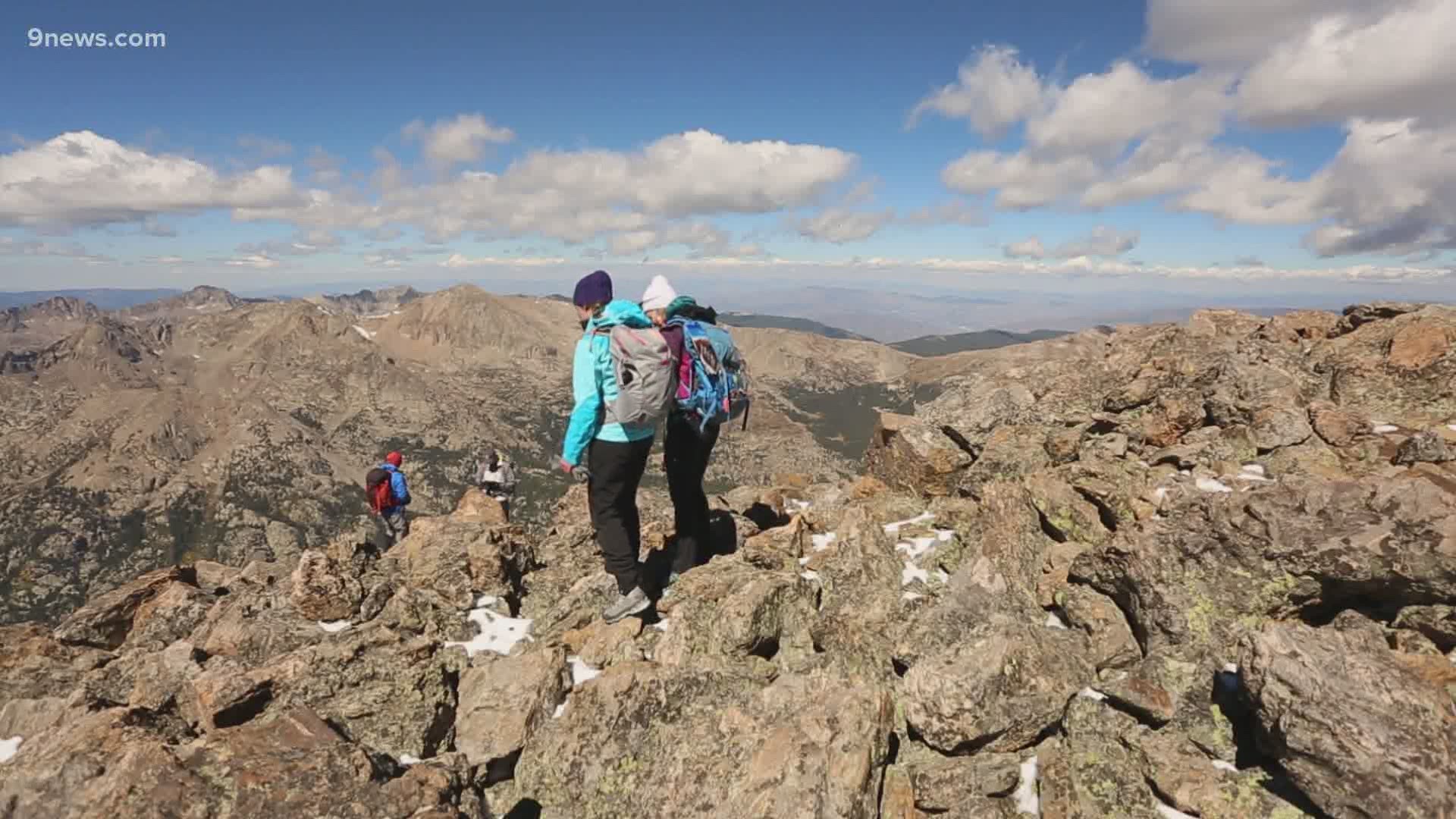 ASPEN, Colo. — The lingering snowpack and avalanche debris from winter 2019 reduced the number of people hiking Colorado’s tallest peaks by about 18% last summer, according to a new report.

> Video above: What can we do to keep our state's 14ers clean?

The effects of late winter were even more pronounced in the Elk Mountains outside of Aspen where there was an estimated 44% plunge in use between summer 2018 and 2019, the report said. That was the largest decline among mountain ranges in the state.

Colorado was pummeled with heavy snow in March 2019, which triggered a prolific cycle of avalanches. Snowfall also lasted well into spring. As a result, trails on the fourteeners were covered later than usual while snow, tree trunks and debris from avalanches blocked many backcountry roads that provide access to trailheads.

CFI staff members install a counter on Castle Peak southwest of Aspen each summer to gauge use. A massive avalanche in upper Castle Creek Valley took out a bridge and littered the roadway with massive tree trunks.

“It was mid-July before we were even able to get in there,” said Brian Sargeant, development and communications manager.

Credit: Anna Stonehouse / Aspen Times
Capitol Peak trailhead sits outside of Aspen in Elk Mountains. The trail starts at 9,400 feet and climbs to the 14,130-foot summit of Capitol Peak.

Hiking on many of the state’s 54 peaks above 14,000 feet didn’t start until about one month later than average, CFI executive director Lloyd Athearn noted in the report.

“The drop in hiking use between 2018 and 2019 was even more dramatic when you consider that 2018 was a drought year in which some trails were snow-free in May, allowing fourteener hikers to get out earlier than normal,” Athearn said in a statement.

This summer, it’s back to drought. Sargeant said it’s a safe bet that hiker days have soared again due to dry conditions early in the season as well as the surge in outdoor activity during the coronavirus pandemic. Trails of all types are seeing increased use as people try to stay active.

“We’re expecting it to be higher than 2018,” Sargeant said. It’s likely to be record use, he said.

CFI monitors hiker days rather than hikers because some people make trips up several peaks or repeated trips up the same fourteener.

CFI has produced an annual report in recent years about the use of the tall peaks. The conservation group was founded in 1994 to preserve and protect the natural integrity of the 14,000-foot peaks through trail improvements and education. As part of its mission, it tracks how many people are using the peaks and the effects on the trails.

CFI’s collected data last year from counters at 19 locations adjacent to summit hiking trails on 20 peaks. Hiking use for other fourteeners was based on crowd-sourced checklists on the popular website 14ers.com, used by 17,000 individual hikers, as well as modeling that uses factors such as trail difficulty and length, and distance from the Front Range.

RELATED: A Breckenridge man will summit a popular Colorado 14er for a 100th time

The Elk Mountain fourteeners tend to be among the least hiked and climbed in the state because of the difficulty, Sargeant said. Castle Peak is the exception. While access can be challenging, the hike itself typically is not. The number of hikers fell to an estimated 1,320 last year from 1,508 in summer 2018, according to CFI.

The other fourteeners near Aspen are Maroon Peak, Pyramid Peak, Capitol Peak and Snowmass Mountain. Annual hiker days are estimated at lower than 1,000 per peak.

La Plata Peak and Mount Elbert, part of the Sawatch Range, are located on the east side of Independence Pass.

CFI started an education effort a couple of seasons ago to alert hikers about the challenges and danger of the Elk Mountain fourteeners. Sargeant said that could be affecting the number of hikers attempting to summit those peaks.

CFI’s data indicates hikers emerged with gusto once the snow melted last year. Statewide hiking levels were down an estimated 55% in June and 20% in July. Hiking was up an estimated 16% from 2018 between Aug. 1 and Oct. 7.

RELATED: People are leaving everything from cardboard signs to toasters to dirty underwear on Colorado’s 14ers

• Quandary Peak near Breckenridge edged out Mount Bierstadt near Georgetown as the most climbed Colorado fourteener for the second year in a row. Both mountains had season use totals near 35,000 hiker days.

• 57% of statewide hiking occurred on the 11 peaks closest to the Front Range.

• If you want anything resembling solitude, don’t climb on weekends. Saturday use was highest at 25.7%, Sunday was at about 20% and Friday at nearly 14%.

> Click here to see the full report on http://www.14ers.org