Here's where fireworks are and are not legal in Colorado

Any firework that leaves the ground is illegal in Colorado; however, depending on where you live, there might be certain types that are legal, like sparklers. 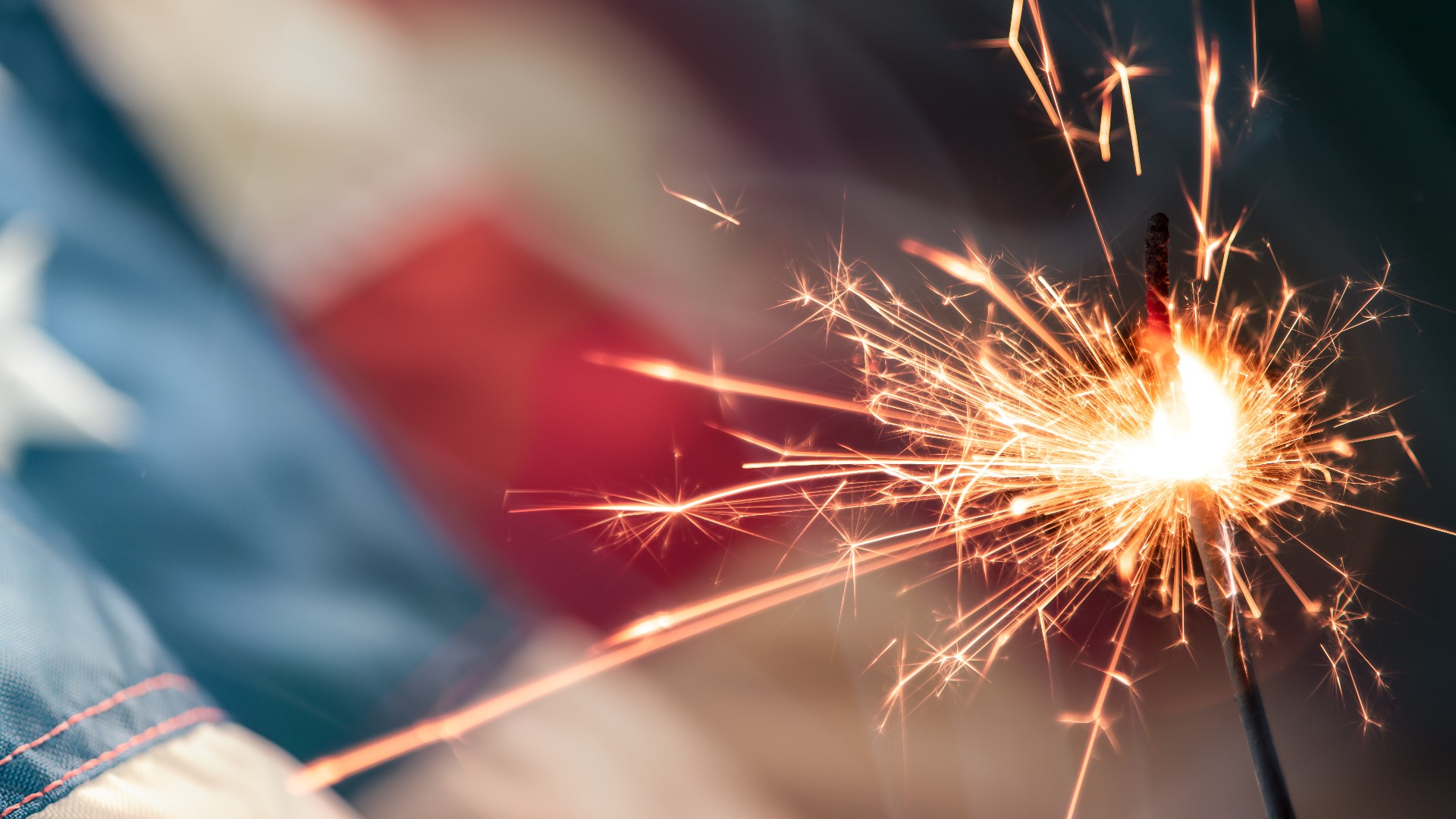 DENVER — Fireworks on the Fourth of July are a staple of summer and a fun way to celebrate with the family, but it's important to have fun in a safe and legal way.

Any type of firework that leaves the ground is illegal in Colorado.

Depending on where you live, however, there might be certain types of firecrackers that are permitted such as sparklers, snakes, fountains, tanks, smoke bombs, wheels and ground spinners.

Below is a list of fireworks laws, rules, restrictions and guidance for summer 2021 across the Denver metro area and other parts of Colorado.

> Have a firework or burn restriction update? Email us here.

RELATED: Map of 4th of July firework shows across Colorado

The are currently no fire restrictions in place for unincorporated areas of Arapahoe County, Centennial, Foxfield and Deer Trail.

"Permissible fireworks" include sparklers, cones, snakes and fireworks that don't leave the ground or fly through the air.

The possession and use of any firework (including sparklers) is illegal in Arvada.

The Arvada Police Department will enforce fireworks violations and ticket all people in possession of fireworks, and all fireworks will be confiscated.

The sale, possession and use of certain fireworks is legal in Aurora.

Fireworks can be purchased and used in Aurora only from June 15 to July 4. Fireworks that do not leave the ground or explode are allowed.

In addition, professional firework displays planned for July 3 in Avon have been canceled due to extreme fire conditions. However, minus the fireworks, the Independence Day celebration will continue as planned.

It is illegal to use or possess any fireworks within Boulder city limits, including all city parks and on Open Space and Mountain Parks land.

Police will have increased patrols with officers looking for this type of activity during the holiday week. Citations will be issued, and fireworks will be confiscated. If you see fireworks, please report it by calling 303-441-3333.

The annual Fourth of July fireworks show, Ralphie's Independence Day Blast, has been canceled in 2021.

Fireworks of any kind are prohibited within town limits.

Fireworks that leave the ground such as cannons, mortars, bottle rockets, Roman candles, missiles and aerial spinners are illegal.

Any violation of City of Brighton Municipal Ordinance is punishable by a fine up to $2,650 and/or one year in jail.

Most fireworks are illegal within the North Metro Fire Rescue District, which includes the City and County of Broomfield.

Only fireworks purchased at stands in Castle Rock are legal, and only on July 4. Remember, fireworks that leave the ground, explode, or break off into pieces are not allowed.

If you bring in fireworks from outside Colorado, they are mostly likely illegal and subject to seizure, summons or fines.

Centennial residents might use and possess certain "permissible fireworks," limited only to those that do not explode, leave the ground or fly through the air.

All types of fireworks with a fuse and/or requiring a flame for ignition are illegal in Colorado Springs. Only novelty items (snappers and poppers) are allowed. To report the use of fireworks in your neighborhood, call the non-emergency dispatch line at 719-444-7000.

Personal fireworks that are legal under state law are now allowed in Commerce City until 11 p.m. July 3 and 4. Approved by the City Council at the June 7 meeting, the city’s new fireworks ordinance also allows the sale, storage, possession and handling of “permissible fireworks” in the city limits.

The existing penalties for fireworks violations remain in place, with fines starting at $500 for a first offense and $750 for a second. Fireworks are still prohibited at all times in public areas such as city parks, trails and other open spaces.

Anything that explodes or leaves the ground — cherry bombs, Roman candles, firecrackers, bottle rockets, shells and rockets, M-80s and M-100s and helicopters — are not allowed.

Delta County is under a Stage I fire ban in July 2021.

It is illegal to discharge any fireworks and/or conduct any open burning in the City of Delta while under the Stage I Fire Ban issued by Delta County.

There are currently no fire restrictions in place in Douglas County.

Elbert County is under Stage I Fire Restrictions in July 2021. The sale and use of fireworks matches compliance with state and local regulations.

The El Paso County Sheriff's Office has lifted the fireworks ban for unincorporated El Paso County. The county is no longer in Stage I Fire Restrictions in July 2021.

Fireworks that leave the ground are illegal in Evans. Legal fireworks include sparklers, trick matches, noise makers and glow worms. For additional information call the Evans Police Department at 970-339-2441.

All fireworks, including sparklers and snakes, are illegal to sell, possess or use in the city of Fort Collins.

The possession and use (without a permit) of fireworks of any kind in the city of Fort Collins may result in confiscation of the fireworks, and issuance of a summons into municipal court and a fine up to $2,650. To report hearing or seeing fireworks, click here.

Any firework that leaves the ground is illegal.

All fireworks are banned within Golden city limits.

Fireworks that explode or leave the ground are illegal. That includes bottle rockets, Roman candles and exploding fireworks such as firecrackers, artillery shells and M-80s.

Jefferson County is not under any fire restrictions in July 2021.

Cylindrical or cone fountains, wheels and ground spinners, illuminating torches and colored fire, dipped sticks and sparklers, toy propellant or toy smoke devices, trick noisemakers, and snake or glow worms are all permissible when a fire restriction or ban is not in effect.

If it leaves the ground or explodes, it's illegal in Johnstown. Illegal fireworks include torpedoes, skyrockets, rockets, Roman candles and day-glow bombs.

The use of all fireworks, including items such as sparklers, snakes and smoke bombs, is prohibited within Lafayette city limits. Those in possession or caught using them will be ticketed.

By Lakewood city ordinance, all fireworks are prohibited except for professional displays. This includes items like sparklers, Roman candles and smoke bombs. Fines for illegal fireworks can reach $2,650.

Any fireworks that leave the ground or explode are illegal.

It is unlawful to furnish fireworks to anyone under 16 years of age. Those under 16 are also prohibited by law from buying fireworks.

All personal fireworks are illegal in Littleton, including sparklers.

If you see or hear fireworks, report it to the Littleton Police non-emergency number at 303-794-1551.

Only permissible fireworks, as defined by Colorado state law, are allowed within the Lone Tree city limits.

Fireworks that are aerial, explode or fragment – such as bottle rockets, mortars, Roman candles, firecrackers, cherry bombs and similar more powerful fireworks – are illegal in the City of Lone Tree.

All fireworks that leave the ground and explode are illegal in Longmont.

The sale or use of any firework that leaves the ground is illegal in Loveland.

Mesa County is under Stage 1 Fire Restrictions which prohibit the personal use of fireworks in July 2021. Only professional displays are allowed.

The possession, manufacture, storage, sale, handling and use of fireworks are prohibited in the City of Northglenn.

Any fireworks that leave the ground or explode are illegal in Northglenn. People caught using them face a minimum fine of $1,000. Home/property owners and individuals in possession of fireworks may also be cited.

To report firework activity in progress please call 303-288-1535. If not in progress, report online here.

Fireworks that leave the ground are illegal in Parker. Report illegal fireworks online here in Parker.

Any device that explodes or lifts off the ground is not allowed in Pueblo city or county.

However, items like ground spinners, fountains, sparklers and smoke bombs are permitted under the municipal code.

In Thornton, fireworks cannot be possessed, made, sold, handles or used. This includes any firework that has to be lit. Novelty items like snap pops or confetti-filled items are permissible.

A first violation is a minimum fine of $500, and second violation is a fine of $1,000. To dispose of fireworks without penalty, bring them to any Thornton Fire Station through July 10.

Fireworks that explode, emit a loud bang, leave the ground due to an explosive charge, or fly through the air self-propelled are illegal for handling, possession, sale, storage and/or use within the City of Westminster.

All fireworks, including fountains and sparklers, are illegal.

All fireworks that are not part of a professional display permitted by Windsor Severance Fire Rescue are illegal in the towns of Windsor and Severance.

RELATED: How to be safe when using firecrackers this 4th of July

> Have a firework or burn restriction update? Email us here.

RELATED: 'We're asking you to leave it to the pros': 2 women seriously injured by illegal fireworks share cautionary tale