Palisade is known for its peaches and wine, and will soon be home to a world class mountain bike trail. Meet some of the people who make these things happen. 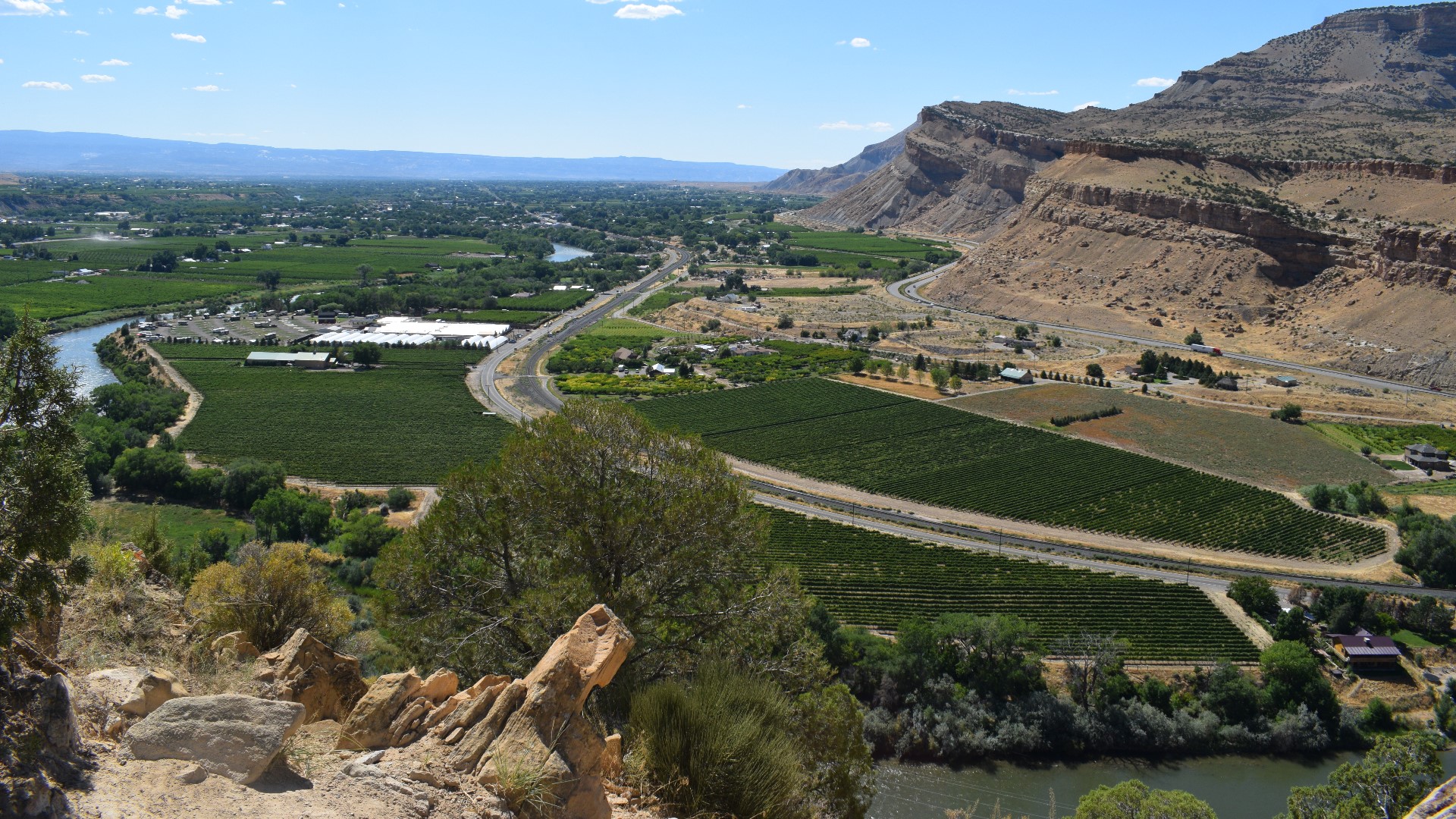 PALISADE, Colo. — In today’s society, contention and divide are the norm. But I can name two things that most people would agree are hard to hate: fresh fruit and good wine. (Please find something to be mad at here, Twitter trolls!)

These are things that this Western Slope town of around 2,700 people has in spades … which might explain why even on a 100-degree summer day, everyone seemed pretty happy to be in Palisade. It’s not hard when many residents have what us Front Range office-dwellers might consider dream jobs.

That's definitely the case for Becky Davis. She and her family own and operate Davis Farms, which grows and sells Palisade’s famous peaches. She said doing this was something of an accident: Two decades ago, her family moved to Palisade from Steamboat.

“We needed some extra money, and so we bought a truck-load of peaches and went to the place that we moved here from, and started selling peaches,” Davis said. “It got in our blood, and we’ve never missed a weekend in 19 years.”

Credit: Allison Sylte, KUSA
A view of the orchard at Davis Farms in Palisade, Colorado.

The Davis’ operate Nana’s Fruit and Jam Shack, which has locations in both downtown Palisade and on the Fruit & Wine Byway. It’s a business full of happy things, like jams, fresh peaches and flowers. But Davis is quick to point out bringing people joy is hard work that involves everyone from her husband to her adult children to her 80-year-old mother, who helps pick and pack peaches.

Even in January – the opposite of growing season – Davis said there’s work to do, and then it’s nonstop from June to September (she said she always takes a big vacation when the summer’s over and she’s finished working seven days a week).

RELATED: Colorado farms and orchards where you can pick your own

Credit: Allison Sylte, KUSA
Some of the fruits available at Nana's Fruit and Jam Shack in Palisade, Colorado.

This quote sums up Palisade pretty well – and in addition to peach farming, it rings true for other “dream jobs” like making wine and building mountain bike trails. Keep reading to hear from people who do just that.

This story is part of our weekly 9Neighborhoods series. Join us on the 9NEWS Instagram starting at noon on Friday for a photo tour of Palisade ahead of the town's annual peach festival! It runs Aug. 16-18 in Riverbend Park. For more information and to buy tickets, click/tap here: bit.ly/33CdQi8

Welcome to the 'banana belt' of Colorado

Not too long ago, what was once Palisade was nothing more than a stretch of sagebrush desert in a desolate part of Colorado known for mining. In fact, some of the first white settlers who came to the area in the late 1880s (Native Americans had been farming here for 10,000 years) were disappointed by what they found.

But some people saw potential: namely, that the Colorado River is there – and a series of dams, diversions and canals could be used to irrigate the soil. This effort transformed the sagebrush desert of Palisade into a veritable oasis, one that’s home to orchards and vineyards that thrive thanks to the combination of warm days and cool nights.

RELATED: The cool spring could extend the season for peaches in Colorado this year

Palisade’s unique climate – referred to as the “Banana Belt” – comes from a downslope wind focused through De Beque Canyon (this is the one Interstate 70 runs through) that warms the area down the valley and prevents frost damage during the spring.

It hasn’t been entirely “peachy” during Palisade’s history, though (pun intended). A particularly rough winter in 1962-63 wiped out most of the existing fruit trees, as well as another severe cold snap in 1989. That, and the pressure for high-density development on irrigated land amid an oil boom in the area, threatened the town’s identity, but never succeeded.

And that’s where Palisade is today: a place four hours from Denver via I-70 that people from all over the world come to in order to experience simpler pleasures that are far from simple to produce.

Appreciate the work that goes into a glass of wine

Yes, it is unique that Palisade is 1,000 miles from an ocean, 4,700 feet above sea level, and somehow manages to grow grapes. In fact, according to the Museums of Western Colorado website, it's the only place with this distinction.

Now, there are more than two dozen wineries in the town. Garfield Estates Winery belongs to Dee Barratt, her husband and her daughter, who are from Massachusetts.

"We wanted something to do when we retired," Barratt said. "California was crazy, out of reach money-wise. And we went online and found this place, and fell in love with Palisade and the area."

Credit: Allison Sylte, KUSA
Grapes on a vine outside Garfield Estates in Palisade.

Barratt concedes that owning a winery is something of a dream job for a lot of people, but wants people to know it's hard work ... kind of the opposite of what being retired is typically described as.

"There's always something to do," she said, describing how her family spends the month of March pruning, all-year weeding the 11-acre vineyard and multiple weekends a year at wine festivals across the country. "Everyone says this is a dream job until you do the work, and then they're like, 'Wait a minute.'"

Credit: Allison Sylte, KUSA
Garfield Estates is on the other side of I-70 from Mt. Garfield in Palisade, Colorado.

Barratt's husband has a chemistry degree, and read everything he could about wine to make owning a vineyard possible. Their daughter is a biochemist and has a certification in winemaking. (She's the one who actually makes the wine.)

"Having that first bottle of wine we made ourselves, that was a pretty big moment," she said.

Credit: Courtesy Scott Winans
A view from the top of what will become the Palisade Plunge.

The Palisade Plunge is an idea that Scott Winans — the president of the Colorado Plateau Mountain Bike Trail Association — and other advocates in the area have tossed around for a decade. Now, thanks to work from multiple government agencies and a receptive community, this 33.7-mile trail that descends 6,000 feet from the top of Grand Mesa right into the town of Palisade is close to becoming very, very real.

And unlike similar trails — like the Monarch Crest trail in Salida or the Whole Enchilada in Utah — Winans said this one drops hungry and thirsty mountain bikers right into a town that happens to have exactly what they need.

"It's good to see people starting to understand how recreation has such a burgeoning impact in our community, not just on quality of life, but on economy," Winans said.

A team of professional trail builders started boring singletrack into the forest in July. The plan is for the first half of the project to open as soon as early next year, Winans said, and the full Plunge could be open as soon as late-2020 or early-2021.

He said a fundraising effort that originally asked for $30,000 garnered more than $70,000 in donations — quite a bit of that money came from people who don't live in Colorado ... or even the United States.

"This trail is unique in that there are only a handful in the world that offer this kind of length — and this kind of descent," Winans said.

Winans, who co-owns a mountain bike shop in Fruita, said many businesses will likely shuttle mountain bike riders to the top of the Grand Mesa so they can begin their descent to the valley floor. It's worth mentioning that the trail won't just be open to bikes: Equestrians can use the first 18 miles of the trail, and hikers or trail runners can also brave all or part of it, though it doesn't have many resupply points.

Credit: Courtesy Scott Winans
A view of forested singletrack that will be part of the Palisade Plunge.

"We need to show off the opportunities for biking on this side of the valley," he said.

He wouldn't say who gets first dibs to ride the Palisade Plunge when the trail is finally complete, but Winans said there will likely be a big line.

"This is a trail I'll be riding year after year," he said.