One of the most romantic cities in the U.S. is in the heart of Northern Colorado

It’s Valentine’s Day, so we did Loveland for 9Neighborhoods. 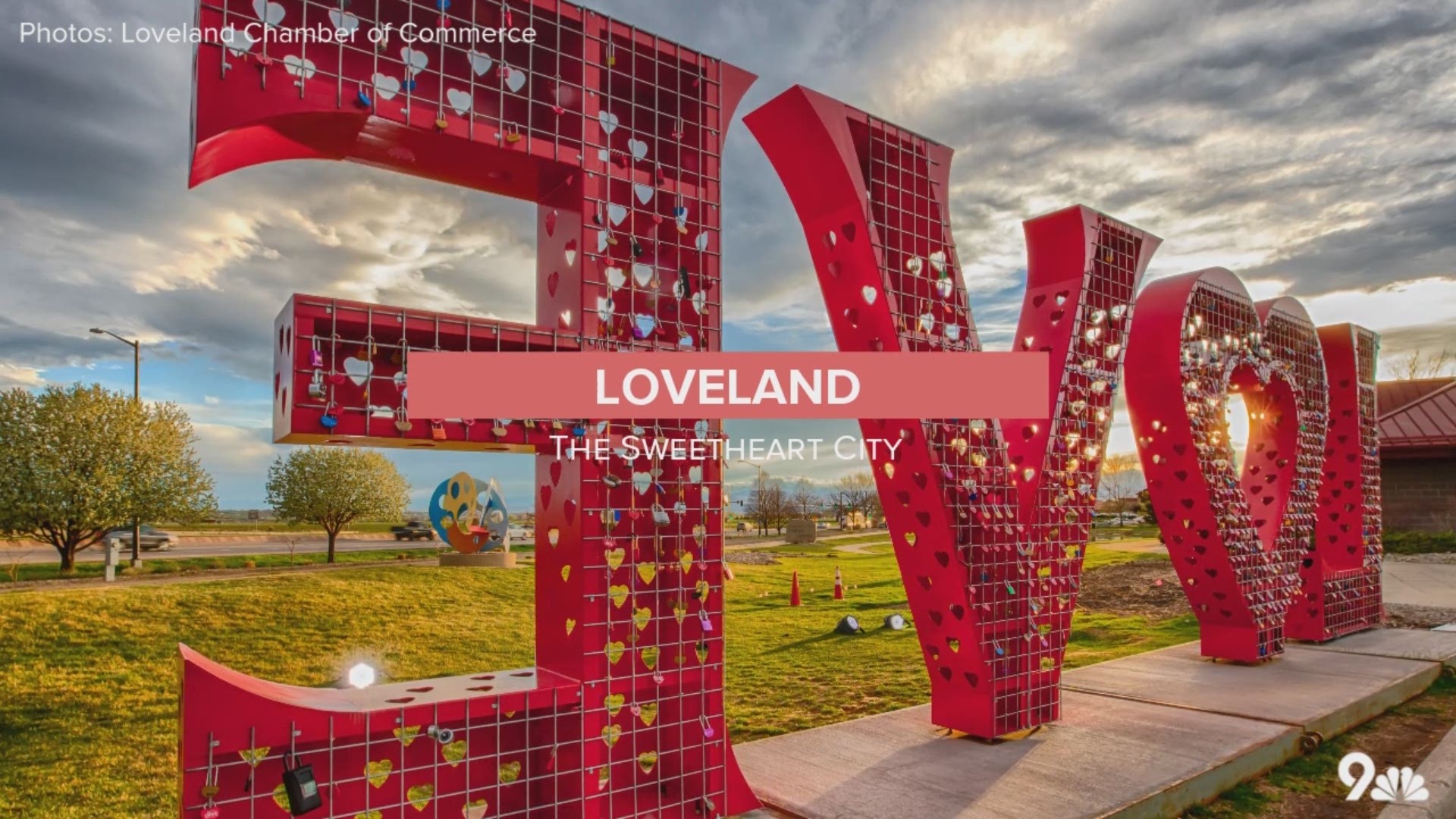 Every Valentine’s Day weekend, the city hosts a two-day Sweetheart Festival for lovers, families and romantics. The celebration of love features a group wedding, entertainment, food and other heart-themed decorations and art.

The unique event is only part of Loveland’s long history of embracing its reputation as a romantic city.

For more than 70 years, Loveland has been internationally known for its valentine remailing program, the largest of its kind.

Just taking a stroll or drive through the city around Valentine’s Day is enough to put even the most unsentimental person in a romantic mood.

Wooden hearts with personalized messages of love adorn light poles throughout town. A local rotary club sells the hearts, and local students help to paint the messages on them. That tradition has been going on for over 40 years.

Loveland is also home to one of the largest love lock sculptures in the United States.

A 10-foot-tall, 30-foot-wide, 24,000-pound sculpture spelling out the word "LOVE" was built at the Loveland Visitors Center in early 2019. Inspired by an ancient tradition, visitors can buy a lock, personalize it if they want, and then lock it to the sculpture to symbolize locking their love forever. This year, a second love lock sculpture was created and will be downtown through the Sweetheart festival.

Credit: Loveland Chamber of Commerce
Love locks on the original sculpture near the Visitor's Center

This story is part of our weekly 9Neighborhoods series, where we feature different towns and neighborhoods around Colorado. Join us this afternoon on Instagram.

While it’s a little outside of the Valentine’s Day theme, you can’t mention Loveland without mentioning its abundant art scene. The city hosts multiple world-class art shows and has two sculpture parks that cover 36 total acres.

RELATED: Whimsical sculpture at I-25 intersection to be taken down in Loveland

And it has a long history of agriculture and industrial production.

The birth and growth of Loveland

Loveland began like many of the other towns around our state: with the discovery of gold.

During Colorado’s Gold Rush in the 1850s, a group of explorers decided to establish a trapper’s camp in the Big Thompson Valley.

In 1877 the Colorado Central railroad was expanded from Longmont to Fort Collins and the settlements that existed relocated to be near the train tracks. This new settlement is what would become Loveland.

By 1878 downtown Loveland was starting to take shape and only three years later the town’s 51 residents voted to officially incorporate.

Credit: Denver Public Library
A group of men pose on the sidewalk in front of the Bank of Loveland, established in 1882

Since the railroad was the reason for Loveland’s existence, activity centered around the tracks. A general store, meat market, grocery store, hotel, livery, blacksmith shop and doctor soon lined the 4th Street corridor. This would remain the center of economic activity in Loveland for nearly a century.

Loveland remained dependent on agriculture for the first half of the 20th century. Sugar beets and sour cherries provided the area’s primary crops and by the 1920s, the Spring Glade orchard in Loveland was the largest cherry orchard west of the Mississippi. They would produce in excess of $1 million worth of cherries every year until they closed. The Loveland Cherry Company, located on US 34, is still a favorite for visitors and locals to grab cherry pie, juice, jellies and other desserts.

Credit: KUSA
Just outside of the city limits, on the road up to Rocky Mountain National Park the Colorado Cherry Company is nod to the area’s agricultural beginnings.

In the 1970s, large shopping centers began moving into the area. They were built closer to the highways, away from the original downtown area. Local businesses struggled to compete with department stores that could offer more choices and cheaper prices. The 4th Street business district fell into a state of neglect.

Interest in downtown Loveland perked back up in the 1990s and many of the original buildings were updated and restored. Thanks in part to a redevelopment project led by the city, businesses began moving back into the area. Today, it remains a busy hub of popular dining and shopping.

On Friday and Saturday, the streets of downtown Loveland will be taken over by hearts and valentines.

The festivities kick off with a group wedding at 4:30 p.m. where couples can say “I do” or renew their vows. The ceremony will feature music and readings, candles, photos and cupcakes.

Couples who want to feel a little romantic can add their love lock to the sculpture (bring your own or buy one at the festival for $20), wander through the “tunnel of love,” watch a light show and take pictures by ice heart sculptures.

Athletic couples are invited to sign up for a 4-mile run taking place Saturday afternoon.

There will also be live music and other entertainment both days.

Children can participate in a multitude of games and activities like face painting, a ring toss, a hockey shoot booth, crafts and more.

Food and treats will be available from food trucks, in the Palace of Sweets and from a beer and wine garden. There’s even a signature wine, beer and coffee that were created specifically for the event this year.

With love from Loveland

Every year, thousands of people send Valentine’s Day cards through the Loveland remailing program. Through its remailing program, volunteers stamp more than 120,000 cards with a special poem before they head out to their final destinations in all 50 states and 110 countries.

The city also creates an official Loveland Valentine card each year. Residents submit their designs for the card and the chamber of commerce combines a few of the best to create the card.

The program is run completely by volunteers who spend weeks stamping the cards. Prospective stampers can spend years on the waiting list.

For the two weeks leading up to Valentine’s Day, about 60 volunteer stampers spend hours in the Loveland Chamber of Commerce building hand-stamping each card. Local artists also often stop by to provide entertainment and add to the spirit.

If you want to get your valentine stamped next year (it’s too late for this year, obviously) just follow these instructions:

Each year, cards will start being postmarked and mailed on Feb. 7.