Why is there a stuffed animal in a gem at the Denver Museum of Nature and Science?

A 9News investigation uncovered the story of the stuffed critter, which began with a mysterious shipment from South America. 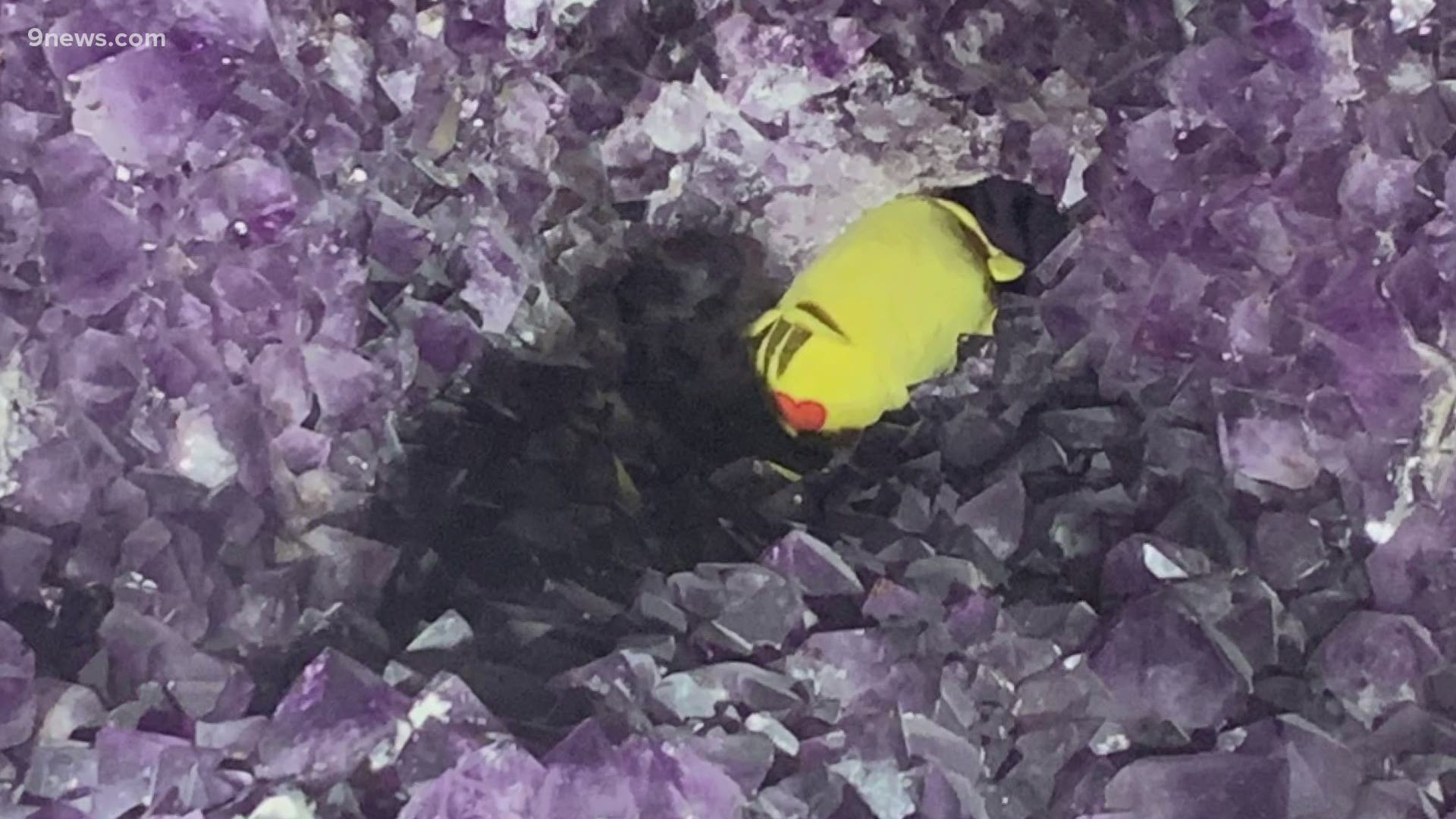 DENVER — A trip to the Denver Museum of Nature and Science  (DMNS) is not complete without looking at the gorgeous rocks in the gems and minerals exhibit and wondering what it would be like to find your own treasure on one of Colorado’s high peaks.

What's really comforting is that some aspects of the exhibit – like the mineshaft entrance and re-creation of the diamond-filled cave in Mexico – haven't changed much since this author started visiting the museum in the 1990s.

> Video above: An inside look at the new Space Odyssey exhibit at the Denver Museum of Nature and Science.

However, there was one thing that was very different during my trip to the museum on Sunday afternoon: a stuffed animal seemed to have found a home inside an amethyst that was very prominently on display.

A quick note: an earlier version of this article said it was a Pikachu, but thanks to an eagle-eyed 11-year-old Pokemon expert named Hunter, I have modified the story to say it's a stuffed animal. He says it's a cat emoji with heart eyes. I regret the error.

Anyway, there are photos of the creature below:

Credit: Allison Sylte, KUSA
A mysterious Pikachu at the Denver Museum of Nature and Science.

Luckily, a big part of my job involves asking dumb questions, so I launched a 9NEWS.com Wants to Know investigation into the unexpected what actually isn't a Pokemon placement.

This involved sending an email to Maura O’Neal, a spokesperson for the museum, whom I assumed would have an answer because one would reason that the gems and minerals display probably has security cameras.

While I was worried that I would out an employee pulling an innocent prank and maybe get them in trouble, the good news was that security cameras weren't needed to solve this mystery.

The origins of the stuffed animal trace back to a mystery delivery from South America.

O'Neal said the amethyst arrived to the museum from a port in Monte Video, Uruguay. There was no return address, and it was stored in a fancy hardwood crate.

Inside was this beautiful purple specimen but no information about where it came from or who had sent it to the museum. It had likely been damaged in transit and had a hole in the bottom.

O’Neal said that Jack Murphy, a former curator for the museum, was unable to put it on display because of the lack of information, so he catalogued it and left it in a storage area.

A few years later, Murphy spoke to a trustee at a gathering who mentioned a “package” that had been sent to the museum, O’Neal said. It turned out to be the amethyst in question, which was from Brazil.

This information allowed the museum put it on display, and the hole in the bottom turned out to be an opportunity for a little fun.

Over time, curators and staff have added “friends” to the exhibit, and it’s also been used for several wedding proposals, O’Neal said.

So the mystery of the stuffed animal has been solved, and this isn't the only example of the museum having a little fun.

For instance, have you ever seen the elves? Next time you're looking at the dioramas, keep an eye out for the gnomes left behind by one of the painters.

What was with the Poke Ball on the 9NEWS weather map? An investigation

What do the March 2003 blizzard and this snowstorm have in common? Cher