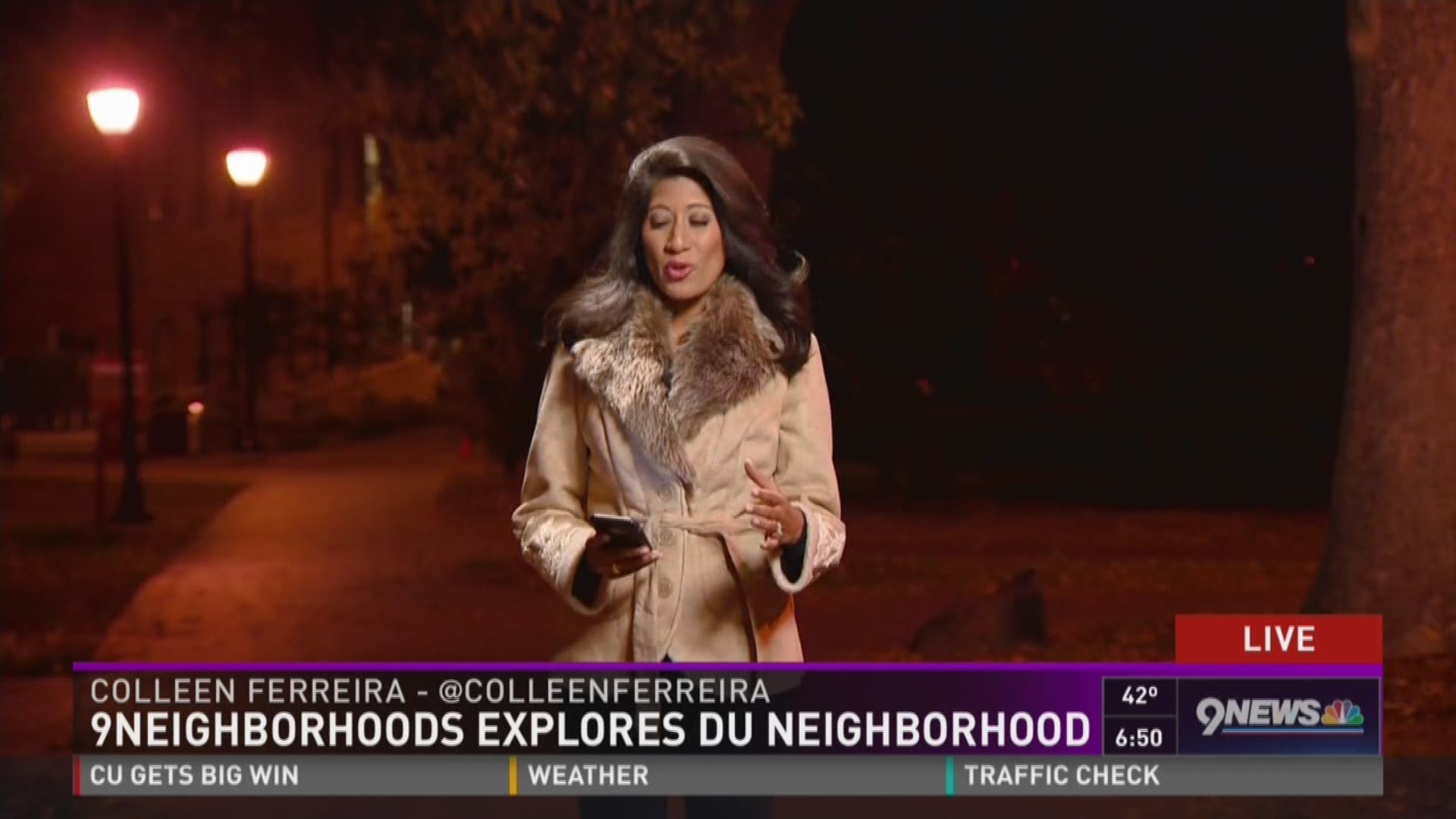 As noted by the name, the neighborhood's biggest claim to fame is the fact that it houses the University of Denver's sprawling, 125-acre campus.

Founded in 1864, DU is a private institution known for giving its students a unique blend of urban living combined with a traditional education.

But, the neighborhood is also home to eclectic eateries, local coffee shops, dive bars, and of course, a brewery.

Join us Friday as we take a walking tour on Instagram of the University neighborhood.

Much of the area known today as "DU" or University neighborhood was incorporated in 1886 as the town of South Denver. It sits adjacent to the University Park neighborhood and their history is entwined.

The town was originally formed to restrict the creation of more saloons and road houses in the city proper, which were seen as a threat to the residential areas. It was annexed to the city of Denver in 1894.

The University of Denver began as Colorado Seminary: founded in 1864 by John Evans, governor of the Colorado Territory and close friend of Abraham Lincoln, as well as the namesake for Mount Evans (14,264 feet in elevation).

After the fall of the economy when Denver's gold rush turned instead into a panic, the school closed briefly. It was reopened in 1880 as the University of Denver under Chancellor David Hastings Moore in downtown. The first graduate of DU got his diploma in 1884.

The University's College of Business was among one of the first to open in the country in 1908, and is still top-ranked in the nation.

Today's location of DU was built on land donated by Rufus "Potato" Clark, a reformed alcoholic and potato farmer. His offer of land for the University was laden with conditions such as the planting of trees and the laying out of a street grid. He also demanded that no alcohol ever be made or sold in the area.

Today, you will still find some home mortgages in south Denver with old covenants against producing or selling alcohol on the premises.

Clark became rich selling his potatoes, earning $30,000 in just one year! He was a philanthropic man, sending most of his potato crop to Chicago after the great fire, and also building a college in Africa.

He is also rumored to have owned 160 acres of what is now the Highlands Ranch Golf Club.

After World War II, as enrollment spiked at DU thanks to the GI Bill, residences were built rapidly and the area continued to grow with both students and families.

The University of Denver

DU in October celebrated the opening of its $60 million STEM facility, a five-story, state-of-the-art building that will house the university's science, technology, engineering and math programs.

PHOTOS: The University of Denver in fall colors

Meanwhile, DU also this year officially finished the overhaul of its Colorado Women's College program, a controversial subject that in 2015 pitted university officials and Women's College alumnae against one another as alumnae banded together to try and keep the college open.

The campus is also a beautiful mix of modern and old architecture, with University Hall constructed in the 1890s. The entire campus is designated as an arboretum.

The oldest building on campus, the Evans Chapel, was actually moved from West 13th Avenue and Bannock Street in 1960.

Built in 1878, the Evans Chapel (formerly Grace Methodist Church), is a designated Denver Landmark and is also listed on the National Register of Historic Landmarks.

Outside of the DU campus, the surrounding neighborhood includes a healthy mix of small, rentable homes often occupied by college students, sororities and fraternities, as well as higher-end homes with an average price of $504,137, according to real estate listings service REColorado.

The area's homes run the gamut: everything from new, contemporary townhomes and duplexes, to old apartment buildings and condos, to classic frame-and-siding and brick bungalows.

The neighborhood's high home costs are reflective of much of the growth in the city — the closer the home is to Denver's urban core, the higher the home price. But, the neighborhood's offerings also tell the tale of what makes it an attractive place to live.

1 / 28
<p>Crimson and Gold Tavern is a college-budget friendly bar, offering options for late-night or early-evening drinking.</p>

Grab a melted cheese-and-shaved-beef classic at South Philly Cheese Steak at 2070 S. University Blvd, or head to Mustard's Last Stand at 2080 S. University Blvd. for a hotdog that comes compete with that old-school, counter-serve feel.

La Belle Rosette, a family-operated coffeehouse at 2423 S. University Blvd., is a great little spot to sit back with a book and some espresso.

Another spot to check out it Fermaentra Brewery at 1715 Evans Ave., which offers unique brews like its Rozzer, a Southern English Brown, and Redolent, a crisp Belgian Blonde. Fermaentra is also known to have a different food truck parked outside for pretty much every day of the week.

Asbury Provisions, with 25 beers on tap, is also a great spot for beer-lovers. The restaurant, located at 2043 S. University Blvd., also serves sandwiches and hand-crafted cocktails.

The neighborhood also has a couple parks great for families, such as DeBoer, which links to the Harvard Gulch Trail, a scenic place to ride a bike or go for a jog.