The oldest-running Winter Carnival in the western U.S. will be in Colorado this weekend

Kids being pulled on skis behind horses, the ‘Lighted Man’ shooting fireworks off his suit: it’s all part of the tradition at Steamboat’s annual celebration of winter and western heritage.

STEAMBOAT SPRINGS, Colo. — Being a little off the beaten path has kept Steamboat Springs a little more laid back than a typical Colorado ski resort town.

While it’s not as busy as the many resorts along the I-70 corridor, Steamboat attracts year-round visitors. Many come to enjoy the abundant outdoor activities or attend one of the city’s premier annual events.

This story is part of our weekly 9Neighborhoods series, where we find out what makes different towns and neighborhoods around our state unique. Follow our Instagram Friday afternoon for a photo tour of Steamboat.

The area that would eventually become Steamboat Springs was homesteaded in 1875 by pioneer James Crawford and his family.

Before that, the remote area of northwest Colorado was used primarily as a summer hunting ground by Ute tribes and by fur traders.

When Crawford arrived, the region was still extremely remote. However, a handful of homesteaders followed, raising cattle, establishing businesses and working in nearby mines.

In 1908, the railroad arrived cutting off the small town’s isolation. The line, which ran across the Continental Divide to Denver, allowed livestock, coal and travelers to be transported to the region, allowing more rapid growth.

By 1913, the depot in Steamboat was the largest cattle shipping center in the county.

Howelsen Hill also opened in 1915, bringing skiing to the town.

Credit: Denver Public Library
View of a ski jumper taking off from the platform at Howelsen Hill, Steamboat Springs (1916 - 1923)

The ski area features 12 miles of Nordic trails, 17 alpine runs and a world-renowned ski jumping complex. Now owned and managed by the City of Steamboat Springs, Howelsen Hill is Colorado’s oldest continuously operated ski area, according to the city.

For the last 106 years, Steamboat has hosted a one-of-a-kind winter festival that pays homage to the town’s western heritage and winter sport tradition.

The Steamboat Winter Carnival began in 1914.

At that time, the town thought hosting a festival would be a way to help residents cope with restlessness from a harsh, long winter. The Steamboat Springs Winter Sports Club, now one of the oldest winter sports clubs in the United States, was founded to help organize the event.

In 1927, the club merged with the current men’s and woman’s ski clubs in the town and is now an educational non-profit that offers athletic training and sports programs for children, and continues to run the Carnival each winter.

The Steamboat Springs Winter Sports Club has also produced 95 Olympic athletes who collectively won 16 medals, five of them gold. According the club, that is the most Winter Olympic athletes from one club in North America.

During the first year of Steamboat’s Winter Carnival, there were a handful of ski jumping and cross-country races. By the second year, street events were added and the first night show came in 1936.

Credit: Denver Public Library
Spectators gather along the sidewalk of Main Street during a skiijoring contest at the Ski Carnival in Steamboat Spring (1945 - 1949)

Saturday and Sunday, 400 tons of stockpiled snow are used to bury Lincoln Avenue in downtown Steamboat. Hundreds of people line the street to watch children on skies or snowboards pulled by horses down the snow-covered street. There are also some non-horse events and an adult shovel race.

The weekend’s crowning celebration is a night extravaganza on Saturday. Entertainment includes a winter sports exhibition with the participants let by flares and LEDs and the famous Lighted Man skiing down Howelsen Hill while shooting fireworks off his suit. The night ends with a fireworks show including an attempt to break a world record by detonating the largest aerial firework in the world. 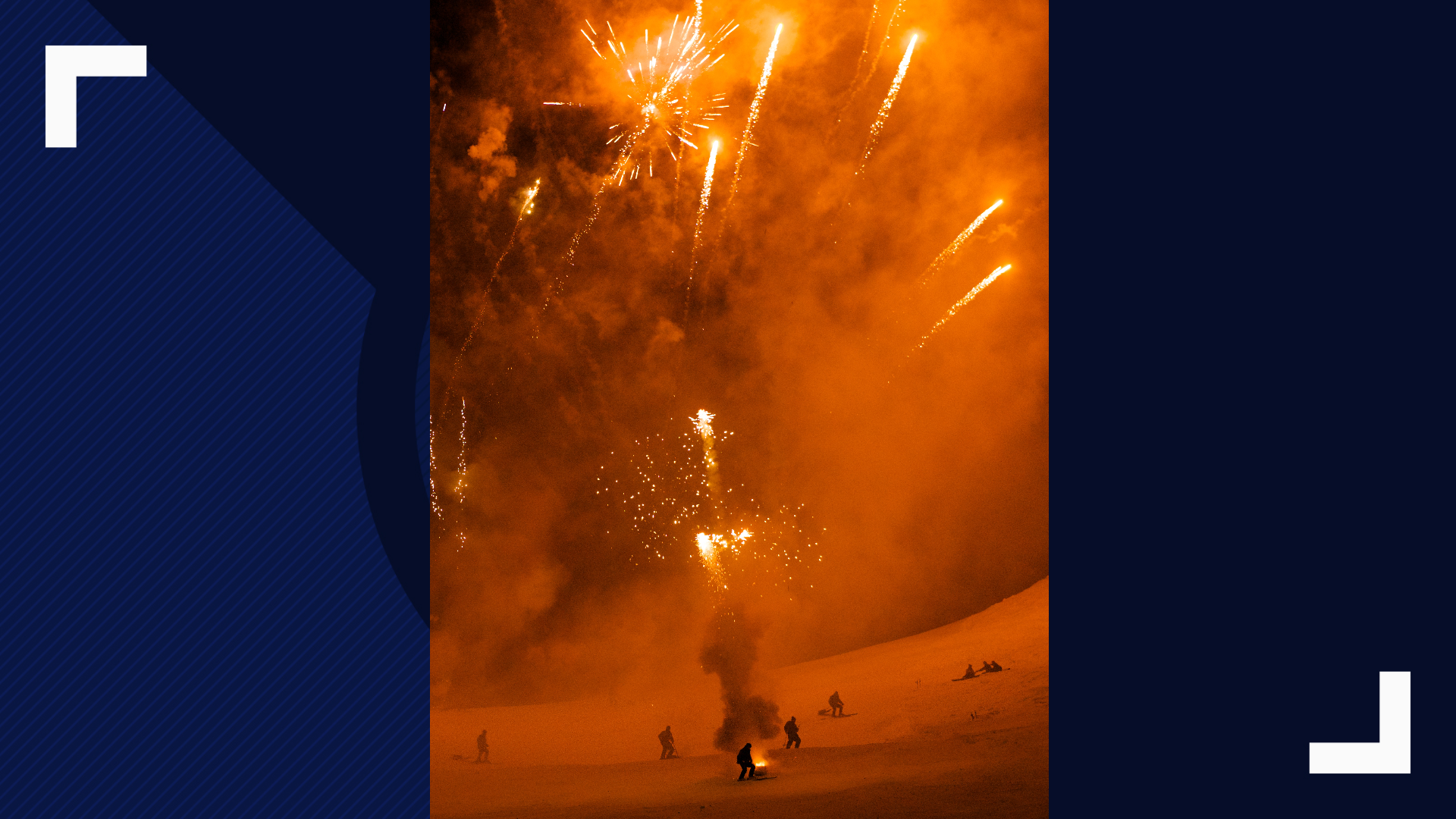 A ticket, which is $10, is required for all events. Once purchased, the ticket is good for the full weekend and includes skiing at Howelsen Hill during the Carnival.

RELATED: 9Things to do in Colorado this weekend: February 8-10

While you’re in town

If you’re intrigued and considered a trip to Steamboat Springs, the city has almost 250 shops, more than 100 restaurants and a myriad of activities to keep visitors busy year-round.

Besides the historic but small Howelsen Hill ski area mentioned above, the Steamboat Ski Resort boasts 18 lifts and 165 trails over nearly 3,000 skiable acres.

The Steamboat ski area is one of 23 North American ski resorts that purchasers of Alterra Mountain Company's new Ikon Pass will have access to once sales begin.

RELATED: A taco-serving snowcat is coming to Steamboat Springs this ski season

One of the most beautiful and popular sites just outside town in the 280-foot Fish Creek Falls. When the falls freeze in the winter, they become a playground for ice climbers. It also a stunning and relatively easy place for snowshoeing.

Credit: Carly P. via Yelp
Fish Creek Falls located just outside Steamboat Springs is a popular spot for hiking, snowshoeing and ice climbing in the winter.

After a day playing in the snow, Steamboat has two hot springs to relax and warm up. The Old Town Hot Springs, located in town, is an elaborate, family-friendly pool complex with waterslides, and climbing wall and plenty of room to soak. The more rustic Strawberry Park Hot Springs has natural hot pools with varying temperatures about 15 minutes from town.

Steamboat’s culinary scene is surprisingly esteemed and diverse for a town of its size.

Laundry, an award-winning gastropub, serves small plates in the historic Steamboat Laundry building. Rootz is a highly-rated café serving vegan, vegetarian and gluten-free fare. Aurum is well-known for its elegant dishes and meat sourced from local ranchers. And don’t miss a cinnamon roll from Winona’s.

You can also grab a locally-brewed beer at one of four breweries in town, or stop at BARley, a local-favorite hangout with 30 rotating taps.

Check out the other neighborhoods and towns we have featured: