'The Switzerland of America:' A Colorado town with stunning sights, rich history

Affectionately known as “The Switzerland of America,” Ouray is a gorgeous and one-of-a-kind Colorado mountain town nestled in the San Juan Mountains in the southwestern part of Colorado. 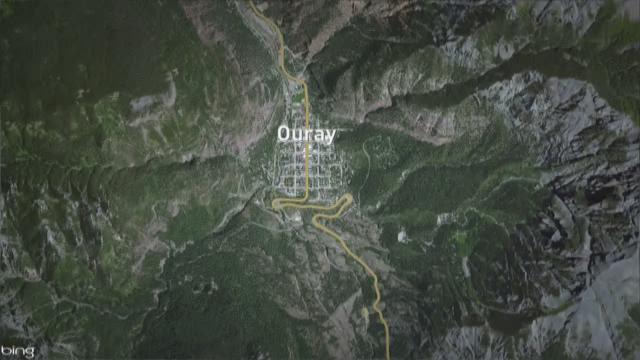 OURAY, Colo. — Editor's Note: While traveling more than 10 miles away from home is barred under Colorado's safer-at-home order, we're bringing back previous 9Neighborhoods articles to highlight the incredible places that will still exist in Colorado when we can once again explore our beautiful state. This story was originally published in 2017.

Affectionately known as “The Switzerland of America,” Ouray is a gorgeous and one-of-a-kind Colorado mountain town nestled in the San Juan Mountains in the southwestern part of Colorado.

About 335 miles (a 5 hour, 30 minute drive) from Denver, the town is filled with small boutiques, quaint restaurants and charming shops sitting against the backdrop of the stunning San Juan Mountain Range on all sides.

And with Ouray's wide range of outdoor sights and activities, it has always been a popular destination.

A photo tour of Ouray

1 / 34
KUSA
Ouray is a one-of-a-kind Colorado mountain town nestled in the San Juan Mountains in the southwestern part of Colorado. Named after Ute Indian Chief Ouray, it was first established as a mining camp in 1877.

The town of Ouray is named after an Ute Indian Chief, Chief Ouray. Ouray was raised in the Taos Valley but moved to Colorado when he was 17. He became the chief of the Uncompahgre Ute Tribe when he was only 35.

During his time leading the tribe, white people were fighting for gold, silver and land in the same area where the Utes lived, and Ouray became known nationwide for his diplomacy in dealing with the U.S. government and protecting his people while valuing peace. Chief Ouray died in 1880 and was highly respected by both Native American tribes throughout the country as well as by the government officials he dealt with throughout his life.

The town of Ouray was first established as a mining camp around 1877. The first prospectors arrived in the area in 1875 and found gold veins just south of the current town. Ouray was officially incorporated on Oct. 2, 1876, and one year later, about 1,000 people had moved there. Soon, ore mining in the surrounding hills had also taken off, and Ouray was becoming the central shipping and logistics center for the region.

RELATED: These are some of the best places to see wildflowers in Colorado

Through this time, however, Ouray remained relatively inaccessible. But in September 1882, the Denver and Rio Grand Railway was built through the Black Canyon of the Gunnison and reached Montrose, just north of Ouray.

However, it would take another five years for the line to extend the rest of the way into the town. Finally, in December 1887, the railroad arrived in Ouray and the first narrow gouge tours began in 1888.

Around the same time, in 1887, the Beaumont Hotel opened in Ouray, attracting a new clientele to the area. Designed after the Brown Palace in Denver, the elegant hotel was known as the finest in Western Colorado. During its heyday, guests like Sarah Bernhardt, Herbert Hoover and Theodore Roosevelt traveled to Ouray to stay at the Beaumont.

This would be the start of a huge tourism boom in the area.

Though the hot springs in Ouray had been used since at least the 14th century by both the Ute Indians and miners, construction on an actual hot springs pool began in the town in the 1920s.

Mineral water from Box Canyon that reaches temperatures from 80 to 150 degrees was fed by gravity into the pool on the south end of the town. The pool opened on July 4, 1927, and one of the largest crowds in Ouray's history attended the opening. The pool has been in operation ever since, and was completely renovated for the first time since that original construction last winter.

Today, the entirety of Main Street in Ouray is registered as a National Historic District with most of the buildings dating back to the late 1800s. A detailed walking tour provided by Ouray Chamber Resort Association as well as interpretive signs along the street explain the history and architectural details of many of these buildings.

Much of the tourism that sustains Ouray's economy is connected to the stunning mountain peaks that surround the town.

People come from all over to enjoy scenic byways, natural hot springs, back roads perfect for four-wheeling, historic wagon trails, museums, lakes for fly fishing, ghost towns and miles of beautiful hiking trails, including the 10-mile perimeter trail that wraps all the way around the town and can be exited and entered from Ouray's Main Street with a half-mile walk.

And perhaps one of the most impressive parts of Ouray are its waterfalls. There are several along the 10-mile perimeter loop, as well as two main ones at Box Canyon Park and Cascade Falls.

Box Canyon Park is located right on the end of town. For $4, you gain entry to the park, which has a long staircase you ascend to get to the falls. From there, you'll be rewarded with the crushing sound and look of the waterfall, which spills thousands of gallons of water a minute into the rushing river below.

To get to Cascade Falls, located at the east end of 8th Avenue, take a short, quarter-mile hike up toward the mountain range. Turn the corner and you'll immediately see the stunning waterfall crashing over the rock wall — another stunning Ouray sight to behold (Cascade Falls can also be seen from several vantage points across the city, so you're likely to catch a glimpse whether you have time to go or not).

Ever wondered what it was like to be a miner? Check out the Bachelor Syracuse Mine Tour, about a mile outside of town. Tour guides will take you deep into an actual mine and help you understand just how tough it was to be a miner at the turn of the 20th century.

If you're willing to make a bit of a drive (and have a four-wheel drive vehicle), the Animas Forks ghost town is more than worth it. Located about 12 miles northeast of Silverton, Animas Forks is one of Colorado's most intact ghost towns, with many of its buildings reinforced and still standing. It was founded in 1877 as a mining town, and today has a very eerie feel to it complete with breathtaking views of the mountains and valleys around it.

Just outside of Ouray are some of the most stunning drives in the state. The Million Dollar Highway, which connects Ouray to Silverton, winds drivers over hairpin turns and steep embankments as it climbs up and over Red Mountain Pass. Between mid-July and mid-August, fields of brightly-colored wildflowers line the valleys along the route.

The Million Dollar Highway is the most popular portion of the longer San Juan Scenic Byway, a 236-mile loop through much of southwest Colorado. Off the byway are some of the more popular jeep trails including Yankee Boy Basin and the Alpine Loop, both especially popular during the wildflower bloom.

If none of that sounds appealing, Ouray is also popular for mountain biking, rock climbing, horseback riding, and one of the largest ice climbing festivals in the world.

Each winter, as the picturesque falls of Box Canyon freeze, the Uncompahgre Gorge is transformed into an ice climbing mecca. The vast ice walls attract about 15,000 ice climbers from around the world every year.

People have been ice climbing in Ouray for decades. However, creating manmade ice walls in the Uncompahgre Gorge began in the early 1980s and work on the official ice park began in 1991. Ouray Ice Park, Inc. was officially established in 1997.

And for the last 21 years, thousands of ice climbers have converged on the town for one of the largest ice climbing festivals in the world. The three-day, three-night Ouray Ice Festival includes equipment demos, vendor exhibitions, climbing clinics, free open climbing, evening presentations, silent auctions, parties and elite competitions.

Once you're done exploring the mountains, ghost towns or shopping, Ouray has plenty to offer in the food and drink department.

O'Brien's Pub & Grill has outdoor seating and is perfect for grabbing a beer and dinner, and Outlaw's (Ouray's oldest restaurant) is an eclectic steakhouse worth a visit.

If you're looking for a drink, Ouray Brewery has plenty of unique brews to offer, and even offers growlers to go. Another option is K.J. Wood Distillery, which makes Colorado whiskey and gin.