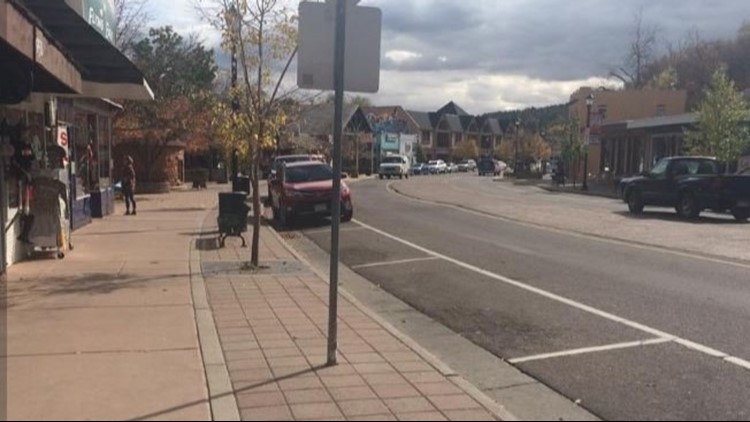 Photo by: Amanda Kesting, KUSA
A view of the main drag of Manitou Springs.

MANITOU SPRINGS, Colo. — With its natural spring water, eclectic shops, ghost stories and staircase from hell that some people walk up for fun, people have been seeking out this small Colorado town for well over a century.

We’re talking about Manitou Springs, which is six miles west of downtown Colorado Springs and right at the foot of Pikes Peak.

This quaint town has seen a resurgence following devastating flooding and mudslides in recent years – which is good, since tourism is its bread and butter.

This article is part of our weekly #9Neighborhoods tour. Join us on the 9NEWS Instagram starting at noon on Friday for a photo tour. Know somewhere else we should spotlight? Send us a note at webteam@9news.com! 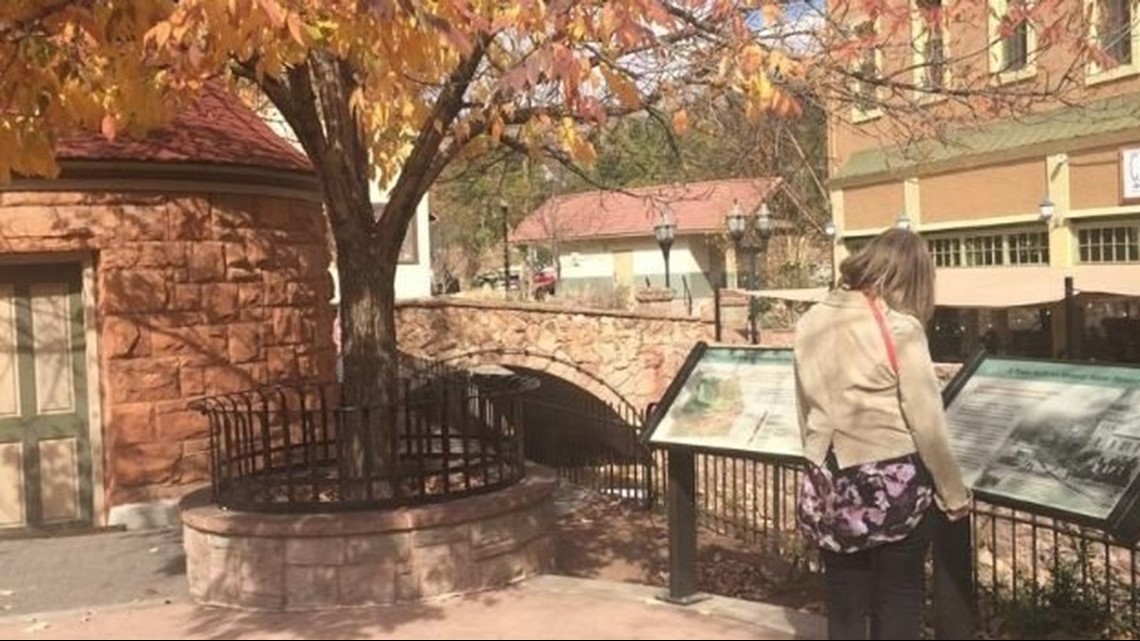 01 / 18
Bottling companies came in and started selling water from Manitou Springs across the state and country. Today, there are nine restored springs throughout the city.
02 / 18
A view of the main drag of Manitou Springs.
03 / 18
By 1891, people from all over the country were coming to Manitou Springs for the water, which supposedly had healing waters -- prompting developers to create a resort.
04 / 18
An old view of the Manitou Incline before it became fully legal.
05 / 18
The Pikes Peak Cog Railway has been closed for about a year due to necessary maintenance.
06 / 18
A look at some of the steps leading up the notorious Manitou Incline, which gains 2,000 feet in a mile.
07 / 18
Manitou's founder, Dr. William Bell, lived in Briarhurst Hanor in 1876 as a home for him and his new wife Cara. The beatiful Victorian home became the social center of town.
08 / 18
Cliff House is located at the base of Pikes Peak and has been in operation longer than Colorado has been a state.
09 / 18
The Bell's sold the Manor in 1890 but continued to visit in 1920. Today it's home to a full service retaurant and hosts weddings ando ther special events.
10 / 18
Mona's wine cellar serves fondue dinners and has a wine bar below the restaurant offering appetizers and drinks.
11 / 18
Miramont Castle was built in 1895 by Father Jean Baptiste Fancolon, a Catholic priest.
12 / 18
Legend has it that in 1929, several days after stormy weather, Emma Crawford's coffin washed up on Red Mountain and came racing into Manitou Springs.
13 / 18
This open air concession stand is known for its gourmet popcorn, salt-water taffy and homemade ice cream.
14 / 18
The Miramont Castle became a sanitarium, and was also privately owned before becoming the museum it is today.
15 / 18
The Stagecoach Inn serves classic American dishes with a western flair.
16 / 18
Part of larger Arcade Amusements -- a series of scattered buildings full of a variety of arcade games -- the Penny Arcade is a hidden gem in the heart of Manitou.
17 / 18
The Manitou Cliff Dwellings were constructed just outside of the heart of Manitou by preservationists starting in 1904. The stone work came from the Four Corners region and was moved to Manitou as it started to crumble.
18 / 18
A view of downtown Manitou Springs.

The history of Manitou is tied to its natural mineral spring water.

The tribes who first occupied the land prayed to the great spirit Manitou, believing the healing and spiritual powers of the water were a sacred gift.

By 1871, people from all over were coming to Manitou for the healing waters, so developers created a resort to provide water therapies.

Cliff House is located at the base of Pikes Peak and has been in operation longer than Colorado has been a state.
Amanda Kesting, KUSA

The town became known as the “Saratoga of the West” and bathhouses offered relaxing soaks while doctors prescribed drinking the water for some ailments. Most commonly, tuberculosis sufferers sought out the town for both its healing water and high, dry climate.

But the naturally carbonated water wasn’t just for the sick. A three-story bottling company was built in the center of the town so the water could be shipped throughout the country and the Town Clock was built to commemorate the opening of the plant. Soon other spring companies popped up throughout town.

Today, there are nine restored springs throughout the city, all with different mineral content leading to a slightly different flavor.

The Bell's sold the Manor in 1890 but continued to visit in 1920. Today it's home to a full service retaurant and hosts weddings ando ther special events.
Amanda Kesting, KUSA

The other main attraction that brought the first settlers to Manitou was the famous nearby mountain. Pikes Peak is 14,115 feet high and draws an estimated 600,000 people each year.

On June 30, 1891, the first cog-railway steam train climbed from Manitou to the summit of Pikes Peak. That first trip carried a church choir from Denver.

Then, in 1907, a mile-long cable car was built from Manitou part way up the mountain. It was originally to help transport supplies while a hydroelectric plant was built, but it eventually became a tourist attraction.

Tourists could take the 16-minute ride that claimed to be the “longest and highest incline on the globe.”

It became hugely popular, except frequent rockslides made maintenance difficult and expensive.

Finally, in 1990 a rockslide damaged the tracks enough it was forced to close and the operators were able to focus on the even more popular cog railway.

An old view of the Manitou Incline before it became fully legal.
Amanda Kesting, KUSA

Over time, the railway had transitioned from the original steam-powered train to gasoline and diesel powered locomotives to self-contained diesel-electric cog cars to the Swiss-made railcars used for 127 years.

The railway closed in last October for maintenance and has not reopened.

Once inspections started, there were more issues than just fixing the tracks like the owners at the Broadmoor Hotel expected. At last update, they were looking at costs and availability of parts to see whether or not it would be feasible to eventually reopen.

Oh, and that cable car? What’s left of the rail ties is now the infamous and popular Incline hiking trail that gains nearly 2,000 feet of elevation in just under a mile.

A trip to Manitou isn’t complete without hearing a little bit about the spirits that still roam its streets. Many of the buildings throughout the town are said to be haunted.

Located at the base of Pikes Peak, the Cliff House hotel has been in operation longer than Colorado has been a state. Originally known as "The Inn," the former 20-room boarding house once served as a stagecoach stop for trappers and hunters traveling between Colorado Springs and Leadville. Some of those guests are rumored to still roam the halls at night as guests have reported hearing footsteps and ghostly voices.

Manitou’s founder, Dr. William Bell, built the Briarhurst Manor in 1876 as a home for him and his new wife, Cara. The beautiful Victorian home became the social center of the town. It’s known as one of the most haunted buildings in the area with many guests reporting ghostly, but friendly, encounters.

The Miramont Castle became a sanitarium, and was also privately owned before becoming the museum it is today.
Amanda Kesting, KUSA

The Miramont Castle was built in 1895 by the Rev. Jean Baptiste Francolon, a Catholic priest. Serving as his own architect, Francolon incorporated everything he liked into the design of the castle. It ended up with nine difference architectural styles within its 14,000 square feet. It is said to be haunted by spirits from its days as a sanitarium run by the Sisters of Mercy.

But, perhaps Manitou’s most famous ghost story is that of Emma Crawford, who came to the town in 1889 for the healing mineral springs. She had tuberculosis and died on December 4, 1891.

Her dying wish was to be buried on top of Red Mountain, so her fiancé (an engineer on the Pikes Peak cog railway) and a group of men carried her body up the 7,200 foot slope to make that dream a reality.

Legend has it, in 1929, after several days of stormy weather her coffin was washed up and came racing down the mountain and into Manitou. Some say she still haunts Red Mountain.

To commemorate and honor the event, since 1995 residents and guests have participated in the Emma Crawford coffin races and festival each October. After a parade, teams of five race coffins down Manitou Avenue. This year’s race is scheduled for Saturday, Oct. 27.

You can also hear a lot more about Manitou’s haunted history by booking a spooky walking ghost tour with the Manitou Heritage Center.

Legend has it that in 1929, several days after stormy weather, Emma Crawford's coffin washed up on Red Mountain and came racing into Manitou Springs.
Amanda Kesting, KUSA

Manitou Springs is home to about 60 businesses, many of which cater to the people visiting from out of town.

The businesses are finally on an upward swing again after Manitou Springs was among the towns severely impacted by Colorado's record 2013 September floods, which displaced some 10,000 people in the cities of Boulder, Estes Park, Fort Collins, Greeley, Longmont, Loveland and Manitou Springs.

For shopping, the downtown Manitou Springs area is your friend: it has small boutiques like Metal Mama, a funky little shop that sells artwork and sculptures made of metal; Whickerbill Gifts & Provisions, a place to grab unique gifts and cookware; and Ruxton's Trading Post, housed in a historic building straddling Ruxton Creek. CK Comics is also a fun place to thumb through the classics and check out superhero collectibles.

Like cheese and wine? Try Cherokee's of Manitou. It has dozens of different cheeses for sale, as well as art and groceries, and also hosts "Sip and Paint" classes where patrons can drink wine, eat cheese and paint a mural. If you're into the "luck of the Irish," be sure to stop by The Leprechaun Shoppe, a specialty boutique for all things Emerald Isle.

For art and cultural aficionados, Manitou is the place to be. It has more than a dozen art galleries, jewelry shops and cultural centers. One place to go is the Manitou Art Center, which features local and national artists and has fun exhibits for children as well, and the Manitou Heritage Center, a place to learn about the history of the city and book a "spooky" walking ghost tour.

And now, for the food. Manitou Springs has no shortage of restaurants. For a romantic outing, check out Briarhurst Manor, named one of Colorado's seven "most romantic" restaurants. For an ethnic experience, head to the Sahara Café or Heart of Jerusalem Café, both offering traditional Middle Eastern food. Savelli's Pizza is a local favorite, as is the Cliff House Hotel Dining Room and Adam's Mountain Café.

Part of larger Arcade Amusements -- a series of scattered buildings full of a variety of arcade games -- the Penny Arcade is a hidden gem in the heart of Manitou.
Amanda Kesting, KUSA

There are also a few fun spots to grab a drink. For beer lovers, the Manitou Brewing Co. is a must-visit with its range of brews, such as the Manitou Common, Jibberish Rye Pale Ale or Burro Barn Brown. Swirl Wine Bar is also fun, serving beer, wine and specialty cocktails.

For playing, Manitou Springs activities are too numerous to count. Besides the many hiking trails nearby, the city has horseback riding, ziplines, swimming, train tours, rafting, gold panning, fishing, theaters and more.