You can actually afford to live in this Colorado town that mountain bikers have known about for years. 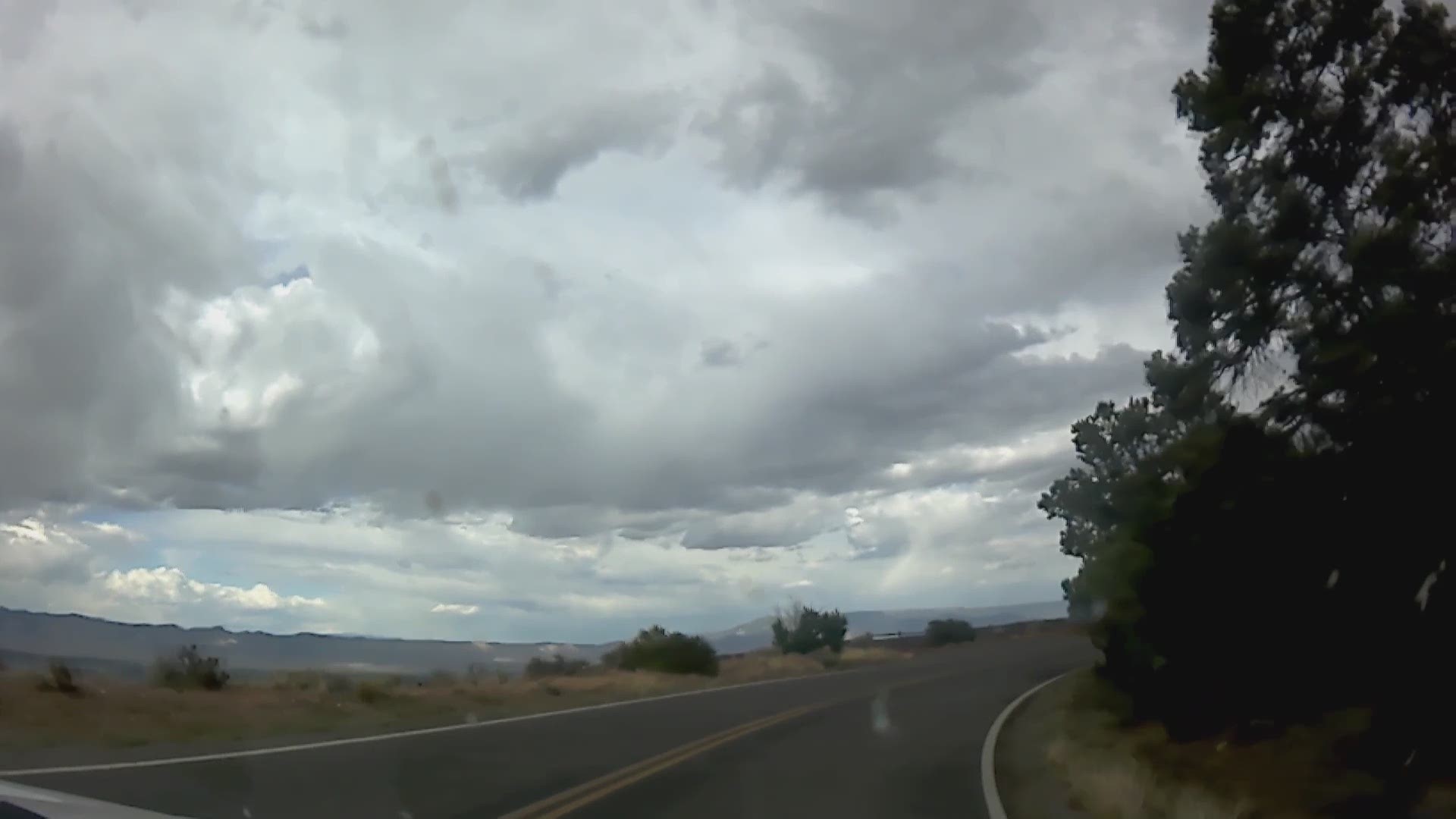 KUSA — I’ve been to Moab, Utah multiple times at this point – and let’s be real: it’s an amazing, borderline mystical place that rightfully has a reputation as THE outdoor destination in the country.

But, I’m pretty sure the only time I’ve been in Fruita before last year was to go to a liquor store ahead of crossing the Utah border (please don’t judge me). That’s a problem, and if you haven’t been to Fruita but love to mountain bike, hike, drink beer and just enjoy an incredible desert destination, you need to rectify that situation as soon as you have time to make the four-hour trip to the Western Slope.

Seriously: this Colorado town is an hour-and-a-half closer to Denver than Moab, but it has amazing trails with views of red rocks that rival the ones that draw millions to Utah, as well as access to one of the highest concentrations of rock arches outside of the national park with so many it’s named after them.

Also, there’s the Mike the Headless Chicken Festival happening this weekend, and that’s probably worth a visit just for the name alone.

The only danger of visiting Fruita? You might never want to leave … (don’t worry though: I’ve extensively researched the housing and jobs markets for work purposes, so keep reading).

Want to see more of what Fruita is all about? Join us on the 9NEWS Instagram starting at noon on Friday for our #9Neighborhoods tour!

Take a photo tour of Fruita

A lot of my knowledge of Fruita came in part from lurking in the 303 Trail Monitor Facebook group. And if you’re a fan of epic single track (regardless of your ability), then you should probably just call in “sick” like … now and head to one of the multiple trails within a stone’s throw from city limits.

Credit: Amanda Kesting, KUSA
The view of the incredible desert landscape from the Kokopelli Trail in Fruita.

One would be remiss to talk about mountain biking in Fruita without talking about the granddaddy of them all: the Kokopelli Trail, which takes mountain bikers from Loma to Moab.

But if you don’t have the time for a 150-mile bikepacking trip, there are plenty of shorter loops of varying difficulty from the trailhead on the other side of Fruita from Interstate 70.

These trails come with views of the red rocks of Colorado National Monument, as well as the unique geology of the desert surrounding Grand Junction.

Check out a map of the Kokopelli Loops here: https://bit.ly/2LMCnrK

I could wax poetic about the stoic, almost prehistoric beauty of a desolate desert landscape, but frankly, that’s probably not why you came to 9NEWS.com.

What I will say is that while a coworker and I were cruising down a dirt road to the trailhead for the 18 Road system, we couldn’t help but comment about how freaking cool the landscape was and how sad we were that we’d eventually have to drive four hours back to Denver.

This is in what’s called the North Fruita Desert, and these loops are a little bit more remote than others in the region. The Fruita town website cautions newer riders who are nervous about steep descents from checking out these trails, since walking could increase erosion.

But if you’re a confident mountain biker, it’s worth the drive down county roads with a strange decimal numbering system (think 17 5/10 Road).

Credit: Amanda Kesting, KUSA
A weird street sign on the way to the North Fruita Desert.

Check out a map of the loop here: https://bit.ly/2LcGgW1

And for more detailed trail reports, head to: https://bit.ly/2kCuIQw

These are just a couple of the riding options in Fruita. If you’re a mountain biker who wants detailed trip reports and more specific information, check out Singletracks.com: https://bit.ly/2sveMTN

Fruita might be legendary among the mountain biking community, but folks who prefer their feet over two wheels also have a lot to explore and love.

If you’re a trail runner, Fruita’s April trail running festival that includes a 10K, half marathon, marathon and 50k has been ranked one of the best in the country.

Super crazy folks can even run most of the Kokapelli Trail during the September ultramarathon that comes with a mountain bike race. But you don’t have to be what some would call crazy to explore the trails around Fruita.

To start, there’s the Black Ridge Canyons Wilderness, which has the second-highest concentration of natural rock arches in the country (other than Arches National Park, which is about an hour-and-a-half as well as millions of tourists away).

There are multiple trails of varying difficulty in this wilderness area, but one of the most famous is the Rattlesnake Arches trail, which takes visitors to multiple arches in about eight miles.

Colorado National Monument is also definitely worth a visit – and you can find trails here with varying degrees of difficulty. And if you’re strapped on time, you can see incredible views without leaving the main road and only steps away from the visitor center.

For something free, short but still super cool, check out the Fruita Paleo Area Trail. This is not far from the highway, and features interpretative signs that tell you about the dinosaurs that roamed this landscape a few million years ago: https://bit.ly/2xv4jxl

Credit: Amanda Kesting, KUSA
The Fruita Paleo Trail takes visitors back in time over the course of a .5 mile loop.

Equipped with this information, you might learn why everything in downtown Fruita feels like it’s either bicycle or dinosaur-themed.

This is the part where we tell you that if you’re going to hit these trails, you should be respectful and safe. What exactly does this mean? First off, leave no trace. No one wants to see your trash, dog’s poop or footprints where they don’t belong. Also, don’t be that guy carrying your speakers around on remote trails: your music is not as good as you think.

Second, this is the desert, and some trails could take you to remote places. That means carry a lot of water, do your research, and bring food and layers. Staying hydrated is key, and if you go into the backcountry unprepared, what happens next is no one’s fault but your own. Check the weather forecast before you head out, and always let someone know where you’re going and when you plan to be back.

If you don’t know what to bring or are new to this kind of thing, what’s known as the 10 Essentials is a good place to start: https://bit.ly/2Jikz9M.

Credit: Amanda Kesting, KUSA
A view of downtown Fruita, a hub for restaurants and breweries.

Camping is probably one of your best options – especially if you plan on hitting the trails and getting dirty anyway.

There are numerous campsites near the 18 Road area. This has a few dozen dispersed campsites with toilets and fire pits. The sites cost $10 a night.

You can also stay in nearby Highline Lake State Park, but if you want a site, reserve ahead. Check out information here: https://bit.ly/2J1ZrVE

James Robb State Park has 63 campsites that can accommodate everything from tents to trailers. This puts you close to the Colorado River: https://bit.ly/2LO8VSv

Let’s say though after a long day in the wilderness you want a shower. There are quite a few AirBNBs available in or around Fruita starting at $35 a night and going up to $375, depending on what you’re looking for. You can check those out here: https://bit.ly/2xtK2bB

Lastly, if you consider camping to be more along the lines of “staying in a hotel,” that’s also an option. There are quite a few chain hotels right off of I-70 and not too far from downtown, so you can have your wilderness experience and then sleep in an actual bed that comes with continental breakfast.

If you’re like me and consider physical activity to be a precursor to life’s other joys (I’m talking about nachos and beer), then Fruita is certainly a town that you can get behind.

There are two breweries right in downtown Fruita: Suds Brothers and Copper Club. The later has an amber ale that won a gold medal at the Great American Beer Festival and free pretzels.

Suds Brothers, meanwhile, has both beer and bar food.

It happens to have a mountain biker theme, which is very Fruita.

And just because it’s kind of funny, the Fruita Taco Bell happens to also be one of the top restaurants on TripAdvisor and even gets a mention on the town’s tourism website – proof that sometimes, even the hardiest outdoorsman (or woman) just needs a Cheesy Gordita Crunch and Baja Blast.

Credit: Amanda Kesting, KUSA
Mike the Headless Chicken's memory has not been forgotten in Fruita.

For 20 years, Fruita has held a festival “dedicated to the amazing story of one chicken’s will to live.” That’s beautiful if you really think about it.

Here’s some history: Back in 1945, Mike was a chicken who survived a beheading at the hands of a man who just wanted to feed his mother in law. However, when his owner saw he was still alive minus his head, he figured out how to feed this hardy little guy with an eye dropper.

It was later determined that most of Mike’s brain stem was intact despite his head being gone, allowing him to continue to live for a whirlwind 18-months that included traveling across the country as a sideshow. Mike was later valued at $10,000.

But tragedy struck when Mike began to choke in the middle of the night. The eyedropper used to clear his open esophagus was nowhere to be found, and this miracle chicken passed on to the other side.

His memory lives on with the festival in the heart of downtown Fruita. This includes a poultry show, 5K, games and music.

You can find the full schedule here: https://www.miketheheadlesschicken.org/mike

As someone who currently pays more money than I’d care to admit for a studio apartment in Denver, it was a wakeup call to see that buying a house in Fruita costs an average of $246,000, according to real estate website Trulia.com (median rent is $1,300 a month).

And through a look at Craigslist, it’s possible to rent a three-bedroom house in Fruita for $1,300. Let that sink in, folks who pay that to live in a box with no parking in Capitol Hill.

You can snag a one-bedroom townhome, meanwhile, for less than $800 a month.

And, if you’re cool with a little bit of a commute to Fruita’s mountain bike trails (as in less than 15 minutes), you can snag even cheaper places in the nearby “big” city: Grand Junction.

Of course, you probably can’t mountain bike and hike professionally, so you’ll probably have to get a job.

According to local data, the biggest industry in Fruita is healthcare, followed by retail and manufacturing. Mining is also big in this part of the state, and the median household income is $52,479.

There are plenty of job opportunities in nearby Grand Junction. According to the Grand Junction Economic Partnership, the top employers are the school district, Colorado Mesa University and the local government.

This story was part of the weekly #9Neighborhoods series. Know an area you'd like us to check out next? Email webteam@9news.com.