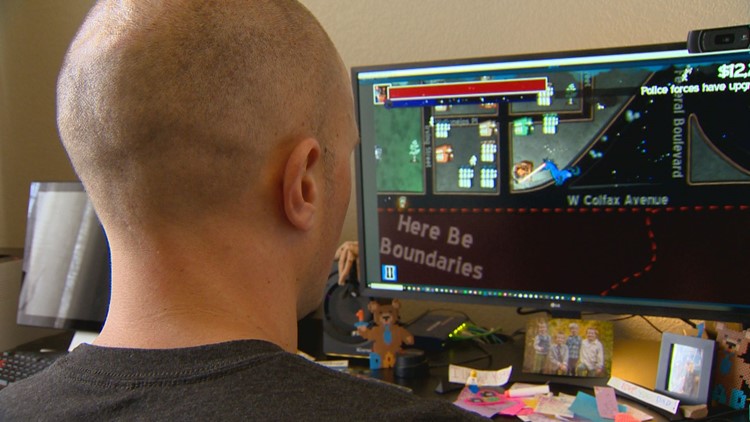 The mobile game "Blucifer: The Doom Horse of Denver" allows users to explore a map of Denver and see renderings of beautiful landmarks like Casa Bonita and the Cash Register building. Then, YOU GET TO DESTROY THEM.
Author: Allison Sylte
Published: 4:20 PM MST January 4, 2019
Updated: 10:36 AM MST January 7, 2019

In some imaginary worlds, the demon horse outside of Denver International Airport and the Colorado Convention Center’s Big Blue Bear might be best friends. They’re both blue. They’re both pieces of public art. It makes sense.

But in Ryan Seabury’s mobile game depicting a post-apocalyptic Denver being rampaged by Blucifer and his laser eyes, the two icons are at large. The demonic horse with those haunting red eyes is bent on destroying the Mile High City’s landmarks … and the Big Blue Bear wants to intervene and stop that destruction, albeit too late.

Seabury has been working on the game, called “Blucifer: The Doom Horse of Denver,” for some five years. He said it’s almost ready to be rolled out to the public. His kids are working on testing it out and working out some of the bugs.

“It’s kind of a twisted love letter to Denver,” Seabury said. “I get to explore Denver because I actually mapped out the city.”

This included creating his own illustrations of landmarks such as Coors Field, the Molly Brown House, Argonaut Liquors (no joke), and of course Casa Bonita. Users can explore the video via illustrated open source maps that showcase both the old school bungalow-style homes in the city, as well as those divisive slot homes.

But, since this is a video game, Seabury meticulously imagined these pieces of history just so they can be blown up.

“I kind of had a subversive goal of kind of showing you Denver and teaching you about the kind of places and landmarks that we have here,” the experienced video game developer and stay-at-home dad said. “Granted you get to destroy them, but it’s also teaching you where they are.”

As Blucifer goes on his rampage, more and more cops follow him and try to intervene. A priest might be present to save the souls of his victims. And then, there’s the grand finale.

“If you do enough damage, the big blue bear from the convention center comes to life and starts chasing you down,” Seabury said.

This isn’t Seabury’s first Colorado-specific game. Inspired by his son’s fascination with the runaway truck ramps on Interstate 70, he built Rush ‘Hower,” which basically involves skiing down the notoriously busy mountain stretch of highway in a semi-truck.

“As a player, that’s what intrigues me,” Seabury said. “It’s more, ‘Show me something I haven’t seen before in a game.’”

For the Blucifer game, Seabury said he’d love to expand it to other cities. Not just because he thinks people might get a kick out of it, but also so he can learn more about new places.

He said it will likely cost $2 on the Amazon, Google Play and iTunes app stores – which he admits is high for an independent game – but isn’t meant to be greedy.

A portion of the sales will go to a charity. In this case, he’s hoping to help DonorsChoose.org and give school supplies to Denver teachers.

“The more successful it is, I feel like I’m helping Denver and Colorado as well,” Seabury said.

To learn exactly when the game will be released, head to: blucifer.run