Green Mountain Falls is a 1.1-square mile town outside of Woodland Park. It was incorporated in 1890 as a summer getaway. 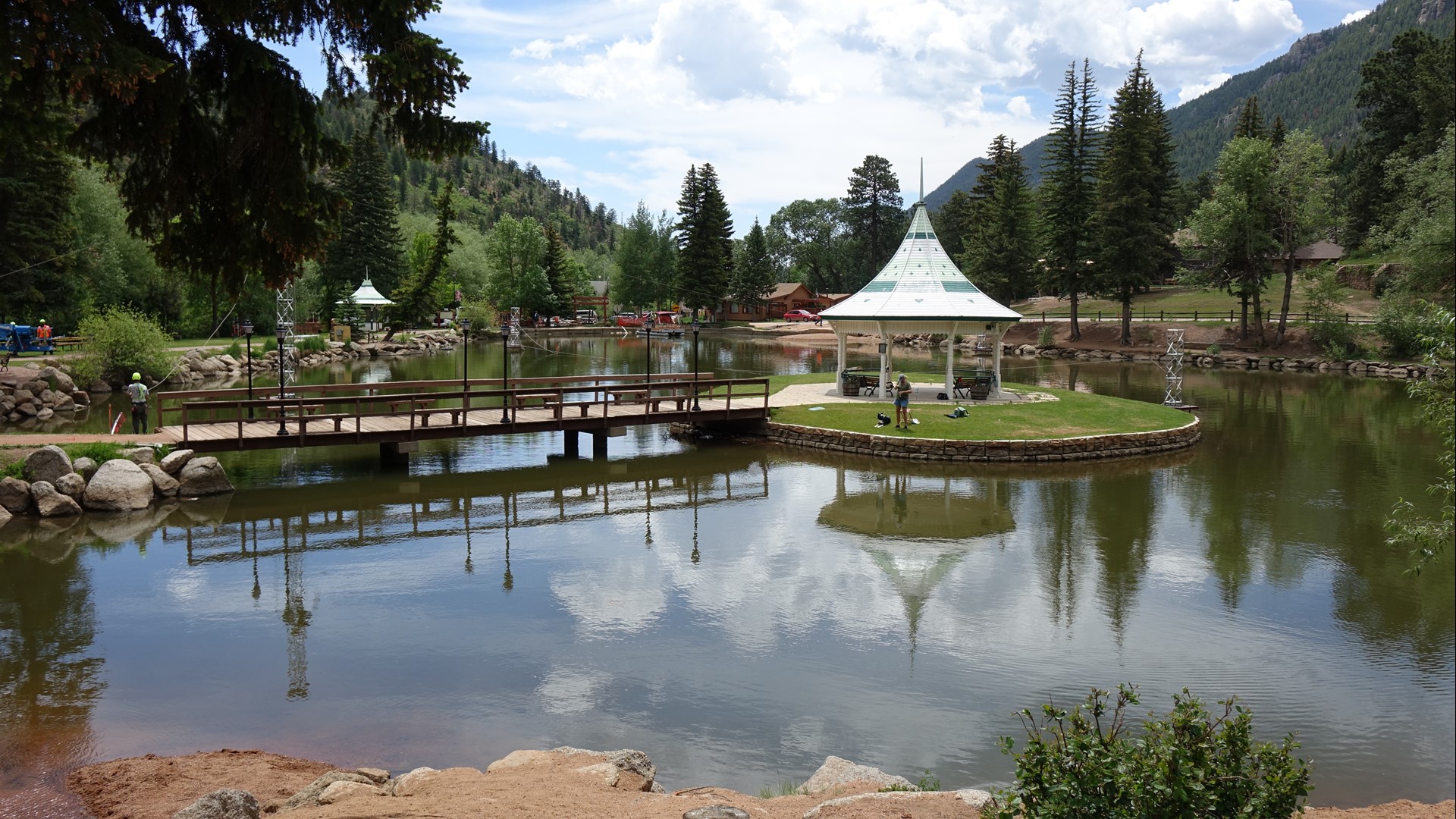 Green Mountain Falls has been a picturesque summer getaway for generations of families.

The 1.1-square-mile town straddles El Paso and Teller Counties and is surrounded on three sides by Pike National Forest. There are trails, waterfalls, wildflowers, creeks and the town lake, plus several local restaurants and shops.

This story is part of our weekly 9Neighborhoods series where we feature different towns and neighborhoods around Colorado and talk about what makes them unique. Join us for a photo tour of Green Mountain Falls Friday afternoon.

1 / 21
KUSA
Green Mountain Falls is a tiny community along Highway 24 between Colorado Springs and Woodland Park.

Since its start, Green Mountain Falls was designed as a summer resort town.

In 1887, a man named W.J. Foster bought the valley to develop into a tourism haven. At the time, there was only a ranch and one house at the location.

A year later, they had excavated a lake, built a gazebo, laid out streets and constructed tent cabins on the hills surrounding the small town. Two hotels, the Green Mountain Falls Hotel and Lakeside Hotel, followed.

Green Mountain Falls was incorporated in 1890.

By that time, a train station, grocery stores, newspaper, church, school and smattering of other businesses had popped up along the town’s streets.

The first guests to stay in Green Mountain Falls would often come on the Midland Railroad and rent the one-room cabins with wood floors and canvas tops for around $4-$7 per week.

Credit: Denver Public Library
Women, a man, a boy and a girl stand or sit and pose beside canvas topped tents in Green Mountain Falls c. 1890.

It was a vacation destination that quickly became tradition for hundreds of families.

Today, it’s many of those same families still coming to Green Mountain Falls every summer.

While having breakfast by the lake (more on that later), I got the pleasure of chatting with a gentleman who was in Green Mountain Falls for his annual family summer trip to the town.

He described remembering coming to his grandfather’s tent cabin by train. He said it has now been replaced by the “new cabin” – which is by nearly all standards also very old at this point – and he and all his siblings, who are now in their 80s and 90s, still come every summer they are able.

Green Mountain Falls has a year-round population of 871 people, according to the town’s website. But the number balloons in the summer.

An online search shows about 40 rental properties on Airbnb and just under 50 properties available to rent through VRBO. The historic 1910 Green Mountain Falls Lodge and the even older 1889 Outlook Lodge also still welcome guests.

The lake is still the centerpiece of the town.

In the 1930s, a boardwalk was added from the lake shore to the gazebo island, which had been accessible only by boat before that. The bridge that is there today was built in 1990.

The water is stocked with trout for summer fishing, and residents can often be found skating on the ice during cold winters.

The town is currently working on a rehabilitation project at the lake to add better shoreline access, new paths and a new fishing platform.

Now back to that breakfast I mentioned above. Before spending an afternoon at the lake, we’d suggest fueling up at The Pantry, a Green Mountain Falls tradition for over 60 years. If you don’t know what to order, you can’t go wrong with their famous cinnamon roll french toast.

It’s one of a handful of restaurants, taverns and shops. Green Mountain Falls even has a distillery that opened in 2013.

One of the biggest draws to Green Mountain Falls is easily accessible hiking.

The most popular is the hike to Catamount Falls.

You can take either the Thomas Trail or the Catamount Trail to the falls. There isn’t parking at either trailhead, so park in town and walk along the dirt roads to the official start of the trail.

If you choose the Catamount Trail, you’ll park off Ute Pass Ave and then walk about ¾ of a mile up Hondo Avenue to the trailhead. Then the falls are less than ¼ mile past that. The trail continues another 3 miles up to the North and South Catamount Reservoirs on Pikes Peak.

If you choose to take the Thomas Trail, park at Gazebo Lake and walk up Park Avenue to Boulder Street where you’ll meet the trail. This is about 0.3 miles. The 1-mile Thomas Trail will lead you first to Crystal Falls, then continue to Catamount Falls. From there you can either go back or continue onto the Catamount Trail for a longer hike.

The old Midland Railroad route has been turned into a popular trail along the river for jogging, biking and walking dogs.

For the last 10 years, a festival has brought unique public art to the town.

The Green Box Arts Festival was established in 2009.

Each July, it has brought a temporary art installation to the town, like musical swings in 2014, stick huts in 2016 and this year’s massive lighted sculpture hanging over the lake.

Called 1.8, the sculpture was designed by Janet Echelman. The name of the piece “refers to the length of time measured in microseconds that the earth’s day was shortened as a result of a physical event, the 2011 Tohoku earthquake and tsunami,” the Green Box Arts website says.

It has previously been displayed in Beijing and London. 1.8 will be displayed in Green Mountain Falls through September 3.

Explore the other neighborhoods we've visited: