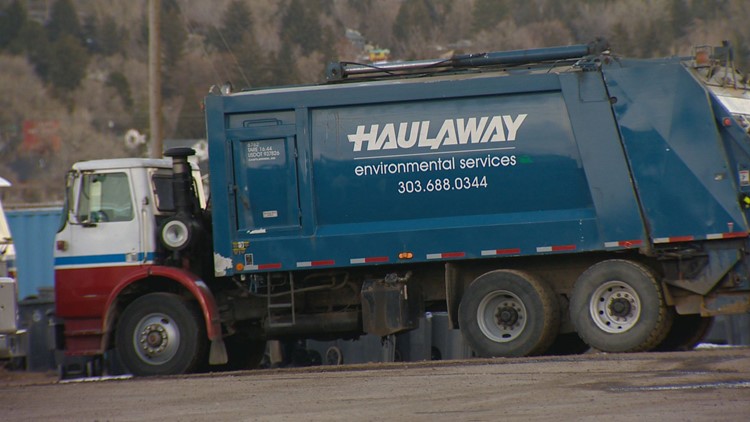 Photo by: Tom Cole, KUSA
Haulaway's team of mechanics is working to repair its fleet of trucks.

CASTLE ROCK, Colo. — The general manager of a solid waste service that has more than 23,000 customers in the suburbs south of Denver said the company is working to make things right after dozens of customers complained about delays with trash pickup.

Ron Law, the GM of Haulaway’s Colorado office, said the location has been without a shop manager since November. Since then, he said a shop that should have been staffed with five or six people only had two employees, and that multiple trash trucks have been out of commission in the interim.

“It’s bad timing, we’ve had some weather issues, but the large part is really the maintenance of the trucks,” Law said. “We haven’t had the personnel here who are necessary to provide maintenance to the trucks that I would feel comfortable rolling through a neighborhood with children running around.”

9NEWS received news tips from residents in Roxborough and Castle Rock who said they had gone more than two weeks without trash pickup.

Trash piled up outside a home in Roxborough.
Tom Cole, KUSA

Law said a new shop foreman just started at the company, and he hopes to pick up trash in areas that have experienced lapses in service as soon as Monday afternoon.

“We’ve really noticed there’s a lot of garbage out there,” said Suzanne Ciesla, who lives in a Roxborough neighborhood where she said trash hasn’t been picked up for about three weeks.

Haulaway has 50 employees at its Castle Rock office and roughly 40 trucks, according to Law.

“The only thing I can really say to the people is: Have patience,” Lopez said.

Lopez, an Army veteran, said he's trying to hire other mechanics he met in the military.

Law said Haulaway will offer vouchers to customers who have been inconvenienced by the service issues. He said the company received 40-50 complaints over the weekend.

“I just want to reiterate that I apologize for the service, but safety is the most important aspect,” Law said.