The termination will be effective Nov. 12 of this year. Airport officials hope to have a new contractor in place by early 2020 and said completion would be by 2025.

DENVER — Denver International Airport (DIA) officials are ending their agreement with Great Hall Partners LLC, the contractor responsible for construction work on the Great Hall Project, but still pledged to stick to the original budget.

“This was not a decision arrived at lightly,” said Kim Day, CEO of DIA. “A lot of factors contributed to the airport and the city’s decision.”

Day said they’re committed to sticking to the original cost of $770 million, but said they might have to change the scope of the project to meet that goal.

Day also said they expect to complete the project "well before" 2025, which was the latest estimate from Great Hall LLC and is four years behind the original projection of 2021.

WATCH BELOW: Former Denver councilman says he warned others that DIA construction would get messy

Great Hall Partners released a statement Tuesday saying they are disappointed with DIA's decision, and "categorically reject their allegations around safety and change directives." (Read the full statement below.)

Day said DIA officials were first notified in November 2018 that there could be issues with the original concrete at the airport. However, she said in February outside safety experts determined the concrete was safe for construction and the project could go on as planned.

“Since that time we have encountered mounting challenges from the project team, including safety concerns and costly delays,” Day said. “We also had to make a number of design decisions to accommodate various airport stakeholders to meet safety and operational needs.” 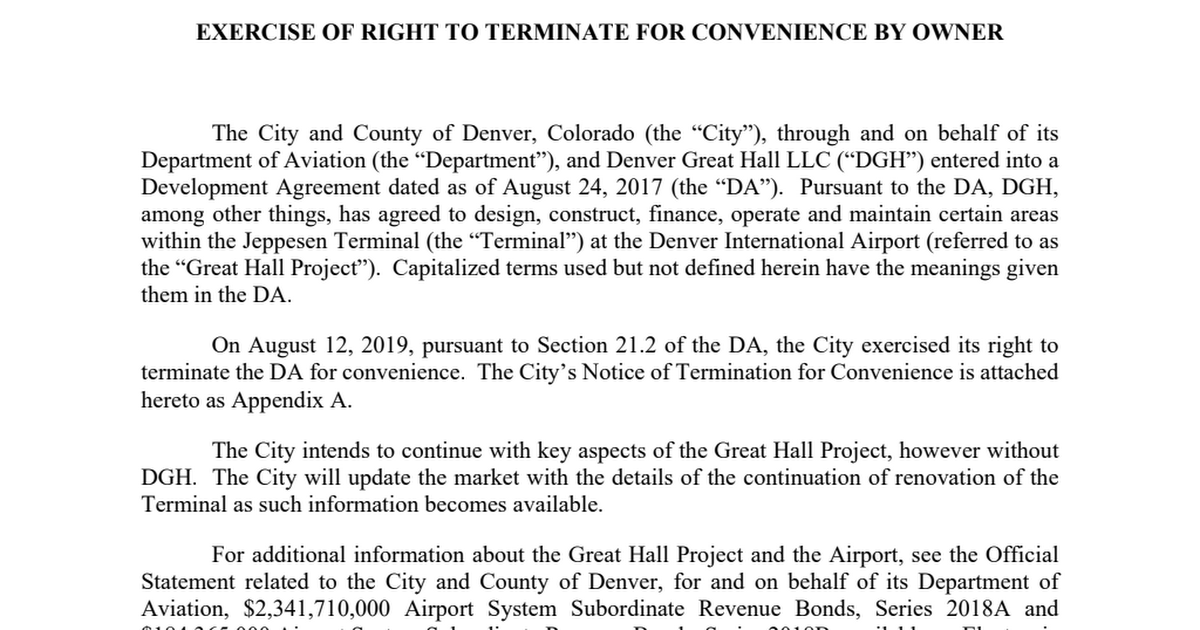 Day said Tuesday that Great Hall LLC had failed to secure the permits necessary to keep the project on time. She said the two sides entered into mediation in June, but remained very far apart in terms of cost schedule and safety.

"There is no question looking back we could have done things different," Day said. "We are not perfect. I think we in good faith thought we picked a partner that we thought was the right for us. Things changed on the partner side."

Termination of the contract with Great Hall LLC is effective Nov. 12, 2019, which is 90 days from the date of notice. As a result of the termination, the airport must pay a termination fee. That total has not yet been finalized, but Day said it would be made public.

Over the next three months, Day said they would be working to procure a new contractor to complete the work. They hope to have the contractor in place by early 2020.

Fitch Ratings said the rating on the project and the airport will not be affected by the termination. The organization said ending the partnership was a good thing, because staying in it would have added remediation costs and speculation. DIA will now keep concession revenues it would have given up.

“Denver is one of the nation's largest airports that has a strong revenue risk profile based on robust airline activities and sound airline agreement terms to recover all costs,” Seth Lehman, senior director for Fitch Ratings, said in an email.

DIA will maintain a AA-'/'A+' with a stable outlook on $189 million of project bonds. Ending the agreement allowed DIA to assert as much certainty as possible over the situation.

"The projected length of the delay, the added costs for remediation, as well as Denver's rejection of the claim for relief, collectively would have created a more speculative level of risk to the repayment on the project bonds issued by the developer," Lehman said. "Thus, the termination for convenience option provides the most certain outcome for debt repayment."

The new contractor will be tasked with construction only and not operations, maintenance or the commercial program, as was the case with Great Hall LLC.

The original project was a public-private partnership with Great Hall Partners, comprised of Ferrovial Airports, JLC Infrastructure and Saunders Concessions. The 34-year agreement called for Great Hall Partners to design and construct all improvements followed by 30 years of operations and maintenance within specific commercial areas of the terminal.

Great Hall Partners would have received 20% revenues. Now that the contract has been terminated, moving forward the airport will operate any commercial development and keep 100 percent of revenues.

We are disappointed with DEN’s decision and strongly disagree with their characterizations of how we have arrived at this point. We categorically reject their allegations around safety and change directives. As a firm, we have among the best track records in the world for adhering to the highest standards for safety. Indeed, the concerns we raised over concrete that was weaker than initially represented by DEN, were an important part of our safety analysis. In fact, the project contractor has a “recordable incident rate” of almost half of the national rate and has a zero “lost time injury rate.

Unfortunately, until this point, confidentiality provisions in our contract prevented us from rebutting over the last several weeks a stream of unfounded complaints and allegations. The reality is that the Project’s time and cost overruns are a direct result of the discovery of weak concrete in some areas of the Terminal, which DEN did not disclose to GHP at the outset of the Project, and more than 20 large-scale, badly timed and unnecessary change directives issued by DEN to the design they had previously approved.

As DEN itself said in its press conference today, our Company has extensive global experience in successfully delivering major projects such as this on time and on budget. We would have preferred to work with DEN to bring this important project to successful fruition and believed with thoughtful intervention that this was still possible. We wish the people of Denver well and are committed to a professional and smooth withdrawal.