Colorado’s minimum wage hike will impact some 480,000 jobs in the next three years including many in the restaurant industry.

After 42 years in business, preparation is second nature for Alfonso Nuñez and his staff at La Cueva Restaurant off East Colfax in Aurora. 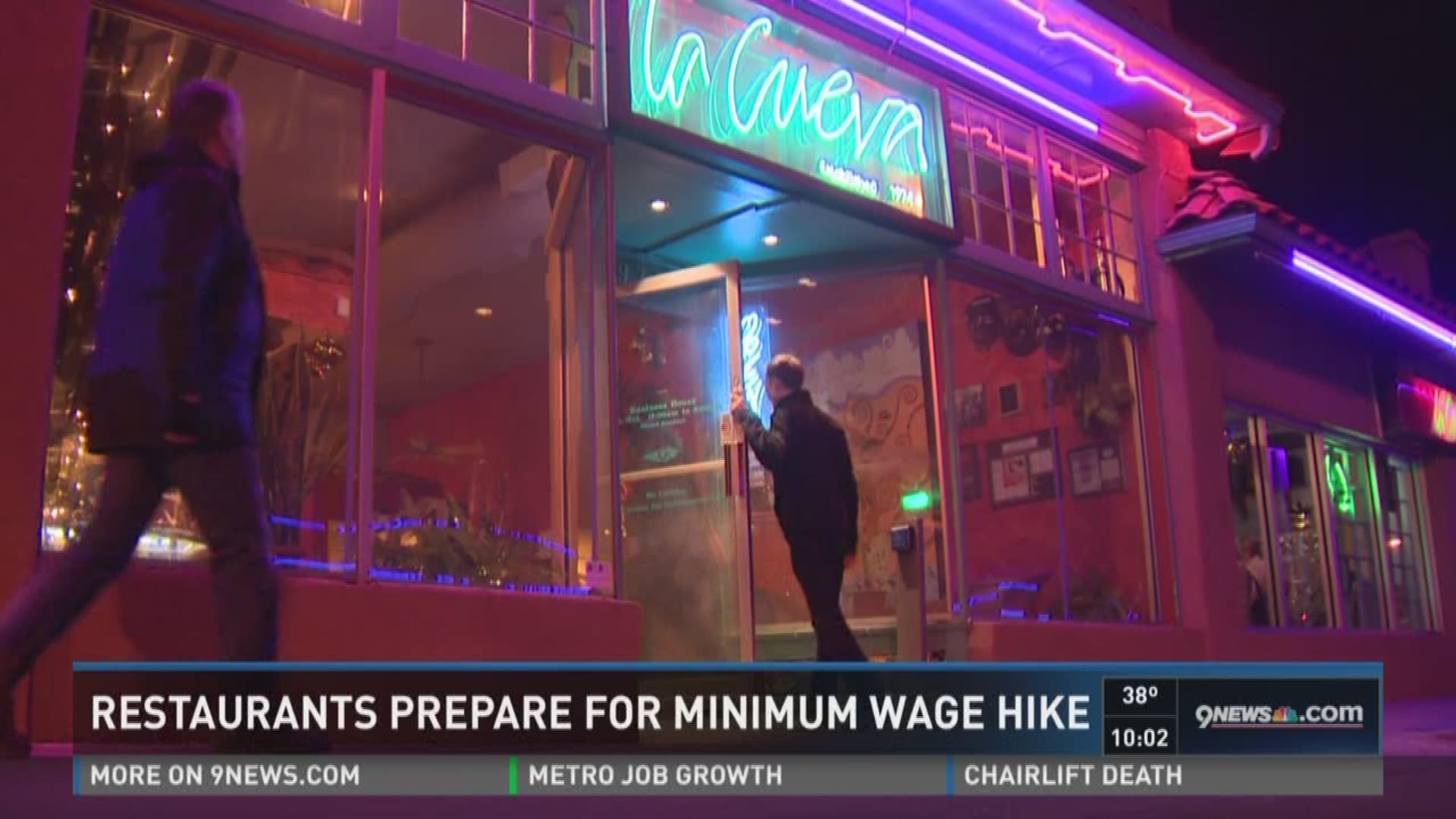 Colorado’s minimum wage hike will impact some 480,000 jobs in the next three years including many in the restaurant industry.

After 42 years in business, preparation is second nature for Alfonso Nuñez and his staff at La Cueva Restaurant off East Colfax in Aurora.

“I have a lot of experience in this industry,” said Nuñez, standing behind the bar of the restaurant where he started working at the age of 13.

“You want to serve a great product, but you want to be competitive as well,” Nuñez explained.

Nuñez is now preparing for January 1 and the wage changes he’d hoped would not take effect.

“Well, you know, obviously I have to raise prices,” Nuñez said.

Workers who rely on tips, like many in the restaurant industry, will also see incremental increases to their base wages. The Colorado tipped minimum wage will rise to $6.28 an hour in 2017 and will increase by 90 cents each year until 2020.

“Personally, I’m going to be making more, but it is going to affect the restaurant a lot,” said Fanny Palma, a waitress at La Cueva Restaurant. “It might lead [Alfonso] to close or who knows.”

Alfonso Nuñez said he raised prices on menu items at La Cueva as soon as Amendment 70 passed so customers wouldn’t “get sticker shock” on January 1. He said prices increased by at least 25 cents and up to a dollar on some items.

“His prices are fairly reasonable compared to a lot of restaurants,” said loyal customer, Phyllis Rider.

Rider said she and her family had been coming to La Cueva Restaurant on Friday nights for the past 30 years.

“It’s just homemade, family recipes. It’s delicious,” Rider said. “The margaritas are excellent. The best in town,” she added with a laugh.

Rider didn’t expect the price hikes to change her family’s Friday night tradition. While she sympathized with Alfonso Nuñez, she didn’t share his view on the passage of Amendment 70.

“I do feel like a higher wage is kind of warranted,” Rider said.

Nuñez said he’d only planned to increase prices to compensate for the minimum wage hike. Other restaurant owners have suggested they might cut staff members or their hours to offset increased costs. Nuñez said his staffing decisions depended on whether customers keep coming through the doors of the restaurant he’s known for more than four decades.

Despite his opposition to the amendment passed by 55.4% of Colorado voters, Nuñez seemed confident his business would make it to 2020 and beyond.

“I have to because I have all these families that have to support their families, so I have to get through it,” he said.