The matches are some of the first large major sporting events that Empower Field at Mile High has seen since the pandemic. 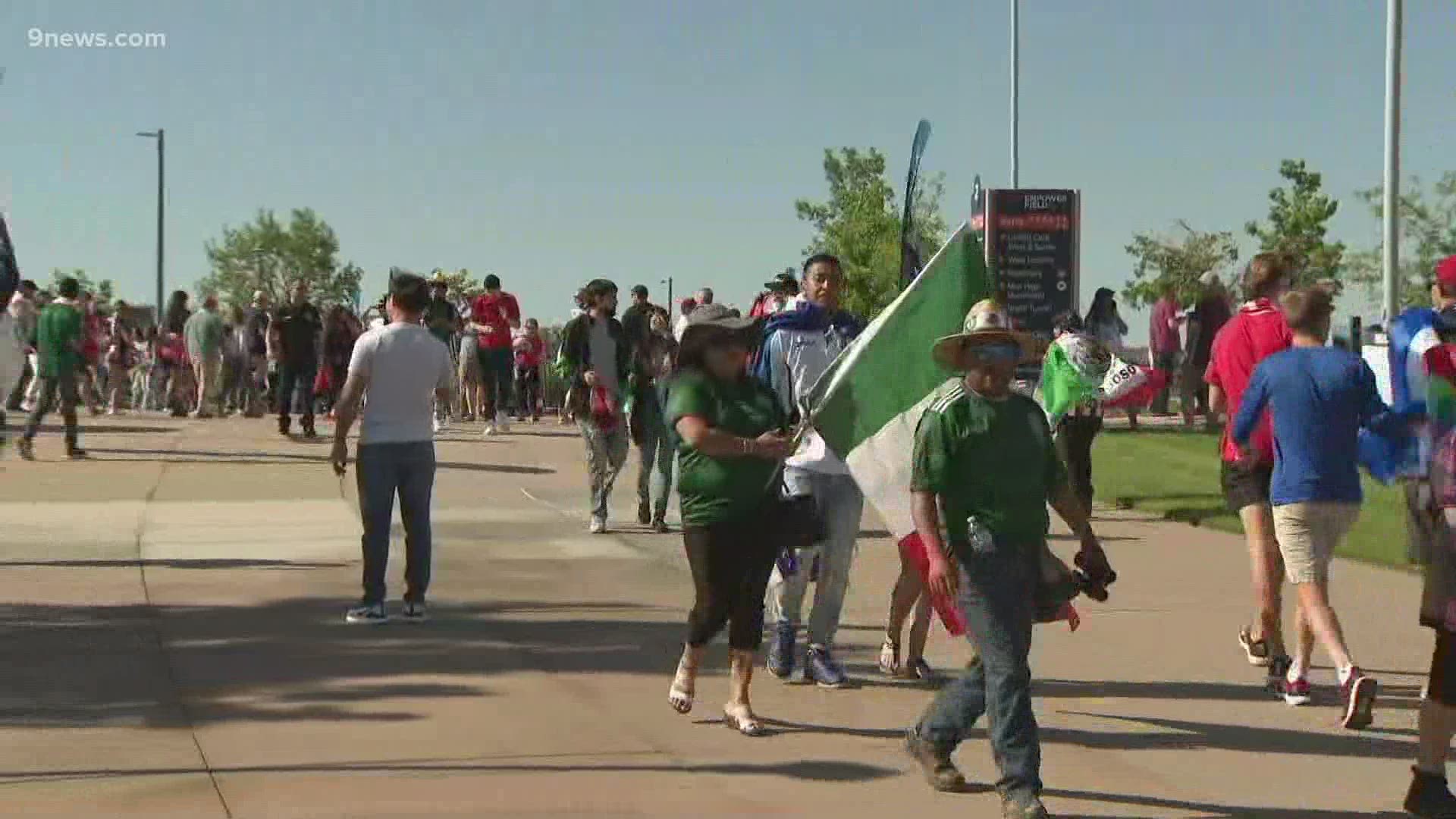 DENVER — It's likely that anyone driving by Empower Field at Mile High Thursday could tell something was brewing.

Pop-up vendors lined some streets selling soccer team merchandise and fans formed a choir with their blaring horns as they made their way inside the stadium to catch the CONCACAF Nations League Semi Finals.

Fans from all over, wearing all sorts of colors, marched towards to the stadium with friends and family getting ready to cheer on either the USA, Honduras, Costa Rica or Mexico.

The chance to see the Nations League trophy was on the west side of the stadium, but you had to make it past the DJ blasting upbeat music for the crowd first.

The matches are some of the first large major sporting events that Empower Field has seen since the pandemic.

The thousands of fans filing into Empower Field Thursday brought both an electric and what some might call a more "normal" atmosphere.

That feeling of normal was felt at some businesses in the area, like Tivoli Brewing Company no more than a mile or two away from the stadium.

The tap house on MSU Denver's campus, has been closed since November of 2020, but when United States supporters group the American Outlaws (Denver Chapter) reached out to see if they'd open up the space for hundreds of fans to tailgate for the big game, logistics manager Chris Thibodeau said he wasn't turning that down.

"It's like everybody's coming out of a cocoon for the first time," Thibodeau said, standing behind the bar he's manned for several years now.

The tap house opened up specifically for the tailgate. Thibodeau explained that they'll wait to fully reopen the tap house until students come back to MSU Denver's campus.

A 9NEWS crew was at the tap house at around 1:30, where there was a good-sized crowd starting to trickle in.

"So excited to just have people in an environment where they can sit down and have a beer and shake hands and hug it out," he said. "It's going to be huge. It'll be a good jump start. Sunday's gonna be a big day."

The Denver Sports Commission said there's not exactly an economic impact model for the return of sporting events due to limited capacity, but overall, more foot traffic could be good for surrounding businesses.

"...we know that kind of that confluence of many world class sporting events in our city kind of brings this summer a huge economic impact," said Matthew Payne, the executive director of the Denver Sports Commission. "...foot traffic, people coming back to hotels, restaurants, experiencing different parts of the city. That's what we're most excited about. Our office is about kind of boosting that local economy, at sporting events. And now we finally get to start seeing it happen."

But the commission also has it's eyes on the future, five years in the future in fact, when the 2026 World Cup happens in North America.

Payne explained that games at Empower Field, like the Nations League matches for example, serve as a time to help Denver make its case to potentially be in the running to be a host city for the world cup.

"So this gives kind of everyone a chance, soccer fans, locals, people around the country to kind of see what Denver is all about. We've got a great track record of hosting international soccer and big time events in the city," he said. We've got the hotels. We've got the airport to do it. We've got maybe one of the best stadiums in the country. So any time we can show that off, I think it helps us and benefits us as we try to become a hosting for the World Cup."

The Metropolitan football Stadium District, the stadium management company and countless others are looking forward to welcoming back fans in large numbers to empower Field at Mile high. Tonight‘s national league final soccer‘s match is the beginning of what we hope will be a very active summer of large gatherings welcoming a variety of large events including full capacity for the opening of the Denver Broncos football season. Employees at empower Field surrounding businesses and the community will no doubt benefit economical he as we all look forward to returning to “normal.“

The USA and Honduras play in one semi-final match, while Mexico and Costa Rica play in another.

The winner will face off in a final Sunday night.

Tickets sold out for Thursday night's matches, according to a release from Empower Field. Limited tickets for Sunday's final and third-place match can be purchased through Ticketmaster.com.

While Thursday's match was an escape from the long-standing impacts of the pandemic, UCHealth, in partnership with Concacaf, Empower Field and the Mayor's Office still found a way to help get COVID-19 vaccine doses out through a vaccination clinic at the stadium.