Q&A: Colorado restaurants are still in trouble but more are opening than expected

In an August survey conducted by the Colorado Restaurant Association, 65% of restaurants said they were in danger of closing within the next six months. 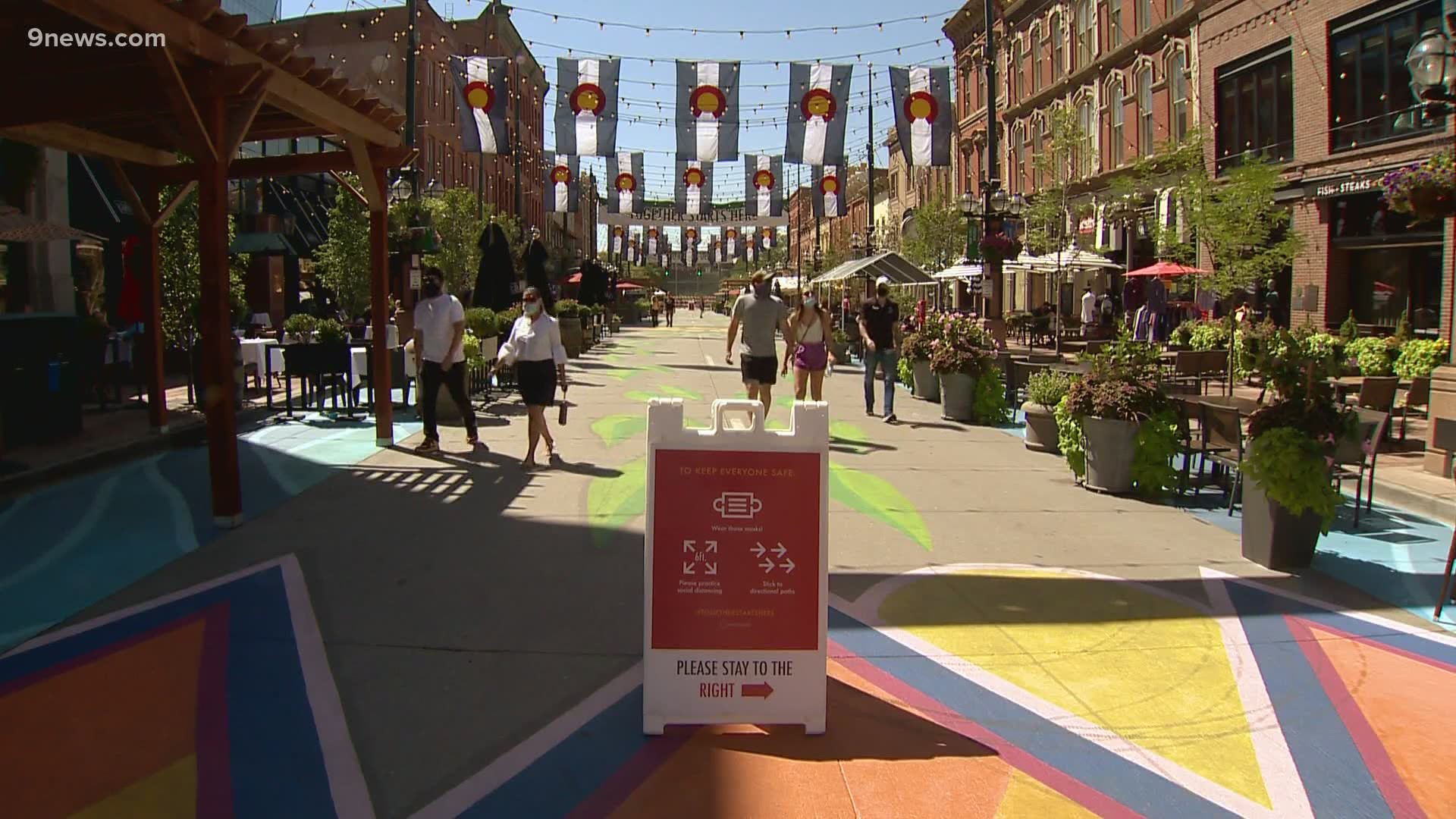 DENVER, Colorado — It's been nearly six months since Colorado restaurants were forced to close their doors to help curb the spread of COVID-19.

The struggling industry hasn't prevented new restaurants from opening their doors to the public for the very first time.

In an August survey conducted by the Colorado Restaurant Association, 65% of restaurants said they were in danger of closing in the next six months.

That figure was around 62% in July.

"Restaurants in Denver are on a razor-thin margin probably more than most people know," Jennifer Jasinski, executive chef of Rioja on Larimer Square and owner/proprietor of Crafted Concepts, told 9NEWS.

After 20 years in business, Jasinski was forced to close Euclid Hall Bar and Kitchen, one of the many restaurants in her portfolio.

Meanwhile, Kasie Waxman and her partners are preparing to open My Neighbor Felix, a Pan-American eatery in LoHi.

"I think the main response we’ve gotten is positivity," Waxman, a managing partner of the concept, told 9NEWS.

My Neighbor Felix will join the 120 restaurants that have opened this year, a higher than anticipated number, according to the Colorado Restaurant Association.

By Sept. 18 of last year, 200 restaurants had recently opened.

The Colorado Restaurant Association told 9NEWS there was a rebound in openings this August.

In March through July of this year, on average less than 15 restaurants opened per month.

"In August, there were nearly 40 openings," Laura Shunk of the Colorado Restaurant Association told 9NEWS.

It's too early to tell whether enough businesses are entering the market to replace the many that have been forced to close.

We wanted to know what opening and operating looks like for restaurants in the time of COVID-19 so we took our questions to Jennifer Jasinski and Kasie Waxman.

(Editor's note: Their responses have been edited for context and clarity.)

9NEWS: What kind of response do you get when you tell people you're opening mid-pandemic?

Kasie Waxman, My Neighbor Felix: I think the main response we’ve gotten is positivity. People are just excited. It’s like a shining piece of light through what’s been a little bit of a challenging time for everyone and especially people in the industry. I think that’s been one of the most exciting things. We’ve employed over 100 people. Being able to do that through a time when so many hospitality workers have been laid off has been inspiring and exciting.

9NEWS: When and why did you close Euclid Hall?

Jennifer Jasinski, Crafted Concepts: We closed Euclid Hall on March 16. The day we had to close down, it closed and we never reopened. A couple of months prior to us shutting down COVID-19 was happening and business was already declining really rapidly and that particular business of ours was already a bit in jeopardy. Restaurants in Denver are on a razor-thin margin probably more than most people know.

What are the struggles of operating a restaurant during this pandemic?

Jasinski: Struggles on a daily basis are the new way of doing business, in masks that are safe and we completely support. In the kitchen, it’s very hot. On the hotline it could be 110 and with the cooks in the masks, we have to break people to go into the walk-in to cool off.

We also have a full-time person on staff at each restaurant that just sanitizes all the time. They go from the bathroom, to the bathroom, table, handrail, doorknobs. All these things take more staff and we have smaller revenue. That’s been hard. We’ve had to add on staff to stay safe, which we want to do and we’re 100% behind but that’s costing money too. Then the extra sanitation supplies or masks for guests also costs money.

The price of many of these things like gloves and a lot of cleaning supplies has skyrocketed. Some manufacturers are really monopolizing on this and that’s at our detriment too. So, that’s a challenge every day.

What are the struggles of opening a restaurant during this pandemic?

Waxman: I honestly can’t think of anything on the negative side. When you are opening a restaurant during this time, people are so helpful. Even working with the city to get the barriers set and do outside dining. I mean, we added 110 extra seats out here. Working with the city and being able to do that has been an amazing process. So, I really can’t speak to the negatives. Anything that was a barrier or roadblock, we went right through it. Even ordering all the stuff we need, a lot of it had longer lead times but when you have a vetted team those things aren’t as bad so it really hasn’t been.

Have you discovered any silver linings?

Jasinski: There have been opportunities and we’ve been trying to make the most of them. I will say our staff at our restaurant, the people that have come back and some of the new people we’ve hired, they’re really all excited to have a great job, and very thankful to be doing something awesome. Our staff is really positive and I’m really loving that aspect. We’re really happy to be serving people and be back to work. I think that’s really good.

Waxman: This hiring round of employees was the most excited I’ve ever seen and I think it is because people were just so excited to get back into it. In a challenging time, bringing positivity to the community has been a special thing. Our local farmers and vendors that we’re working with, we can just feel the excitement. Everyone is just a little more excited than they normally would be when we make those phone calls to place orders and that’s a great feeling for everybody.

What’s your reaction to seeing the news of so many iconic Denver restaurants shutting their doors?

Jasinski: It brings it home. It’s sad. It’s jarring. Certain people say they’re going to close now because they’ve had a good run and they’re okay with it. I don’t own any of my property so if I owned my building, I could sell it and that would be a different story for me. So, everybody may have a different deal but it’s sad. We’re not going to go backward. We’re not ever going to go back to pre-COVID I don’t think. It’s just going to be a brave new world on the other side of it. Whatever that looks like.

What response are you expecting from the community upon your Grand Opening?

Waxman: Our Grand Opening is Sept. 12. I can’t wait. We’ve had a great response from the community. We’ve been building relationships and the owner has been doing that for years in the Denver area. The response in LoHi has been amazing. We picked this location for a reason. I think it’s showing through leading up to this opening how business owners and residents are just excited. I feel like we already have regulars even though we aren’t even open yet.

What advice do you have for restaurants just opening their doors?

Jasinski: I guess it’s the same advice that I’d always have. Take great care of the guests. That’s it. Do something better than somebody else does. Take good care of people. At the end of the day, those relationships make a difference. We’re still in the hospitality industry and that’s what we’re about. This is the business we’re in as hospitality and I think that didn’t go anywhere. And have a big bank account to fall back on. If you’re opening and you don’t have six months of working capital to fall back on, then don’t open. Wait until you have six months of working capital in the bank.

How long can Colorado restaurants survive this climate?

Jasinski: I can’t speak for other restauranteurs and their deals but I can speak for myself and right now with the extended patios, that’s one thing. Winter is coming. With the occupancy being what it is inside the restaurants, I know when I did the projections for my restaurants, it has us losing money for five months in a row. That’s not sustainable. Why would you do that? That’s not a good business model. We’re trying to figure out how to work with our landlords and ours here on Larimer Square has been fantastic. Everybody has somebody in this chain that maybe has to help out. Maybe the banks help the landlords and then the landlords help the employees. If we can all do a little bit and no system takes the chunk then maybe we’ll survive. Right now, some of these things are arduous just on our level. If we can get some partnerships and help, I think we can survive. If like Euclid Hall, you had no money in the bank at all and you were already struggling, I think it’s going to close a lot of those places, unfortunately.

How are you preparing for winter?

Waxman: We do have heaters inside and out. Our awnings come down, and we’re looking at doing dropdowns so we can seat the entire outside which would be 47 extra seats, so that’s a big part of it. We’re putting plexiglass barriers inside in between tables to be able to seat even if it’s not six feet apart which will be a big help.

Outside, we carefully spaced tables at a minimum of six feet apart. We thought mixing the picnic tables with some high tops and lower tops would create a feeling of actually being in a restaurant. A lot of times when you go outside and only see tables, it doesn’t feel as warm or inviting. We tried to think about creating a space and cuisine that we did inside so it doesn’t feel like there’s a difference.

What do you expect Colorado's restaurant industry to look like post-COVID?

Jasinski: I think there will be fewer restaurants. Denver has this great local feel. I love all the restaurants in Denver and bars. We’re not a ton of chains. I worry the chains will come in and snap up all these already pre-built restaurants. For example, Euclid Hall has all the stuff you already need in a restaurant. It’s not like an empty shell so you save a lot of money with an existing restaurant. I’m worried that will happen too. We have learned that maybe we weren’t being as efficient as we should have been pre-COVID. We have changed our business models a little bit to be more efficient.