Colorado to roll out Phase 2 of federal unemployment benefits Saturday

The state's labor department estimates $7.33 billion in unemployment benefits have been paid out since mid-March 2020. 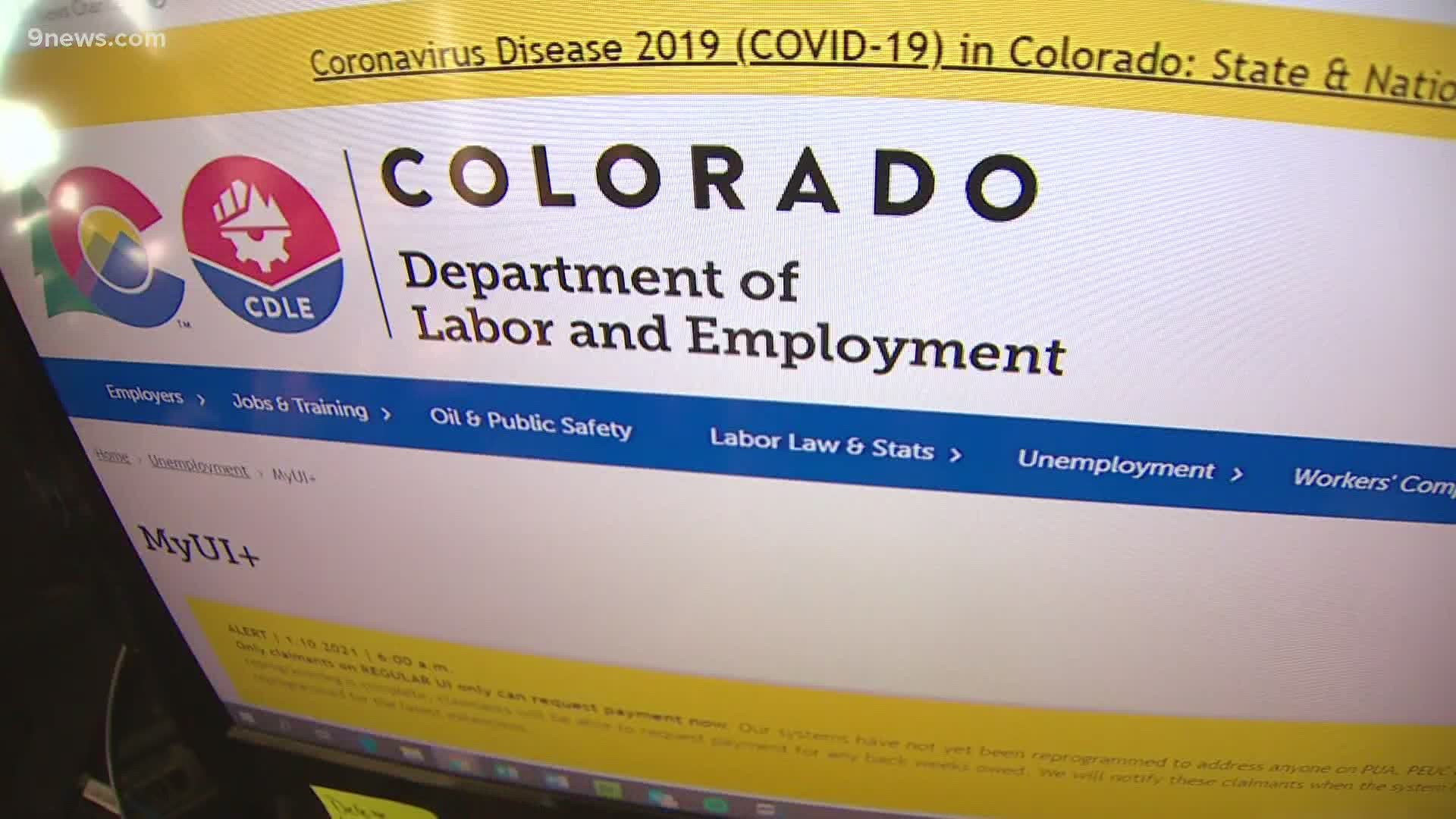 DENVER — The Colorado Department of Labor and Employment (CDLE) gave an update on the latest unemployment data and the rollout of federal benefits on Thursday.

CDLE announced that Phase Two of the rollout of federal unemployment benefits will begin Saturday. That will allow claimants who had previously exhausted benefits from before Dec. 26 to file for resumed benefits.

Around 289,000 claimants who may be part of Phase Two have been emailed instructions for resuming benefits, CDLE said.

Any claimants that have expired their initial Pandemic Unemployment Assistance (PUA) benefits will have to first file a regular regular unemployment insurance (UI) claim to verify their eligibility for state benefits. Anyone not eligible will then by able to file a PUA claim.

All claims that are reopened will either backdate to Dec. 27, or to the last week a claimant received payment if their benefits resumed during Phase 1.

Claimants who are eligible to file for benefits on Saturday currently will have to wait until Sunday to certify the weeks they are questing payment for, but CDLE said it is working on making that part of the process available on Saturday.

CDLE said it's call center will be open on Saturday from 10 a.m. to 4 p.m. to help answer questions about the Phase Two rollout, and said hours will also be extended next week.

Since the beginning of the pandemic in March 2020, CDLE has placed fraud holds on about a million claims.

Since the new My UI system was rolled out in January, just under 800,000 fraud holds have been placed. CDLE said it has been working through removing holds for legitimate claims, especially when the claimant reaches out to the department.

CDLE also said it recently has been sending out about 25,000 emails a day to claimants with information on how to verify their identity through ID.me.

According to CDLE, anywhere between 75% and 90% of all PUA claims are fraudulent.

CDLE estimated 12,151 initial UI claims for the most recent week ending Feb. 13 after adjusting for fraud, and reported $26.3 million in regular UI benefits were paid out.

In addition, 8,000 initial PUA claims were filed the same week, and CDLE notes these are not new claims, only reopened claims.

Some of the federal unemployment programs above provided slightly different benefits under the CARES Act, which expired Dec. 26. The details listed above are determined by the Continued Assistance Act.

RELATED: Unemployment claims jump to 861,000 as US layoffs stay high

The number of Americans applying for unemployment aid rose last week to 861,000, evidence that layoffs remain painfully high despite a steady drop in the number of confirmed viral infections.

Applications from laid-off workers rose 13,000 from the previous week, which was revised sharply higher, the labor department said Thursday. Before the virus erupted in the U.S. last March, weekly applications for unemployment benefits had never topped 700,000, even during the Great Recession of 2008-2009.