The Colorado Department of Labor and Employment said more than 24,000 Pandemic Unemployment Compensation claims have been flagged as overpaid. 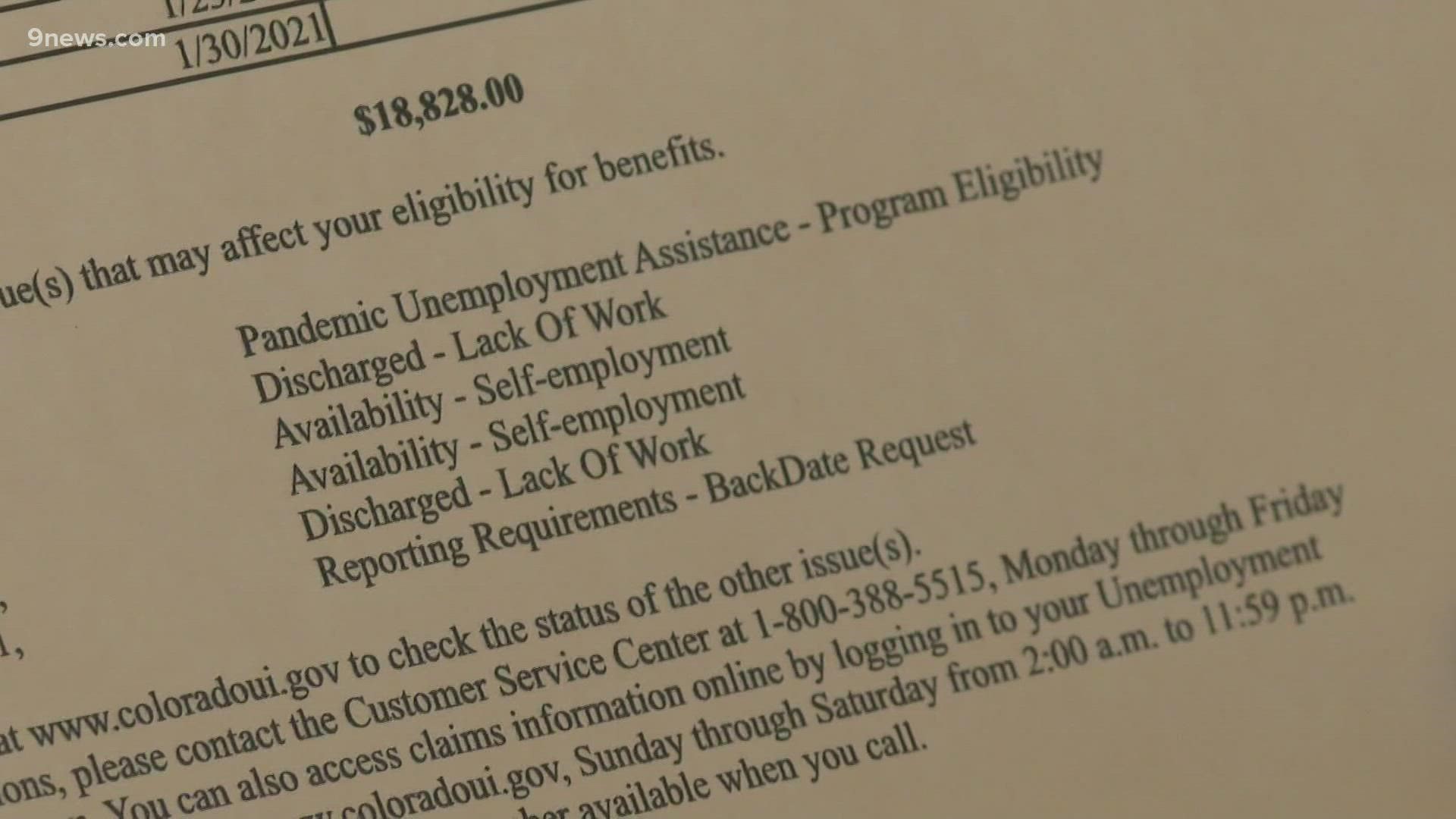 COLORADO, USA — The number of people being told to pay back their unemployment benefits could get a lot higher as a second group of claimants is asked to provide certain documents by Dec. 21, or risk paying back everything they received on Pandemic Unemployment Assistance (PUA).

PUA recipients previously were never eligible for unemployment benefits. The program was created just for people who were self-employed or gig workers when the COVID-19 pandemic began.

However, claimants are required to submit documents proving their employment, self-employment or planned employment status.

In June, the Colorado Department of Labor and Employment (CDLE) said it sent out notices to more than 23,000 claimants asking for those documents within 90 days, with the warning that those claimants would have to pay back benefits if the documents are not submitted.

That first group's 90 days ended last week, and people who didn't provide the right documents, or any at all, were told they were overpaid.

RELATED: Thousands of Coloradans asked to give back unemployment overpayments

Tammy Bartos, who received PUA benefits the entire time the program was active, was told she owes $18,828.

Bartos said she never saw the notices from CDLE asking her for documents, but CDLE said they emailed out four over the course of those 90 days.

Bartos can now appeal that decision and include the documents she was supposed to send.

Unemployment attorney Brian Stutheit has taken on so many clients with overpayment issues that he said he cannot take on anymore.

In an email, he said, "as a practical matter, I cannot imagine how the appeals section, staffed by a limited number of hearing officers, is ever going to manage all the thousands of appeals which the Division of Unemployment is forcing people to make."

The second group's 90 days begins this week, and CDLE said around 21,000 claimants received their first notice to send in documents.

Erin Joy Swank, an administrator of the Colorado Unemployment Facebook group, said there is a lot of confusion based on the recent comments.

Swank has written a blog to help people navigate the questions they have about unemployment benefits.

“If you got the questionnaire, you do need to fill it out and say what your 1099 wages were," said Swank. "Basically there’s a list online that says 'PUA documentation required' and they walk you through all the different things you can do.”

Swank suggests uploading the documents online so they aren't lost in the mail.

From August 2020 through Sept. 15 this year, CDLE said there were more than 18,489 overpayments in the PUA program alone.

CDLE said there are currently 550 claimants appealing their overpayment determination.

If an appeal is denied, recipients can file a waiver of financial hardship. But otherwise, CDLE said an unpaid overpayment can be taken out of state and federal tax returns.