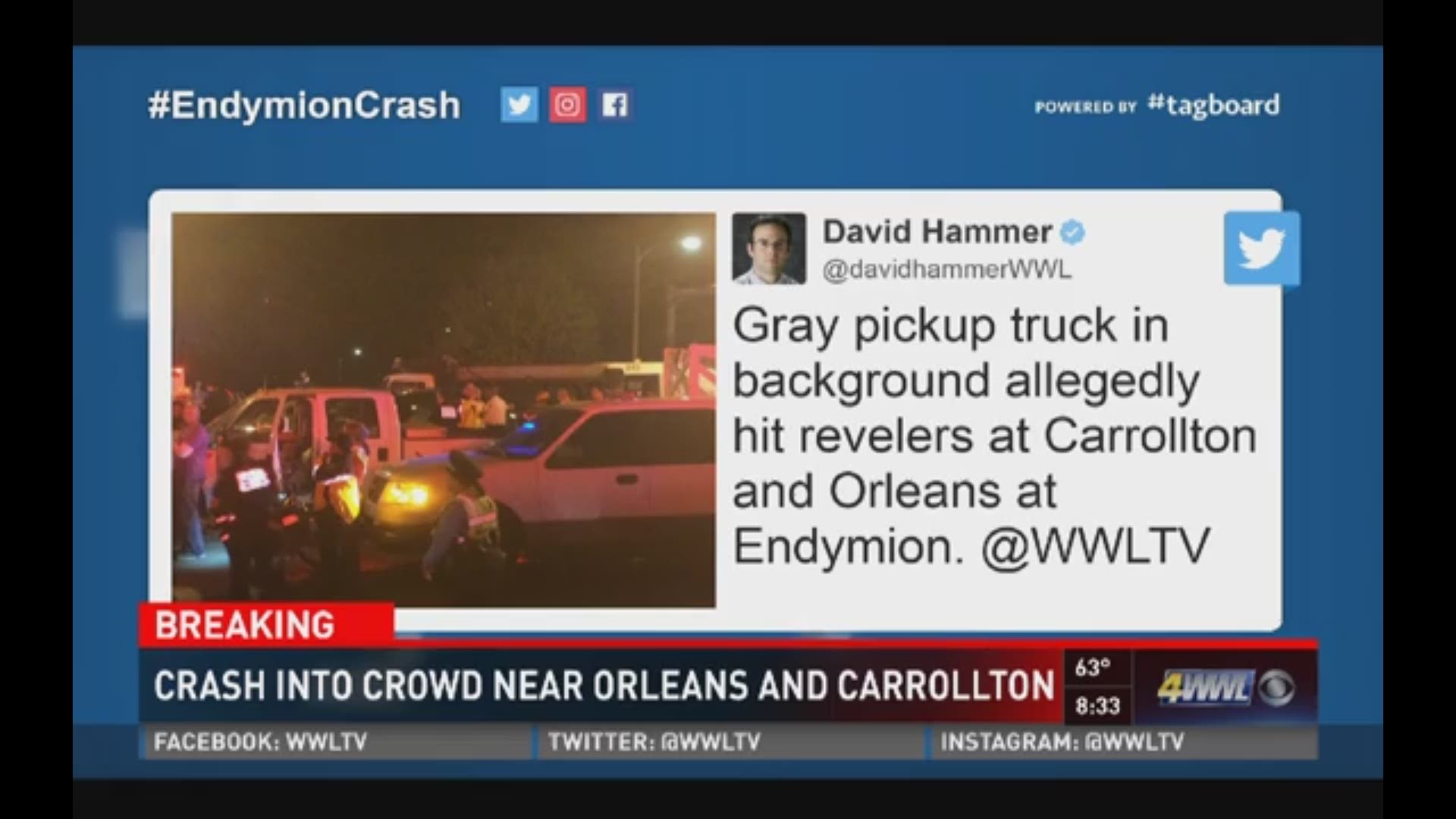 NEW ORLEANS -- 28 people were injured after a car ran into a crowd watching the Krewe of Endymion parade Saturday night in the Mid-City neighborhood of New Orleans.

21 people were transported to different hospitals in the city by ambulance. Currently, five people are being treated in the trauma center at those hospitals. The investigation is on going.

"Our thoughts and prayers are with the victims and their families," said Mayor Mitch Landrieu. "We are grateful that none of the injuries appear to be life-threatening. I want to thank all of our emergency personnel for responding quickly, aiding the injured, and apprehending the drunk driver."

Around 7 p.m., a truck traveling in the area hit two other cars before veering into an area of the neutral ground on Orleans Avenue near Carrollton Avenue where people were standing to view the parade.

Jake Chavez said he saw two men and two women who were hit by a pickup truck that apparently turned into the crowd watching the Endymion parade.

Two other cars were involved in the accident which happened near the intersection of Carrollton and Orleans Avenues. Witnesses say the truck, a Chevrolet pickup truck, was traveling down the open lanes of Carrollton Avenue headed toward City Park. According to police, the driver hit two cars and caused one of those cars to hit a third car. Police said the driver lost control and veered left into the neutral ground of Orleans Avenue.

At least one arrest has been made, according to WWLTV investigator David Hammer who was watching the parade nearby. He tweeted a photo of a man being taken away by police.

NOPD arrest made at Carrollton and Orleans. Several injured after car crashes into people by parade. @WWLTV pic.twitter.com/mBbg6SmLIh

During a press conference with Mayor Mitch Landrieu and NOPD Superintendent Michael Harrison said a total of 28 people were injured in the accident.

The 21 victims range in ages from 3-4 years old to up to 40-or-so years old. One of the victims was a female police officer who was working the parade.

Four Spring Hill College students were among those injured, according to reports from WKRG in Mobile, Al. The station tweeted that the president of the college was traveling Saturday night to New Orleans.

Police said 10 ambulances took those who were injured to seven different hospitals. Several people were pinned underneath the dump truck in the aftermath of the crash. Paramedics and civilians raced to help the nearly two dozen injured. None of their injuries appeared to be life-threatening, according to EMS Director Jeffrey Elder.

Man arrested at the scene where truck crashed into Endymion parade crowd, injuring 21. What we know so far: https://t.co/7oEliMvyUh pic.twitter.com/yFz4etoT0Q