Said the Broncos' head coach: “Maybe, we’ll win enough this year that the bank will be full next year.” 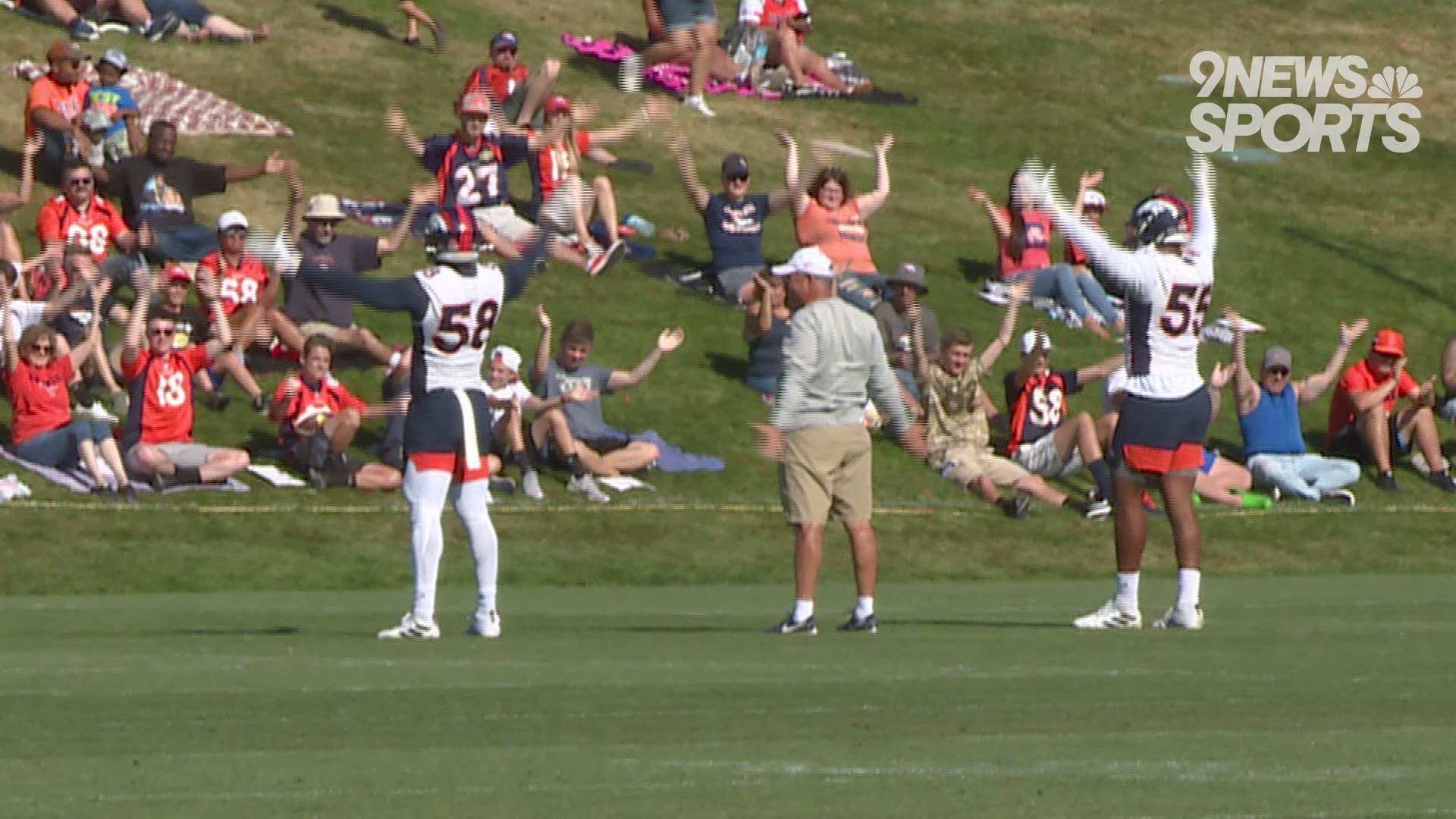 ENGLEWOOD, Colo. — Each day at Broncos training camp this summer started the same.

There were up to 90 players stretching followed by star pass rusher Von Miller engaging the fans gathered on the grassy berm at UCHealth Training Center in a rhythmic clap.

Just call Vic Fangio the coach of the people.

"I was glad to have them out here and I thank them for coming," Fangio said of the fans. "Maybe, we’ll win enough this year that the bank will be full next year."

Although the berm crowds were smaller than usual this year, they weren’t bad considering the Broncos are coming off back-to-back seasons of 5-11 and 6-10.

Including their stadium practice, the Broncos drew 56,395 fans to training camp, or an average of 3,525 over 16 dates.

RELATED: In return to field, Sanders overcomes not just Achilles injury, but 'tightrope' surgery to other ankle

Fangio was asked how close the team is to finding a returner.

Last year, the team signed veteran Adam “Pacman” Jones off the street to serve as a No. 3 cornerback and punt/kickoff returner. The aging Jones popped a hamstring in his second game and did little more.

The Broncos don’t want to do that again, but unless one of their rookies steps up as a punt returner in the next week or two, the team may again be forced to look outside their building to claim one.

The Achilles surgery on Emmanuel Sanders’ left ankle last December was common knowledge. The “tightrope” surgery on the star receiver’s right ankle a month later was kept secret until 9news reported it Monday.

So why did Sanders keep his second ankle injury quiet for so long?

"I kept that under wraps because I didn’t want you guys writing stories: ‘There’s no way he can battle through two surgeries,'" Sanders said. "So, I said, ‘You know what? I am just going to keep it under wraps and let you guys know when I get myself back healthy and feeling good.'"

Sanders is expected to play in the Broncos’ next preseason game, Monday night against the San Francisco 49ers.

RELATED: RTD options for getting to Bronco games this season

For the first time since he suffered the third ACL of his career 10 months ago, tight end Jake Butt took 11-on-11 team reps with the first team Tuesday.

One caveat: The team was not practicing in pads Tuesday but in shorts and skeleton shoulder pads so there wasn’t the typical contact. Still, it’s progress.

Meanwhile, the team also had tight end Troy Fumagalli shifting around in the fullback/H-back position. Fangio said this could be the solution to replacing injured fullback Andy Janovich for the first two to four games of the season.

Undrafted rookie pass rusher Malik Reed, the subject of so much media attention in recent days, did not practice Tuesday because of tweaked side muscle. Fangio said Reed also wouldn’t practice Thursday but indicated he hoped to have him available for the joint practices Friday and Saturday against the 49ers.

Another backup outside linebacker, Aaron Wallace, re-aggravated his hamstring to the point he sat out practice Tuesday.